By: StockMarket.com
Are These The Best Semiconductor Stocks To Buy Right Now?

Semiconductor stocks performed extremely well in the stock market in 2020. And analysts are expecting more great things in the industry in 2021. Simply put, the tech sector continues to thrive because it owes its massive success in no small part to the semiconductor industry. This was likely due to a surge in demand for all things digital as more people were forced to stay at home due to the pandemic.

Some of the top semiconductor stocks like Advanced Micro Devices (NASDAQ: AMD) fell despite topping Wall Street estimates with their first-quarter earnings last week. But there isn’t a need to write them off just yet. In fact, the pull-back provides some great entry points for investors. And a lot of that pull-back could have something to do with the chip shortages. However, if you have a long-term horizon, it’s safe to assume that technology is only going to continue to grow.

With the increasing digitization of the things we are using on a daily basis, we simply can’t ignore the fact that our life is increasingly dependent on semiconductors. Be it your favorite electric vehicles or the new Apple (NASDAQ: AAPL) products that you are anticipating, all of them need semiconductors. In addition, the rising popularity of cryptocurrencies has also resulted in shortages of graphic cards as miners buy them in bulk. That said, the surge of demand for these products is likely to bode well for the companies manufacturing them. With all these in mind, do you have this list of top semiconductor stocks to buy in the stock market today?

Intel is a semiconductor titan that needs no introduction. The company recently reported its first-quarter earnings where revenue came in 1% lower year-over-year to $19.7 billion. Intel’s first-quarter growth cleared Wall Street’s low bar, but its mixed guidance signaled its troubles would persist throughout this year. Following this report, INTC stock has been on a steady decline. But could its recent capital expenditure plans turn things around for the stock?

The company plans to spend more money on building semiconductors and less on stock buybacks. In March, the CEO announced plans for a $20 billion expansion of Intel’s chip-making facility in Arizona. Now, Intel is aiming to begin manufacturing most of its products in-house. But it will still increase its use of third-party fabricators.

Intel also said on Sunday that it will spend $3.5 billion on an upgrade for its factory in New Mexico. This is part of a plan to expand the company’s domestic manufacturing investments. With Intel looking to build more of its chips in the U.S., would you consider INTC stock to be an undervalued stock if you have a long-term horizon?

Another top semiconductor stock to watch now would be the Taiwan Semiconductor Manufacturing Company (TSM). Notably, TSM is the largest semiconductor manufacturer globally. Accordingly, you could argue that it would stand to benefit significantly from increasing worldwide demands for semiconductors. But its recent price action is certainly holding investors from diving right in. 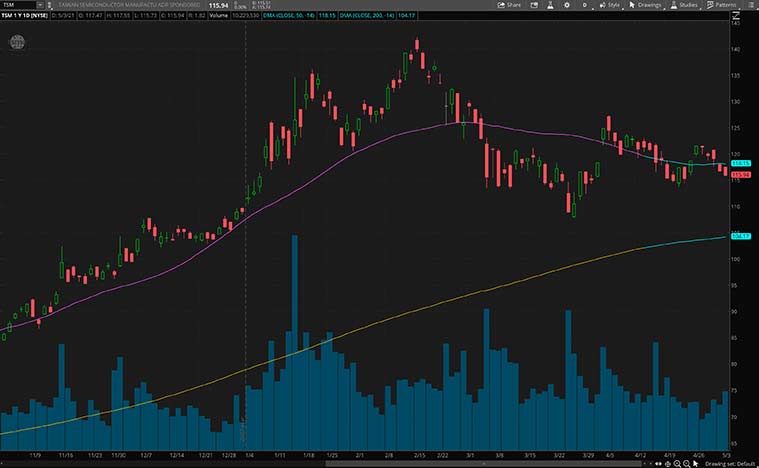 While the fundamentals suggest a screaming buy, the stock has been moving sideways in recent weeks. From its first-quarter report, TSM’s sales came in 16.7% higher year over year to $12.7 billion. It was the company’s third straight quarter of record sales as the global economy rebounds from the coronavirus pandemic. If any indication, TSM is growing fast, especially for a company of its size.

Despite its sizable gains over the past year, TSM does not seem to be resting on its laurels. For the uninitiated, 75% of TSM’s first-quarter revenue came from smartphones and high-performance computing. More impressively, the company is also seeing rapid growth in other industries like the Internet of Things (IoT) and automotive. Admittedly, TSM stock may not be cheap at a P/E ratio of 31 times. But with its market-leading position and growth trajectory, would you pick up TSM stock as it slides?

Nvidia focuses on the development of personal computer graphics, graphics processing units (GPU), and also on artificial intelligence. The company is the inventor of the GPU, which has sparked the growth of the PC gaming market. Essentially, Nvidia has redefined modern computer graphics, high-performance computing, and artificial intelligence. Its pioneering work is reshaping trillion-dollar industries like transportation, healthcare, and manufacturing. 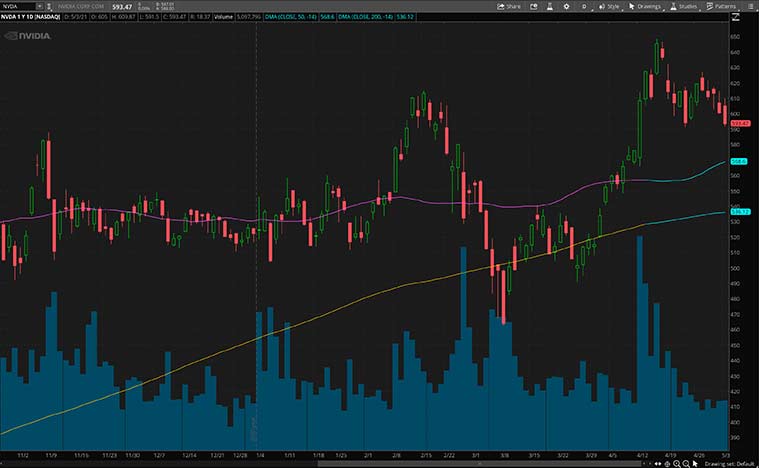 Recently, the company announced that its AI inference platform, newly expanded with Nvidia A30 and A10 GPUs for mainstream servers, has achieved record-setting performance across every category on the latest release of MLPerf. MLPerf is the industry’s established benchmark for measuring AI performance across a range of workloads spanning computer vision, medical imaging, recommender systems, speech recognition, and natural language processing.

Given how the AI industry still has a lot of room for growth, Nvidia certainly has a competitive edge with its products. Evidently, companies like Cisco (NASDAQ: CSCO) and Dell Technologies (NYSE: DELL) are expecting to integrate the GPUs into their highest volume servers starting this summer. With that being said, will you consider adding NVDA stock to your watchlist?

With a pressing issue like global chip shortage, it doesn’t take a genius to know that semiconductor companies are trying to ramp up production to meet demand. Therefore, semiconductor companies may be looking for ways to mass-produce with lower costs and improved performance. And that’s when advanced materials and process solutions company Entegris comes into the picture. 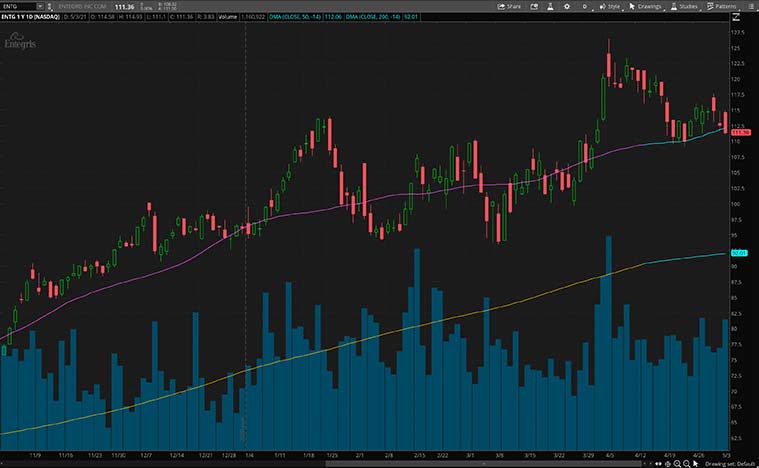 The company generates most of its revenue from semiconductor manufacturers. Having said that, I guess it’s safe to say that Entegris is a pure-play on the ramp-up in semiconductor chips globally. The more semiconductor manufacturers plan to increase their supply, the more Entegris stands to benefit. From its latest earnings call, the company’s management upgraded its expectations for its end markets to grow 13% to 14% in 2021 versus a previous estimate of 7% to 8%.

If the strong management guidance is not convincing enough, Wall Street analysts also expect the company’s sales to hit $2.4 billion in the coming year. These analysts appear very confident that ENTG stock will receive a boost when many semiconductor manufacturers are scrambling to increase their production capacity. You could also think of ENTG stock as a pick-and-shovel play in the space. Considering all these, will you be watching ENTG stock?