Penny Stocks to Buy Under $2 On Robinhood, Are They Worth It?

Finding penny stocks on Robinhood is a relatively straightforward process. However, it takes a little bit of know-how to do properly. While most penny stocks tend to trade the same way, we have to consider that Robinhood does not allow access to OTC or over-the-counter markets. This is where a large number of penny stocks are sold. You might be wondering, why are so many penny stocks to watch on OTC markets? And there are a few reasons for this.

For one, listing on large exchanges such as the NYSE or NASDAQ is a very expensive and thorough process. Because penny stocks often do not have access to the same capital as blue chips, this can be out of the question for some.

Additionally, listing on big-name U.S. exchanges involves the release of a large quantity of information to the public. On the OTC market, these requirements are not nearly as stringent, resulting in easier access. And, listing on the OTC market offers similar capital benefits as listing on a large exchange, without the major funding behind it.

The term penny stocks itself simply means any stock that is trading under $5. Given that there are a lot of stocks that are in this bracket and not on the OTC market, finding penny stocks on Robinhood is more than plausible. And while narrowing that search to under $2 may make it more difficult, there are still hundreds of options to choose from. With this in mind, here are three penny stocks to watch under $2 on Robinhood.

Jaguar Health may be a penny stock you’re familiar with if you read pennystocks.com often. If you’re not, let’s give a quick brief on the biotech company. Jaguar is a commercial-stage pharmaceutical company working on the development of novel, plant-based, non-opioid, and sustainably produced medicines. It manufactures compounds for use in both people and animals. While its range is broad, Jaguar focuses on GI-related ailments. This includes treatments for chronic diarrhea and other gastrointestinal disorders.

Additionally, its wholly-owned subsidiary, Napo Pharmaceuticals Inc. is working on similar medicines, produced from plants harvested in rainforests around the world. Jaguar’s flagship product known as Mytesi, (crofelemer), is a U.S. FDA approved treatment for the symptomatic relief of non-infectious diarrhea in those with HIV/AIDS.

It is the only oral plant-based prescription medicine approved under the FDA Botanical Guidance for this indication. Last week, the company announced an upsized at-the-market offering for $15.3 million with Ladenburg Thalmann & Co Inc.

“We are very pleased to have expanded the capacity of the ATM program. While we do not anticipate issuing any shares at this time, the upsized ATM program is available to provide the Company with future funding, if needed, at the prevailing market price.”

This news helps to show that Jaguar should have plenty of funding to embark on further commercialization of Mytesi and other compounds in its pipeline. So, is JAGX a penny stock to watch? 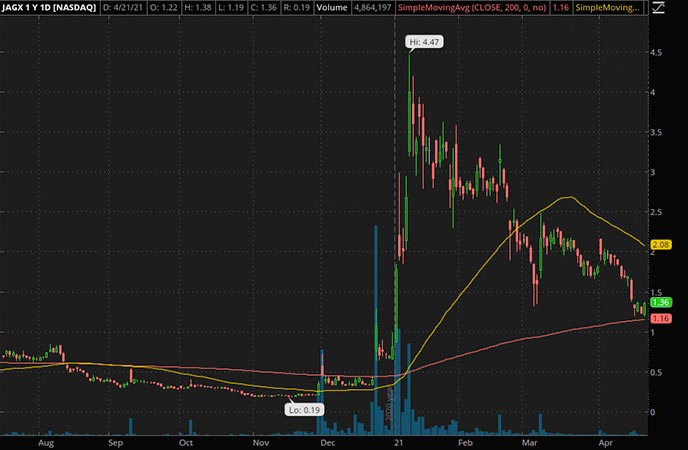 If you’re looking for a fully integrated biotech penny stock, Celsion Corp. could be worth keeping an eye on. Celsion has continued to garner attention due to its large pipeline and the relevance of certain drugs within it. The company is a producer of innovative cancer treatments. This includes immunotherapies and DNA-based therapies.

Additionally, the company has been developing a nucleic acid vaccine production platform that is focused on SARS-CoV-2. In its pipeline are compounds such as GEN-1, a DNA-based immunotherapy for the localized treatment of ovarian cancer. Additionally, it is working on ThermoDox, which is a proprietary heat-activated liposomal capsule containing doxorubicin.

ThermoDox is currently under investigation for its potential in treating several different types of cancer. A few weeks ago, Celsion announced the closing of a $15 million registered direct offering. This offering includes 11.53 million shares at $1.30 per share. This fundraising deal should help to secure growth in its pipeline into the foreseeable future.

What’s really interesting however is its work on finding a potential Covid-19 vaccine with its nucleic acid platform. Any company involved in this sector has become very notable over the past year or so. While this alone is not enough to consider CLSN a penny stock to watch, it is something for investors to consider. So alongside its sizable pipeline of assets, CLSN could be an interesting company to put on your list of penny stocks. 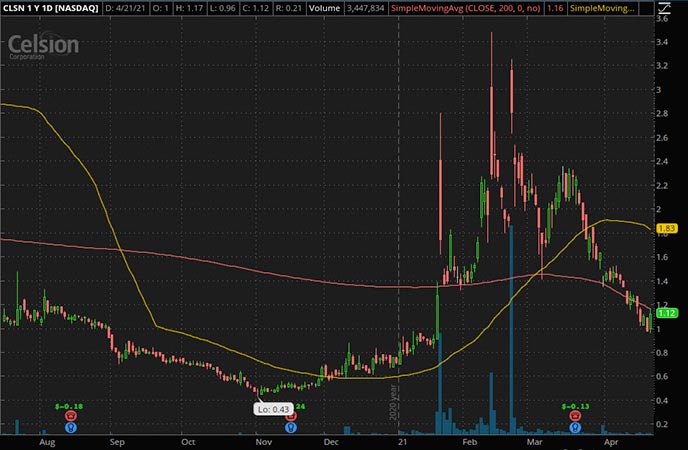 UAMY is a vertically integrated mining penny stock, specializing in the production of precious metals. This includes zeolite and of course, antimony. For those who are not familiar, antimony is in use heavily in the electronics industry. This includes its usage in devices such as semiconductors, infrared detectors, and diodes among others. It is also included in paint and metal bearings to batteries and solar panels.

Its work on batteries is quite important as this puts UAMY into several different categories. This includes electric vehicles and tech. While it isn’t necessarily a pure-play EV or tech stock, it does have indirect exposure to these markets. A few months ago, United States Antimony announced the completion of a $14.3 million registered direct offering of common stock.

It states that the funds will go toward the improvement of its Idaho, Montana, and Mexico-based zeolite/antimony mining properties. Additionally, it should be able to retire certain outstanding debt obligations, which could help to increase the significance of its next balance sheet.

Recently, the Biden Administration restated the importance of using renewable energy. This includes a push for everything from solar power to EV’s and more. Because antimony is in use heavily in these applications, UAMY could be an interesting addition to your penny stock watchlist. Whether or not it is worth watching right now, however, remains up to you. 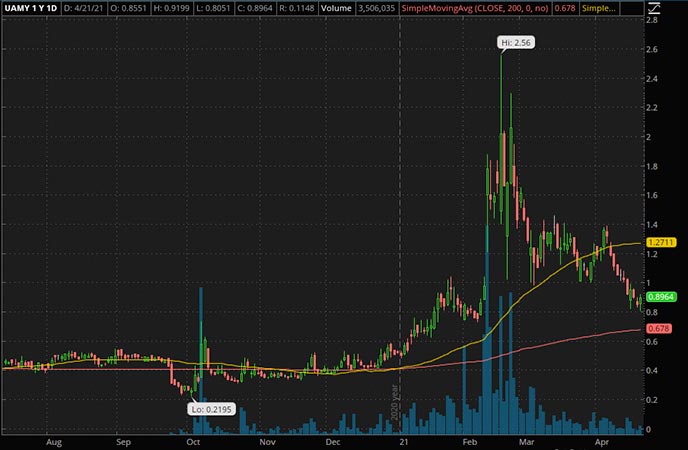