By: Get News
With his unique blends of retro synth and vibrant R&B music, up-and-coming singer and songwriter Santa Sallet is rising up the charts as an authentic and mesmerizing force to be reckoned with, as he releases new single “Just Another Tuesday”.

Washington, DC, USA – April 20, 2021 – An up-and-coming phenomenon Santa Sallet is a true powerhouse, blending hip-hop with soulful Retro Synth music for his latest single “Just Another Tuesday”. Aiming to break into the industry with musical compositions that are rich and dynamic, Santa Sallet is a budding sensation. 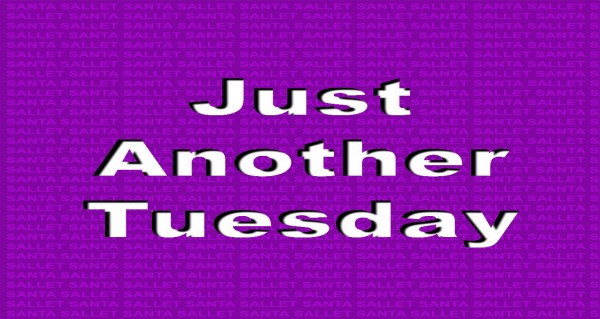 Focusing on the illusion of a white car, Santa Sallet’s rejuvenating new single “Just Another Tuesday” is an impression of nostalgic synth beats infused within electric retro music. The rising artist was inspired during a laid-back freestyle session with a friend and co-label mate, Nemizzo, while driving back home, when he decided to pen down the single, which has a subtle yet intriguing flavor to itself.

Having released on September 08th, 2020, and dominated by personal anecdotal lyricism, the new single is an iconic throwback to retro music and aesthetics. Driven by striking beats and music, “Just Another Tuesday” is only the first chapter to the experimental and thrilling new mixtape, with productions by Santa Sallet, aptly titled “Plutography”. Produced under the label of MSP Records, the electric mixtape is rooted in inspirations of Eastern Jazz blended with Salsa beats and Trap music. Giving off a vibrant 70’s vibe, the single is one that has already caught the attention of critics and fans alike, instilling listeners with a hypnotic and rhythmic vibe.

Known for creating musical compositions that have a catchy retro-futuristic vibe, hard hitting samples, and synth rhythms that inspire, Santa Sallet is all set to soar with “Just Another Tuesday”. The stunning new single is dotted with a captivating tune and beats that are both memorable and enriching. It is bound to become the next breakthrough from the genre of Hip Hop and Synth as a colorful single that excites and enthralls.

Check out his new single and learn more about Santa Sallet on the links below and/or reach out via the contact information for interviews, collaborations, or promotional access.

Up-and-coming singer and songwriter Santa Sallet is a talented rapper, producer and businessman who hails from Washington, D.C.

Inspired and motivated to make a strong and memorable impression in the fast-paced world of Hip-Hop, Santa Sallet grew up in a musically active surrounding, learning from the best of Hip Hop maestros. Imbuing his music with a nostalgic and mellow vibe, the budding singer and producer intends to establish himself as a versatile and eclectic musician. Staying true to the roots of Hip-Hop and the Caribbean, while interspersing his compositions with a personal narrative touch, Santa Sallet has a unique and invigorating outlook.

With his striking new single “Just Another Tuesday” which released in January 2021, Santa Sallet is gearing up towards success as he releases his invigorating new mixtape ‘Plutography’.