IN TIMES OF UNREST HERE’S WHY THEY CHOSE MERIDIAN BARRIERS 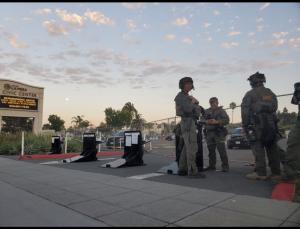 Officers with the Archer 1200 Barriers

MERIDIAN PRIDES ITSELF ON RAPID RESPONSE TO RIOTS

Meridian barriers were our solution, They were quickly installed, very maneuverable, and provided the level of safety we were seeking.”— Captain Matt Nicholass, La Mesa Police Department

LOS ANGELES, CA, US, April 19, 2021 /EINPresswire.com/ -- Civil unrest in many U.S. cities this past year leading to riots and costly damage to property has increasingly put a heavy burden on police and emergency services. And there so often, alongside authorities, has been Meridian Rapid Defense Group.

Whether it meant sealing off sections of cities during demonstrations or ensuring that crowds were separated from potentially life-threatening run-ins with vehicles, Meridian’s mobile Archer 1200 barriers have created the “safe zones” to protect them. The Archer was the answer to the often asked question, “What is the best barrier for protecting crowds?”

Meridian’s steel barriers, while weighing over 700 lbs. but easily moved by one person with the right equipment, were also placed at the entrances to malls and busy shopping districts effectively blocking vehicles from getting into areas of unrest and staging smash and grab raids.

In La Mesa in Southern California, Meridian was called in after rioters tried to burn down La Mesa police headquarters. At the next planned protest Archer barriers and an Archer beam gate were placed at critical access points to the protest zone. “Meridian barriers were our solution,” said Captain Matt Nicholass from La Mesa Police Department. “They were quickly installed, very maneuverable, and provided the level of safety we were seeking.”

In Green Bay, Wisconsin during another demonstration more than a thousand protesters walked from a local park to Green Bay police headquarters. Police Chief Andrew Smith said, “These barriers will stop a car or a truck getting anywhere near the demonstration.”

In Los Angeles when protesters surrounded the famed shopping precinct The Grove, Archer barriers were quickly dropped to ensure no cars could get in carrying smash and grab thieves, as had happened nearby earlier that day. “We were fortunate, with the help of police and other emergency services, to pass through several road closures, to deliver two trailer loads of Archer 1200 barriers,” said Meridian CEO Peter Whitford.

Police in Martinez created a solid “no go zone” for vehicles when a big demonstration was planned for the Californian city. Mike Estanol from the Martinez Police Department said, “By having the Meridian barriers at every key entry point we were able to quickly and effectively close down vehicle traffic. I liked the barriers because people could move freely past them while still stopping cars and trucks.”

Meridian Rapid Defense Group stands ready to help again with its Archer 1200 Barriers. They are “SAFETY Act Certified” by the United States Department of Homeland Security (DHS) and that provides the ultimate standard in keeping people, communities and places safer. For more information about Meridian Rapid Defense Group and the Archer 1200 vehicle barrier visit www.meridian-barrier.com