By: Penny Stocks to Buy, Picks, News and Information | PennyStocks.com - Feed
What Penny Stocks Are Investors Watching in April 2021?

As another week of penny stock trading commences, which companies are investors watching? As of Monday, April 12th, the broader market is pulling back slightly. This comes only a few days after the S&P 500 and the Dow both hit record highs. So why the modest correction?

Before we get into the specifics, it’s important to note that corrections are a natural part of the market’s ebb and flow. This is true for both penny stocks and blue chips. Last week, record highs were seen across the board, with a focus on tech and communications. Now, investors await the start of earnings season, which will begin later this week.

Recently, economic data has been much stronger than anticipated. With vaccine distribution at an all-time high, investors are betting on a post-covid economic recovery. This could mean more discretionary spending and less fear regarding a new surge in cases.

“The initial reopening of the economy will trigger a huge rebound in margins across sectors which have been hit hardest by the Covid crisis. The unprecedented surge in households’ cash balances over the past year – mostly due to the enforced drop in spending on services, augmented by stimulus payments – represents a potential wave of demand, while supply is constrained by business failures, especially in the restaurant sector.”

Yes, there are fears of long term inflation in the market. However, the overwhelming sentiment seems to be hopeful regarding the future. If inflation can occur simultaneously with an economic recovery, the effects could be greatly diminished. In a discussion on Sunday, Jerome Powell noted that the fears are tangible that the economy could open too quickly. But, if careful steps are taken to avoid this, we could see mostly positive momentum moving forward. Considering this, let’s take a look at three top penny stocks to watch this week.

Obalon is a medical tech penny stock that we’ve covered numerous times. It is vertically integrated and claims to have the first and only FDA-approved swallowable, gas-filled intragastric balloon system. This system treats obesity by effectively shrinking the available area in the stomach. In addition to its Q4 and 2020 financial results reported last month, Obalon gave some exciting insights into its business.

After announcing a definitive merger agreement with ReShape Lifesciences Inc. on November 10th, Obalon has continued to be a trending penny stock to buy. To understand OBLN’s financial situation, let’s take a look at its Q4 and 2020 results.

During the fourth quarter, OBLN took in roughly $0.1 million in revenue. This is a decrease over 2019’s fourth quarter, but the company claims that this is due to a suspension of operations as a result of Covid. In the full 2020 report, OBLN brought in roughly $1.3 million in revenue. This may not seem like much, but we have to consider that its intragastric balloon system is not yet fully commercialized.

Moving back to the merger, Obalon will effectively trade under the ReShape Lifesciences name. The new ticker will be RSLS, but it’s important to consider that there is not yet a timeline for the merger to be completed. If we consider its long-term prospects, OBLN stock looks like it might be worth keeping an eye on. 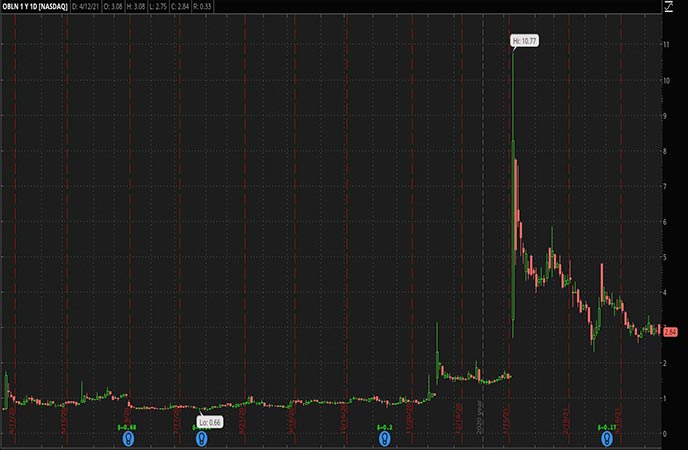 If you read pennystocks.com often, you’ve probably read about CTXR stock. For those who don’t know, it is a late-stage pharmaceutical company developing critical care products. This includes its flagship product known as Mino-Lok, which is in a Phase 3 program to see its efficacy as a novel antibiotic lock solution. This product will be used in treating those with catheter-related bloodstream infections or CRBSIs.

“We are eagerly awaiting the third interim efficacy analysis from our independent Drug Monitoring Committee regarding the Mino-Lok Phase 3 trial in progress. This pivotal trial is progressing according to plan, and we expect full enrollment this year. The antibiotic lock solution market is large and substantially underserved, with an estimated market opportunity of $750 million in the U.S. and over $1.5 billion worldwide.”

It is always exciting for investors when a biotech penny stock has a Phase 3 trial. This means that a compound is nearing the end of the study period. Because of this, it is one step closer to commercialization. While these things do take time, it is important to note the progress made along the way. Only a few days ago, Mr. Mazur announced that he had purchased a sizable $26.5 million worth of the company. When insiders buy shares, it helps to inspire confidence in both retail and institutional investors. But as usual, this should be taken with a grain of salt.

Because of the potential with Mino-Lok, Mazur states that “we are very confident that this will ultimately be approved by the Food and Drug Administration.” Out of the 7 million catheters administered every year, around 500,000 become infected. As we see, this is a large market opportunity for CTXR.

Also of note is that its subsidiary, Novecite, is working on several cellular therapy drugs. This includes those using mesenchymal stem cells, which it states could be in use to treat Covid-19. While these drugs are still in very early stages, Because of its potentially valuable pipeline, it might be worthwhile to take a look at Citius Pharmaceuticals. 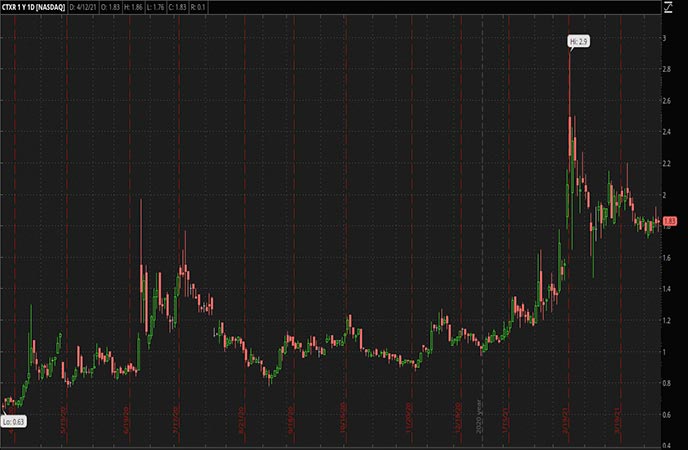 As of mid-April, Auris Medical Holding continues to be a trending penny stock to watch among many investors. Since the end of March, EARS stock has climbed by over 50%. Gains like these are not unheard of, but they are also not entirely common. Because of this, all eyes are on EARS stock right now.

For some context, Auris is a clinical-stage company developing therapeutics for use in everything from neurology to rhinology and CNS disorders. It has several pharmaceuticals in various stages of the FDA approval processes. This includes AM-125 for the treatment of Vertigo (Phase 2), AM-201 for the treatment of antipsychotic-infused weight gain (Phase 1), and more recently, AM-301 for the protection against airborne viruses and allergy.

While it has other compounds in its pipeline, right now the focus is on AM-301 for its potential in blocking Covid-19 infections. It’s also important to note that Auris will be providing a business update on its AM-301 development program, tomorrow Tuesday, April 13th at 8 AM ET. This comes only a week or so after it announced its business update for the second half and full year of 2020.

In this business update, CEO Thomas Meyer stated that “the 2020 business year has been quite transformative for our company as we initiated the development of AM-301, a nasal spray designated for self-protection against airborne viruses and allergens.”

Meyer went on to state that its highly dedicated team managed to reduce the viral titer of SARS-CoV-2 in the human nasal mucosa by more than 99%. This is extremely exciting, but we also cannot let speculation get the best of us. For this reason, it would be smart to keep EARS at top of mind as it progresses through the various trial stages moving forward. 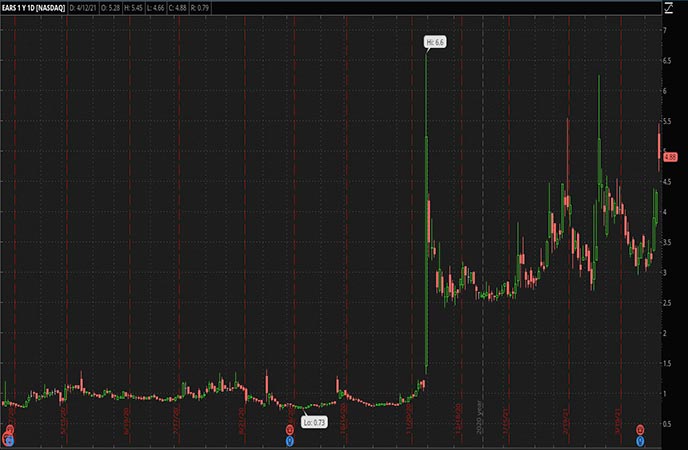