By: StockNews.com
Due to high demand and some disruptions from the coronavirus, the world is facing a supply crunch when it comes to semiconductors. Read more to find out which company will be a big beneficiary.

Micron Technology, Inc. (MU) is a designer and manufacturer of computer memory and storage products worldwide. The company operated through four segments: Compute and Networking, Mobile, Storage, and Embedded Business.

Micron Technology makes the tiny chips that make technology work. The company has been around since 1978. The headquarters are in Boise, Idaho. MU employs around 40,000 people. At $90.51 per share at the end of last week, MY had a market cap of over $100.47 billion. The stock trades an average of over 23 million shares each day. MU shares are heading for a new all-time high. The current environment for chipmakers could thrust the shares through the previous peak as a hot knife goes through butter.

A semiconductor shortage sets the stage for higher chip prices

Micron Technology ranks sixth and is one of the leading companies in the semiconductor industry. The company manufactures many different memory chips and semiconductors for a wide range of applications. The current chip shortage creates the potential for rising prices, putting manufacturers like MU in a position to earn more profits.

The global chip shortage is a result of the COVID-19 pandemic. To address the shortage, the US Congress authorized a series of programs and incentives for US-based chip manufacturers. President Biden signed an executive order to review the semiconductor supply chain to address the current shortage and prevent future supply shocks.

Semiconductors are crucial ingredients in computers, electronics, and cars. Supply and demand factors are pushing prices higher, and MU’s position in the sector means that stepping up production when prices are rising will directly impact on the company’s bottom line.

MU shares are closing in on the all-time high

At the end of last week, MU shares were a stone’s throw away from the all-time high. 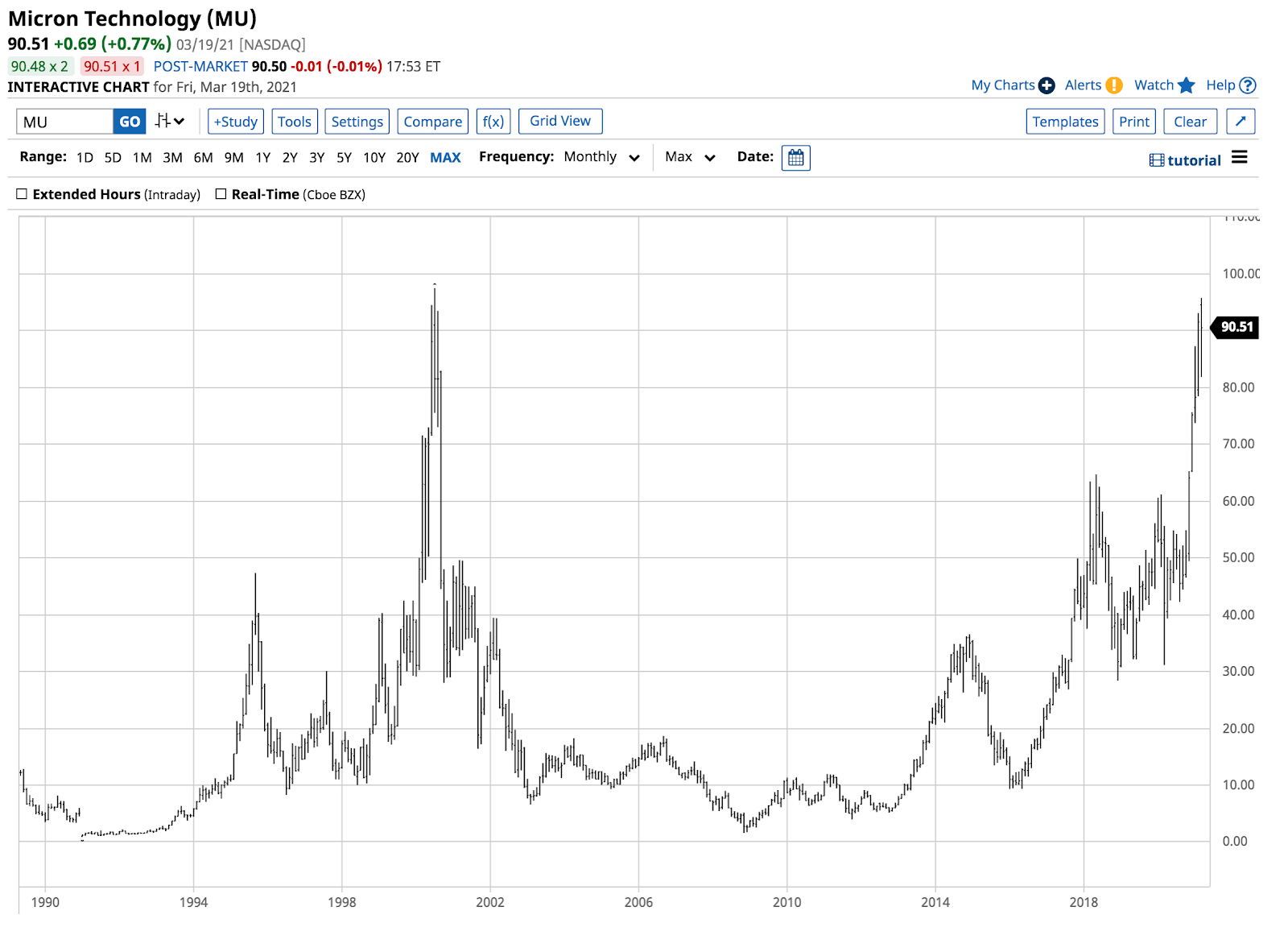 The chart shows that MU reached $97.50 per share over two decades ago in July 2020. At the $90.51 level at the end of last week, MU was closing in on that level after reaching $95.75 on March 1. In March 2020, as the global pandemic caused selling in markets across all asset classes, MU shares spiked to a low of $31.13. The stock has tripled over the past year as it approaches a new record peak.

Since 2018, the trend in revenues and earnings at MU has not been bearish. 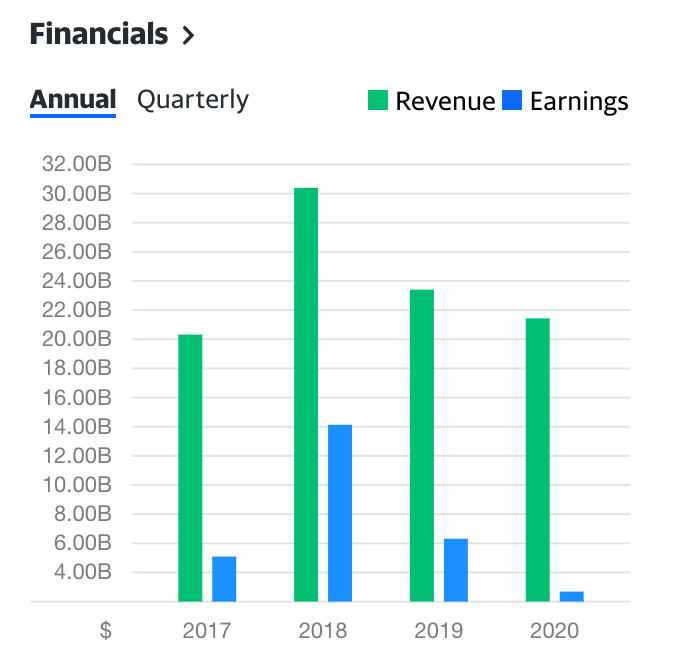 The chart shows the steady erosion of revenues and earnings at MU from 2018 through 2020.

Beating earnings estimates- The next test comes on March 31

While revenues and earnings have been moving lower, MU continues to beat the street each time the company reports its quarterly results. 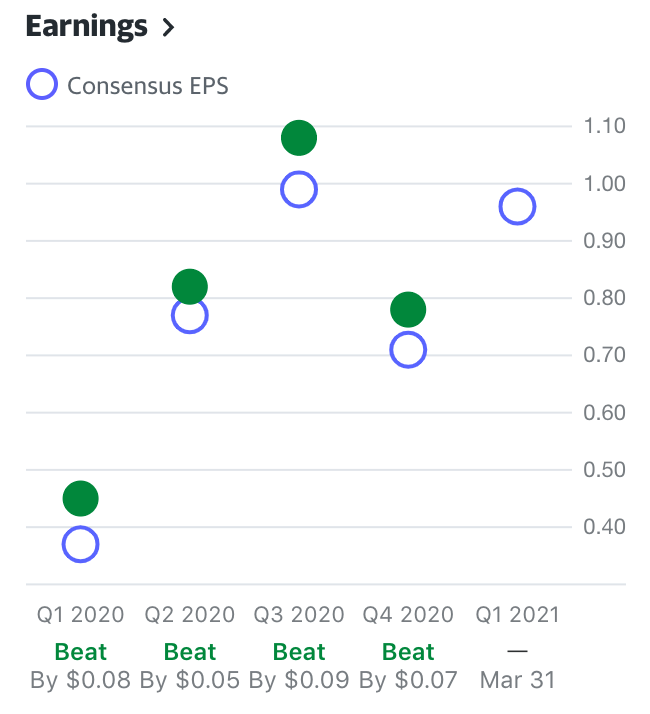 The chart shows that over the past four consecutive quarters, MU has beat consensus analyst EPS estimates. In Q4, the company reported 78 cents, which was seven cents above the average consensus forecast. MU will release its next earnings for the first fiscal quarter of 2021 on March 31. The current forecast calls for EPS of 94 cents. However, most analysts appear to believe the earnings will be much higher as MU sells its chips into a market shortage.

Analysts love MU and are looking for a higher share price

Most analysts are bullish for the company that is likely to benefit from the semiconductor shortage. 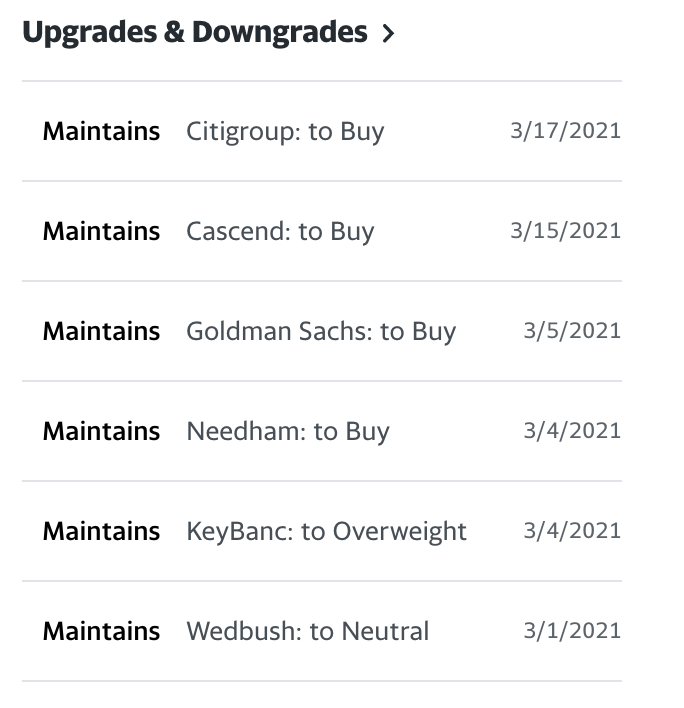 The chart shows that five of six companies on Yahoo Finance rate MU shares a buy or overweight. Only Wedbush has a neutral rating on the stock as it moves towards a new all-time high.

A survey of thirty-one analysts on the site has an average target of $108.90 for MU shares, with estimates in a wide range from $39 to $150 per share. Those looking to take advantage of the semiconductor chip shortage should consider Micron Technology. The company is a leading chipmaker, the stock’s trend is higher, and a technical break above the $97.50 record high from 2020 could lead to a flood of buying. Everyone loves a bull market. A chip shortage is a compelling fundamental reason why earnings should continue to rise. When technical and fundamental factors line up, the impact could be explosive. MU could gravitate towards the high end of its expected price target range, which is up at $150 per share. 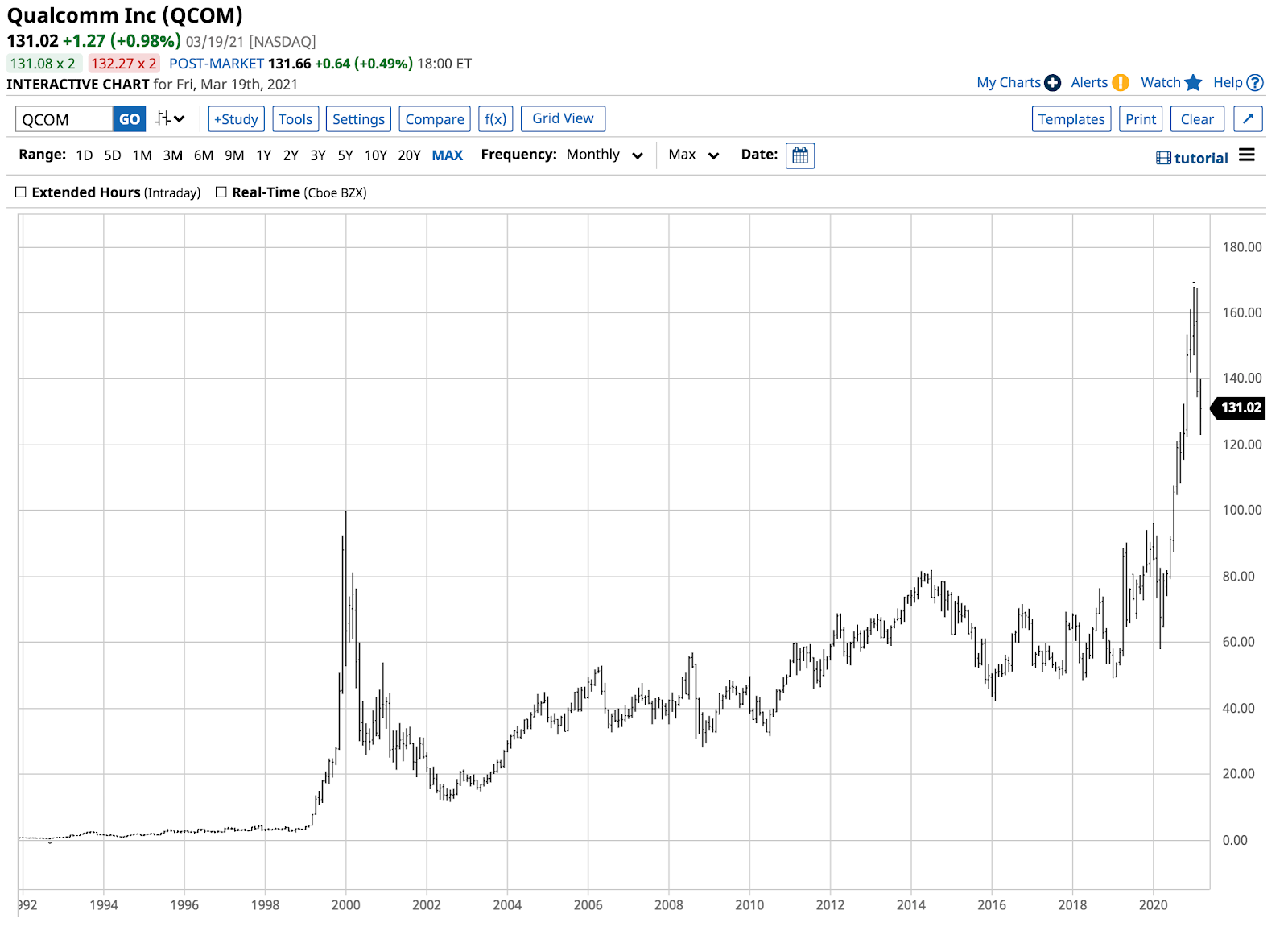 QCOM shares already hit record highs and have been pulling back since trading to $167.94 in January 2021. Taiwan Semiconductor (TSM) is the third-leading semiconductor maker. TSM shares have already exploded and traded at an all-time high of $142.19 in February 2021. South Korean Samsung is the world’s second-leading chipmaker, while Intel (INTC) is number one. 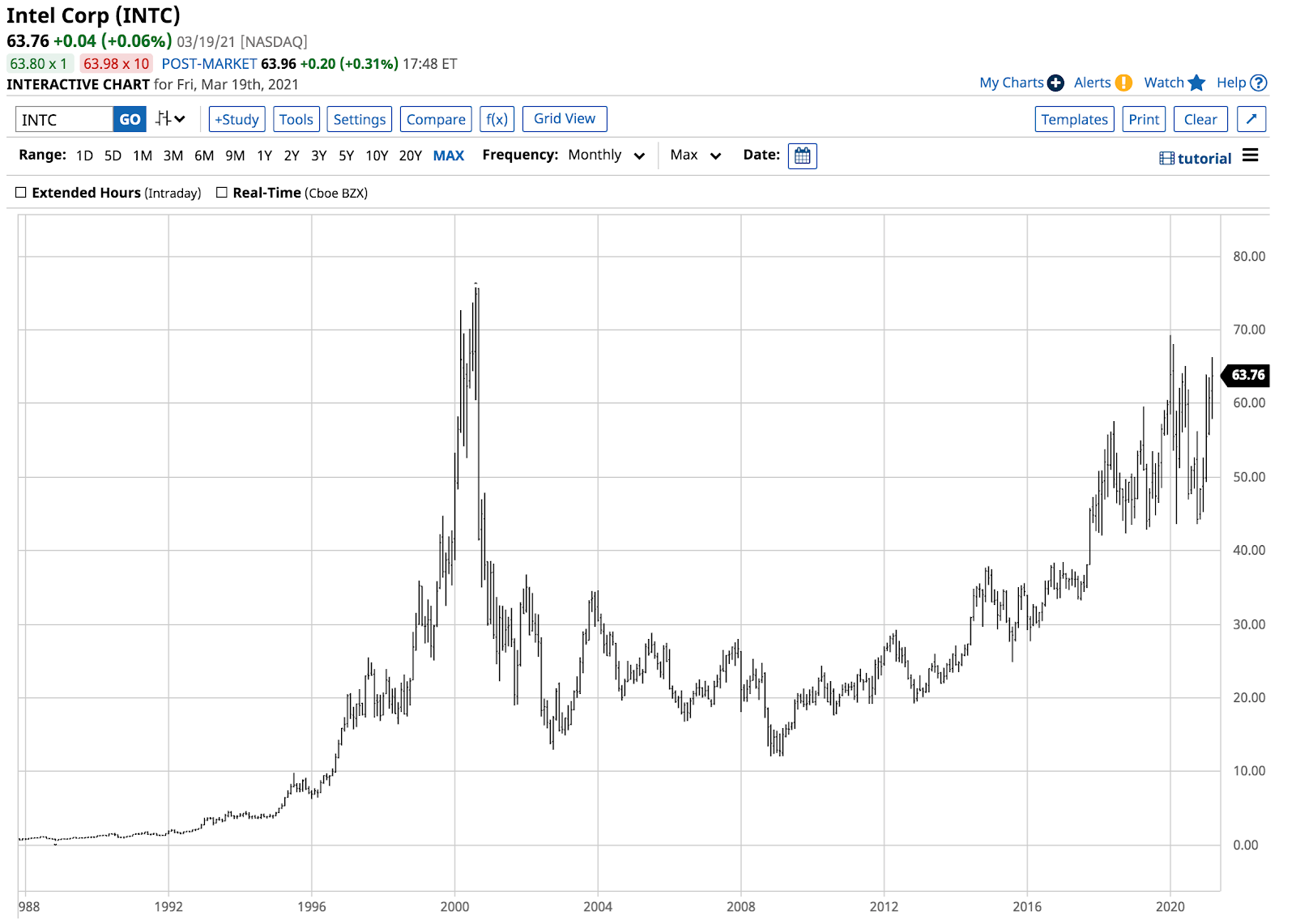 I prefer MU to INTC as Intel’s market cap is at nearly $259 billion. While INTC pays shareholders a $1.39 or 2.18% dividend, the company has 110,600 employees compared to 40,000 at MU. INTC’s market cap at almost $259 billion is more than two and one-half times MU’s. As INTC is a far larger company, it will be harder to drive earnings to the bottom line than at MU.

The chip shortage will likely drive all semiconductor stocks higher over the coming weeks and months. I favor MU because of the company’s size and US government support for the industry. MU shares appear to have room to run higher.

How to Ride the NEW Stock Bubble?

About the Author: Andrew Hecht

Andy spent nearly 35 years on Wall Street and is a sought-after commodity and futures trader, an options expert and analyst. In addition to working with StockNews, he is a top ranked author on Seeking Alpha. Learn more about Andy’s background, along with links to his most recent articles.