5 Tech Penny Stocks To Buy For Under $4 Right Now, Are They Worth It?

As markets continued to recover on March 22nd, many tech penny stocks outperformed overall. There are a few reasons why this is the case. Broadly, the tech industry and corresponding stocks have seen a great deal of bullish interest due to the pandemic. With more people at home, many are using tech products and or services.

On Monday, we saw Treasury yields for the benchmark 10-year yield sit at below 1.7%. This is a large improvement over last week’s numbers, which were the highest since January of last year. Investors seem to be concerned with the future of the economy & the potential for inflation.

What will happen with inflation as trillions in stimulus are given out? When will the economy recover to its pre-covid levels? These questions seem to be in play right now not matter if we’re talking about blue chips or penny stocks. But, we continue to see positive days where investors show they are confident in the future, which is exemplified in the surge of growth stocks over value as we saw on Monday.

Tech Penny Stocks to Buy Under $4

Now could be the time to focus on the bullish sentiment we’re seeing. With this in mind, here are 5 tech penny stocks that can be bought for under $4. But just because they’re cheap, does that mean they’re worth the risk? I’ll let you decide.

Boxlight Corp. is a penny stock that we’ve covered multiple times in the past few months. The company plans to release its fourth quarter and full year financial results on March 25th. Ahead of this, let’s take a closer look at BOXL stock.

Since December of last year, shares of BOXL stock are up by over 90%. This bullish rally follows a similar trajectory of the tech market as a whole. Boxlight produces a large range of tech products for use in both educational and industrial settings. But, its focus has remained heavily on the former for some time.

Its flagship products include the Clevertouch and Mimio systems. These are interactive devices that can be used in both business or educational applications. In addition to producing physical products, Boxlight also develops software for its products and uses it in collaboration efforts.

In the past few months, Boxlight has built its market across many educational institutions worldwide. This includes announcing that it would be supplying a large range of systems to the British Academy in London, U.K. It recently announced the Clevertouch gallery in London, where potential customers can see exactly how these products work.

Mark Starkey, President of Boxlight, states that “these new brand investments we’re launching throughout 2021 is all part of our ambitious growth plans to become the go-to brand for Enterprise, Education, Healthcare, Retail, and Government technology.”

The company’s launch of the Clevertouch Academy is also helping with the adoption of this technology. So with all of this in mind, is BOXL stock worth watching? 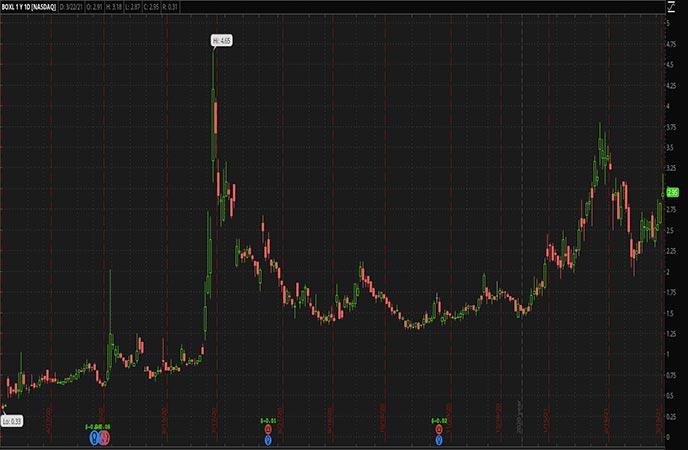 9F is a digital financial account platform out of China. It has several products, including online lending, wealth management, loan products, and traffic referral services. As a Fintech company, 9F has benefitted from China’s economic growth over the past few years.

Additionally, it works on various new platforms, including Wukong Licai, 9F Wallet, and 9F Puhui, among others. These offer consumers the ability to do everything from credit card payment to debt consolidation and more. Its products are offered to a large range of Southeast Asian countries. In this way, it has been able to broaden its market substantially. One of the more interesting aspects of the company is its entrance into the blockchain arena.

Last year, the company launched what is known as the “Superbrain” platform. This platform encompasses AI, cloud, and blockchain tech to provide payments for both financial institutions and merchant partners alike. While crypto is not its main business, it has become a part in the past few months. This has also helped it gain a great deal of traction in the stock market overall. Since September of last year, shares of JFU shares are up by over 130%. With this solid gain in mind, it could be a company to watch. 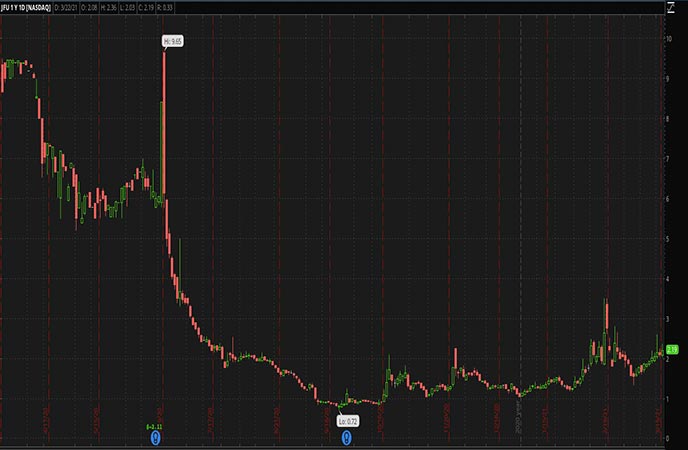 As a tech company, CSCW stock rose alongside other tech penny stocks on March 22nd. Primarily it is an education and entertainment company. It provides online and offline music education to a variety of customers.

Color Star CEO Mr. Luke Lu stated, “our Company has recently increased its development efforts in artificial intelligence, AR vision, and blockchain applications. We will not hesitate to invest in the development and testing of technologies in order to bring a brand-new experience to the future of internet entertainment.”

In addition to this, Color Star announced earlier in March that it had entered into a strategic partnership with Zhongguang Telecom Ltd. to work on intelligent internet marketing. This marketing strategy is new to both companies but could be a valuable asset. As a tech company with many interesting developments in the works, CSCW stock could be worth watching. 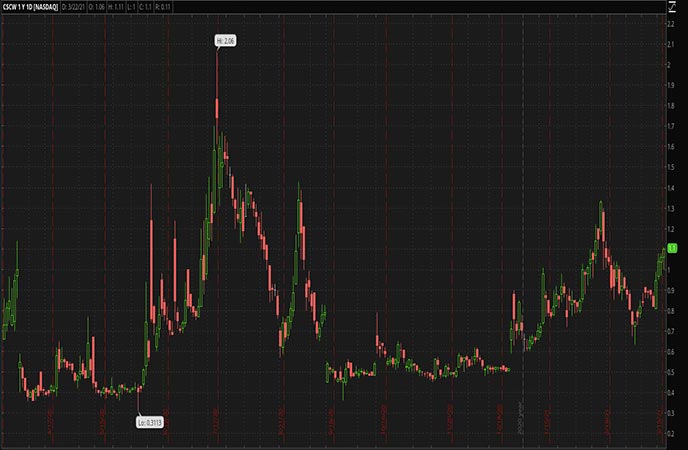 Ion Geophysical may not be a penny stock you’ve heard of, but it is an innovative tech company worth watching. The company is a data company providing information helpful in decision-making for offshore energy and maritime customers. On March 22nd, Ion announced the extension of its Gemini extended frequency source in its original Middle East deployment location. This extension will double the original duration and area of the program. While this may not seem like a big deal at first, it serves to validate the technology and how much of an asset it is to the company.

Chris Usher, President of Ion, stated that “we are delighted with our new offering’s robust performance on this survey, which demonstrated low technical downtime and achieved tight specifications for sailing speeds. The survey extension is now expected to wrap up in late May. In response to strong industry demand, we plan to increase Gemini capacity four-fold for programs this summer.”

After completing a $10.5 million registered direct offering last month, Ion looks well-capitalized to expand on this most recent project. When they announced this offering, Usher stated that “we still plan to execute the upcoming bond restructuring transactions and associated rights offering, pending shareholder approval, in early April.”

With any tech company, funding is essential. While it does have contracts in the works, it needs capital to embark on these large plans. So with ample capitalization in mind, is IO a penny stock to watch? 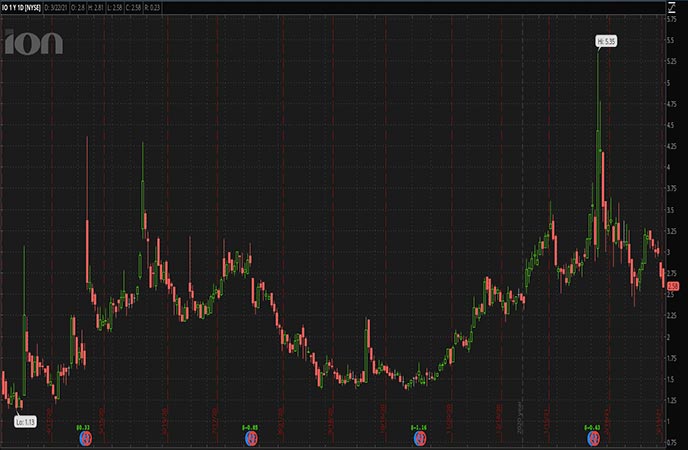 Another entertainment company of note is GigaMedia Ltd., which provides digital entertainment services to several highly-populated areas of Asia. In the past few years, it has worked to capitalize upon the Asian entertainment market. It does this through the distribution of original content, as well as mobile & casual games. It has also managed to move into both Southeast Asia and Europe.

Its mobile gaming market has grown substantially over the course of the pandemic. This portfolio offers both non-cash gambling or casino games, as well as card and table games. It has several product lines, including MahJong, AkaSeka, and Yume 100. During the pandemic, the demand for online gaming has shot up substantially. This makes sense given that there are more people at home than in many years prior.

While not much news comes out from GIGM, we can use its latest financial report to understand where the company stands. During the third quarter of last year, GigaMedia brought in revenue of $2.03 million with a gross profit and operating loss of $1.2 million and $0.36 million, respectively. CEO James Huang stated that during the quarter, “it became clear that our efforts accumulated in past quarters are gradually paying off, and our improvement in profitability is gaining pace.”

GigaMedia also entered and executed an agreement to acquire $10 million worth of promissory notes of Aeolus Robotics Corp. With this, it has access to AI-enabled service robots. Are these developments enough to justify the move that it has made recently? 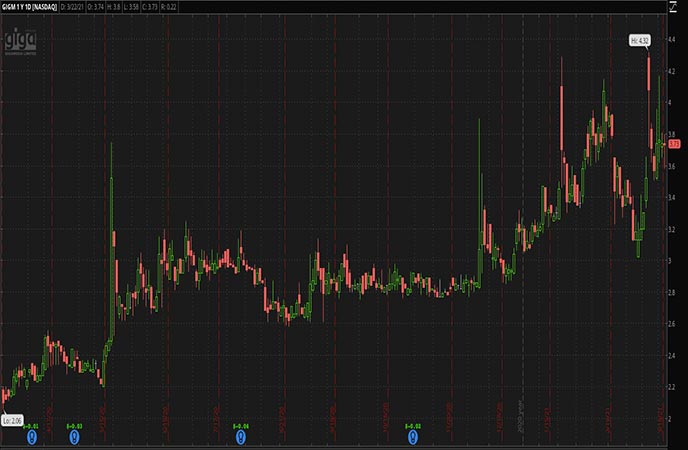