Top Penny Stocks Under $3 To Watch This Week

By: Penny Stocks to Buy, Picks, News and Information | PennyStocks.com - Feed
Will These 4 Penny Stocks Keep Up Their Bullishness This Week?

Penny stocks have been on a bullish journey this month. While there have been days where the market is down, investors are showing a lot of upbeat sentiment toward the future. In March, the path of Covid has changed dramatically. While it was thought that vaccine distribution would take months, millions of doses are being given out in the U.S. every day.

With more than 25% of the U.S. population having received their first dose, case numbers are lower than they have been in many months. What this means for the market is that there is a lot of confidence regarding an economic upturn.

Before Covid, the economy was headed toward reaching new record highs. And even during the pandemic, we’ve seen the Dow and NASDAQ hit fresh intraday records. But, this has also been sprinkled with fear regarding long-term inflation and the potential of a third wave of Covid cases.

Now that it appears things are getting back under control, trading is commencing with more confidence than in the past year. While tech is in focus, other sectors such as biotech, mining, and energy are also in the public eye. With factors such as stimulus, a green energy revolution, and more at hand, there are many potential catalysts that the future could hold. Let’s take a look at some penny stocks to watch in light of the market’s recent turnaround.

TNXP is a biotech penny stock that we’ve been discussing for many months now. Early on March 15th, shares of TNXP rallied heavily on the news released before trading commenced. The news struck of Tonix achieving a 50% enrollment in its RALLY Phase 3 study of TNX-102 SL for fibromyalgia.

CEO Seth Lederman stated that “we believe that achieving this milestone keeps us on plan for the anticipated release of interim results from RALLY in the third quarter and toppling data in the fourth quarter of this year. If the toppling results are positive, we expect to be in a position to submit a New Drug Application for TNX-102 SL for fibromyalgia to the U.S. Food and Drug Administration in 2022.”

In addition to this, Tonix announced a few days ago that it is working on a Covid-19 diagnostic skin test. This test, known as TNX-2100, produces a reaction when it identifies Covid-19 on the skin. It is modeled after a traditional tuberculosis skin test, known as Tubersol. The company states that it expects to submit an IND during the second quarter of this year.

Because it has so many compounds and products in the works, Tonix represents a more broad biotech company for investors to look at. While it will take some time before these treatments and tests are approved (if at all), most investors tend to invest in the potential of a pipeline. Would this make TNXP a penny stock to watch right now? 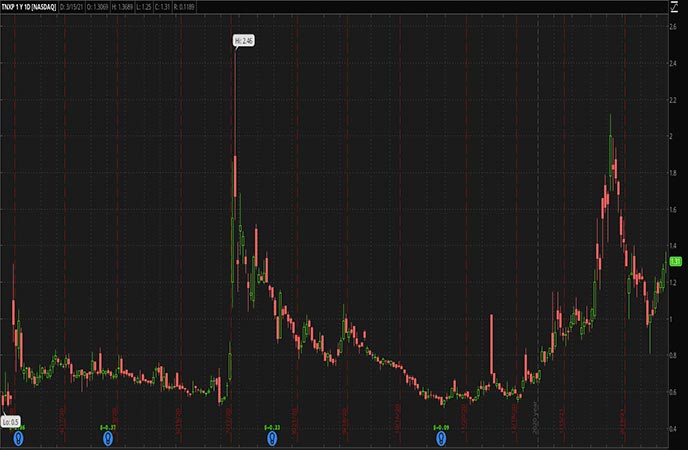 InspireMD is another biotech company, but one that is utilizing its proprietary technology to treat carotid stenting. It uses its MicroNet Technology to redefine the industry on providing stents for the prevention of strokes and long-term benefits. Only a few days ago, the company released its fourth-quarter and year-end results. In the results, the company announced the closing of a public offering of $20.7 million.

CEO Marvin Slosman stated that “it was a very remarkable, albeit challenging year for us – and the global community — and we achieved many important milestones toward our goal of changing the standard of care for the prevention of stroke caused by carotid artery disease. Our team’s performance during the Covid-19 pandemic has remained steadfast, focused on execution, financial stability, and commercial growth. This included maintaining our global presence with CGuard during this most challenging time.”

During the year, InspireMD announced the approval of its Investigational Device Exemption application to initiate a pivotal study of Guard EPS in the United States by the FDA. Additionally, the company worked to secure a large foothold in Brazil, one of the largest markets for medical devices in South America. This could prove beneficial to the company in the long run if all goes according to plan.

Currently, InspireMD is applying for various regulatory approvals in other markets such as France, Korea, Taiwan, and more. As you can see, the company is trying to broaden its market as much as possible. How this plays out remains to be seen. But in the short term, NSPR could be worth watching. 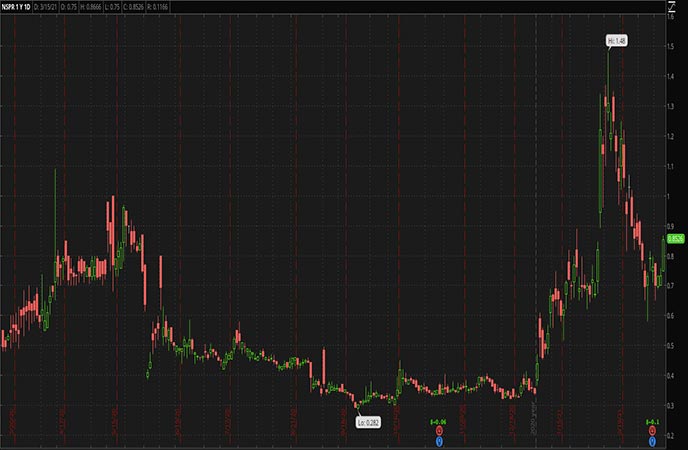 A few weeks ago, shares of TYME rallied after the announcement of the closing of a 40 million common share public offering. With this, the company raised roughly $100 million to help with the advancement of its clinical programs. This includes TYME-19, which could be a potential therapy for Covid-19, cancer, and other viruses.

The company was recently granted a U.S. patent claim for TYME-19 for the treatment of Covid-19. Normally, Tyme Technologies is a producer of cancer metabolism-based therapies or CMBTs. With Richie Cunningham taking the spot as CEO a few months ago, the company is working on broadening its direction.

At the end of last year, Tyme reported having roughly $13.5 million in cash on hand. Also, it reported positive data from a study for TYME-88 for gastrointestinal cancers. Right now, it seems as though investors are focusing on the potential of TYME-19. This oral synthetic bile acid is typically in use as an anti-cancer treatment. But, the company showed in early studies that it has efficacy in treating Covid-19.

Obviously, it will take several months before studies move further and the approval stages are complete. Early studies show that TYME-19 could prevent viral replication with little to no cytotoxicity in the body. With vaccine stocks in the spotlight, TYME could be one to watch additional candidates are sought. 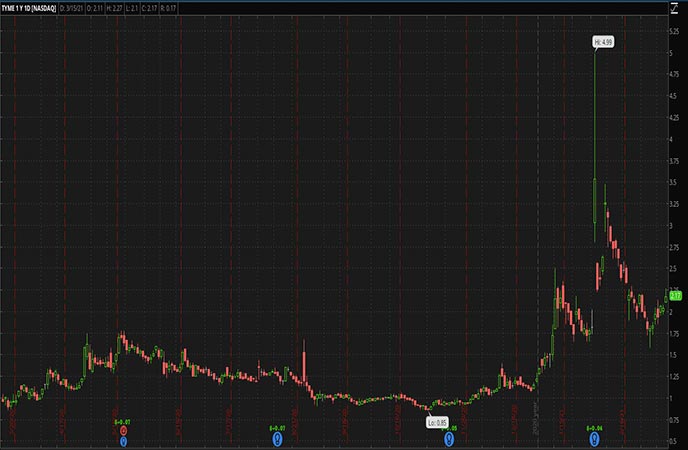 If you read pennystocks.com regularly, you probably have heard of Biolase Inc. BIOL stock has been making some large waves in the past few months. Biolase produces a broad range of lasers used in a variety of dental applications. This includes over 270 patented and 40 patent-pending technologies.

With these, it has sold to more than 41,200 laser systems across 80 countries around the world. This makes it one of the leaders in this area of the biotech industry. Its main products are the Waterlase and Waterlase Plus, which are used in many common dental procedures. In the past few years, Biolase has worked to increase the adoption of this technology.

This includes the recent creation of the Waterlase Perio Academy, which aims to teach clinicians how to utilize its laser systems. CEO John Beaver states that “launching an academy devoted to supporting the growth and timely needs of periodontists directly aligns with Biolase’s mission of advancing dentistry. Periodontists are actively seeking ways to manage both periodontal and implant diseases, as the incidence of gum disease with “bone loss” has increased in the adult population.”

Also, the company states that this can often be linked to Covid-19-related infections and cardiac disease. With dental procedures moving quickly toward pre-covid levels, Biolase could be one f the penny stocks to watch right now. 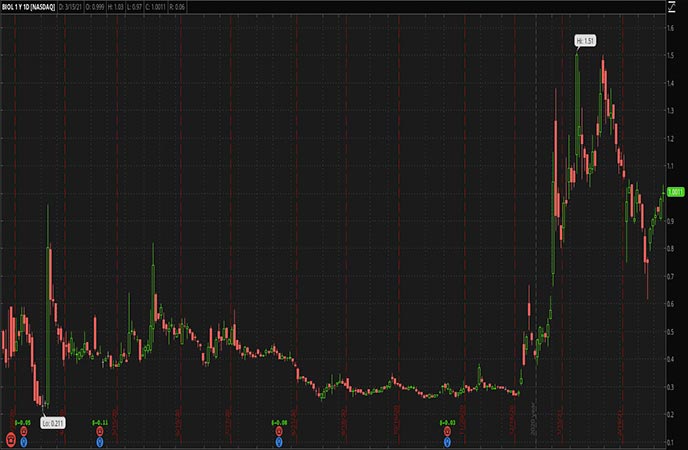 Are Penny Stocks Worth The Risk?

There’s no guarantee that trading penny stocks will make you an overnight millionaire. Nor are there any rules that say just because you bought cheap shares, you automatically score big. But if you’ve got a sound grasp of the market and a basic understanding of how to day trade, then you’re one step closer to answering this question. It all depends on your personal appetite for risk. Penny stocks are known for their volatility so make sure you’ve got this in mind if you’re looking to get into this wild world of cheap stocks.