Best Penny Stocks To Buy? Here’s What Analysts Think Of These 4

By: Penny Stocks to Buy, Picks, News and Information | PennyStocks.com - Feed
Are These Penny Stocks To Buy According To Analysts?

We saw another round of bullish sentiment on Wednesday, and investors continue to search for the best penny stocks to watch. The looming issue amongst both blue chip and penny stocks has been the long-term effects of inflation. Given the $1.9 trillion stimulus package, investors feel that the impact in the next few years could be detrimental to the market. Additionally, with interest rates at near-zero, what happens when it comes time to pay back all these loans? Now while these fears are completely justified, they may not be as bad as we thought.

The $1.9 trillion stimulus passed the House and is on its way to the President. This has sparked more bullishness in the market, calming some nerves. This is seen across both blue-chip stocks and penny stocks. While we don’t know how long this bullishness will last, it is a positive in the short term. With this in mind, let’s look at four popular companies among retail traders. Are they the best penny stocks to buy, or should you avoid them entirely? Here’s what analysts think

One of the companies we’ve been covering for a while is Evofem Biosciences. Evofem produces women’s health products that include protection from STIs and other unmet needs in this area. The company has grown substantially over the past few years. This has led to heightened interest in EVFM stock.

Interestingly enough, on March 9th, the CEO of Evofem purchased over 45,000 shares for a total price of $103,000. While this isn’t a groundbreaking announcement, it does show a deeper sentiment worth considering. When a CEO or insider buys shares in a company, it often shows a great deal of confidence in that business’s future. Because in this case, it is the CEO, it could mean that there are components of Evofem to be bullish about right now.

In other news, the company launched the first non-hormonal birth control option for women that has been seen in decades. Known as Phexxi, this product could be a game-changer in the women’s health industry. Current birth control methods usually come with a slew of side effects due to the hormones within them.

By producing a non-hormonal version, Phexxi is a gel-like substance that can be as effective, if not more, than currently existing birth control options. While the approval process may take some time to complete, Evofem looks to be hard at building its share of the women’s health market.

As far as recent analyst ratings, H.C. Wainwright weighed in this month. The firm has a Buy on Evofem along with a $7 price target. 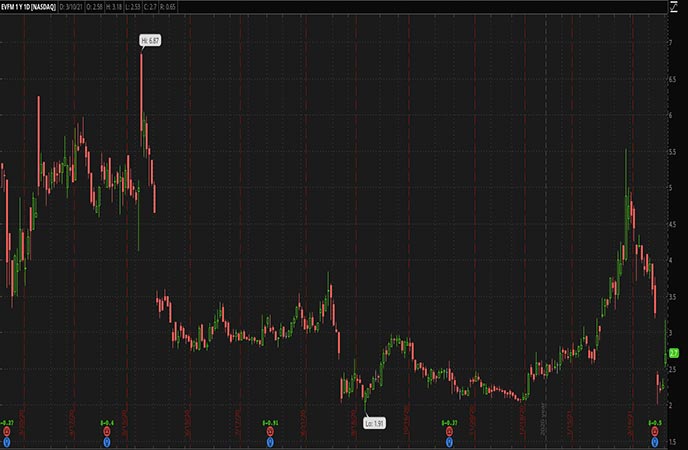 Transocean Ltd. is another penny stock that has frequently been on our radar in the past few months. Recently, it posted its Q4 2020 results. While revenue came in at a solid $690 million, this missed estimates by around $17 million. This is understandable, however, considering the effects of the pandemic. However, its adjusted net loss of $0.34 per share was not ideal for investors.

Given that energy consumption has affected RIG in the past, many believe demand will go up in the future. Despite this loss, Transocean still holds roughly $1.15 billion in cash and cash equivalents. And in 2021, the company reports that it has adjusted contract drilling revenues totaling $2.7 billion. While Transocean is an energy company, it works more in the ancillary energy market, providing offshore drilling contract services for oil and gas wells.

At the end of last month, the company reported having a fleet of 37 mobile offshore drilling units, including 27 ultra-deepwater units. Since December of last year, shares of RIG have jumped up by over 120%. And since November, that number jumps to over 500%.

One thing to consider is that the U.S. and the rest of the world could be moving toward renewable energy in the long term. While this may not affect RIG in the foreseeable future, it is definitely something to keep in mind. Also, as far as analysts are concerned, Barclays is the most recent to give its input on the company. Even in light of the large move in shares, the firm recently downgraded its rating to Underweight from Equal Weight. However, it boosted its price target from $1 to $2. 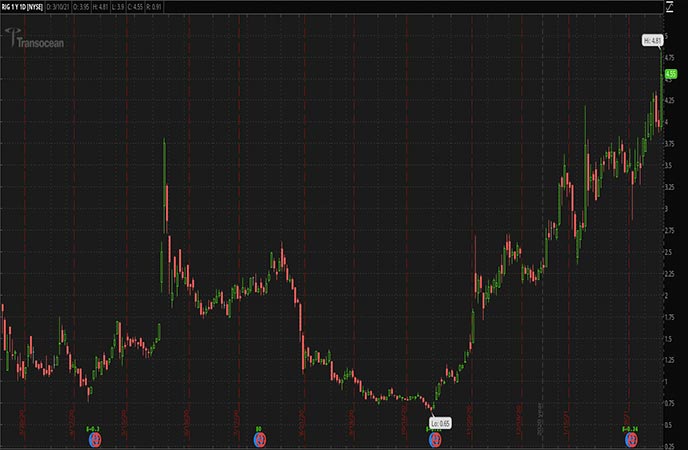 Ahead of its upcoming fourth-quarter results on March 15th, let’s take a look at AcelRx Pharmaceuticals. The company is a producer of specialty and novel therapeutics that can treat pain management for anesthetic purposes. This includes its non-invasive sufentanil product, as well as its approved DSUVIA compound. The latter is used in the control of pain management as an alternative to opioids.

Given that the opioid crisis is a major epidemic, the need for alternatives is more than palpable. In addition to its U.S. market, AcelRx has approved products for use in Europe. This has helped to broaden its market reach to the global sphere. A few weeks ago, the company announced a new study of DSUVIA for those undergoing plastic surgery.

Dr. Hisham Seify, the lead investigator on the study, states that “we are very interested in analyzing data from patients that were administered DSUVIA across all types of plastic surgery procedures. We have used DSUVIA for over a year in a wide variety of cases, and there are no currently published studies focusing on plastic surgery with this sublingual analgesic.”

This is important because, with more indications for a compound, the potential for higher revenue becomes prominent. While this is just an initial study, DSUVIA already has a lot of research to support its efficacy. Dr. Seify goes on to state that “plastic surgery has been one of the fastest-growing specialties where DSUVIA is being used.”

Where do analysts stand on ACRX stock? The last to weigh in was Credit Suisse Group. The firm has AcelRx at Underperform. It also carries an $0.84 price target, which ACRX has far-surpassed. 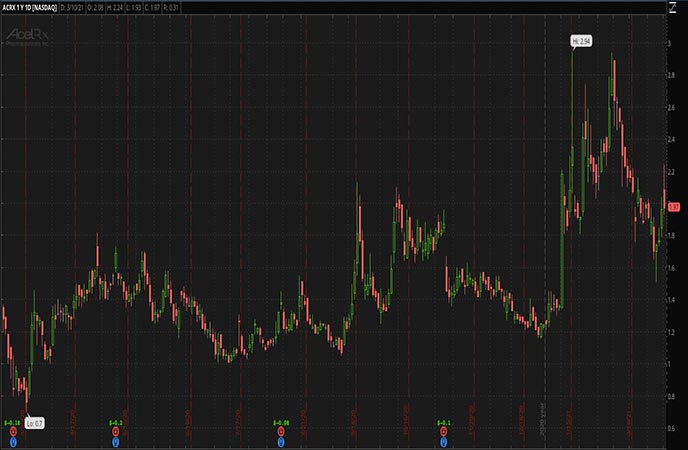 In the results, SENS posted a quarterly loss of $0.12 per share. This is much better than the $0.18 in EPS losses it posted in the same period last year. Additionally, the company posted revenue of roughly $4 million, which beat Zach’s estimate by almost 13%. One of the cases for bullish interest in SENS comes with its glucose monitoring system.

Given that diabetes affects so many worldwide, the company aims to commercialize its implantable glucose monitoring system or CGM. These systems are known as the Eversense and Eversense XL products, which are sensors inserted under the skin. These sensors can provide a continuous feed to users via smartphones or other devices. Concerning its fourth-quarter results, CEO Tim Goodnow stated that “we are very pleased with our fourth-quarter results, our commercial collaboration agreement with Ascension, and the success of our recent financings. These steps conclude a strategically transformational year for Senseonics.”

Its partnership with Ascensia Diabetes Care should help to commercialize its products in Europe. For some context, Ascensia is a distributor of diabetes products, including its CONTOUR product portfolio. With its operations spanning 125 countries around the world, this partnership could prove beneficial for the two.

The majority of recent analyst ratings are bullish on the stock. Of the 3 given this month, Raymond James was the only one to give a bearish outlook with its Underperform rating. Both SVB Leerink & Stifel Nicolaus have Buy or equivalent ratings and carry targets ranging from $2.50 to $3. 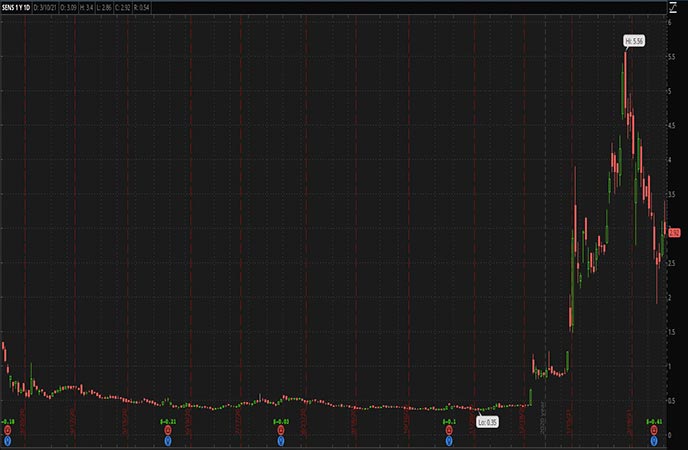