Making A List Of Penny Stocks To Buy? 3 Turning Heads In March 2021

By: Penny Stocks to Buy, Picks, News and Information | PennyStocks.com - Feed
Can These 3 Penny Stocks Benefit From A Market Rally?

As we enter another week of March, penny stocks are still showing their potential. One of the major factors impacting the market right now and in the past year has been Covid. Most recent data showed cases were at some of the lowest since the pandemic began in the past week or so.

This is a major positive piece of news and shows that the world could be heading back to normalcy. As it pertains to the stock market, investors have been extremely fearful about the future. But, with this data coming into play, it looks like investors could begin to feel more confident about the next year or so. Also, the $1.9 trillion stimulus package is in the pipeline of what’s to come as of this past weekend.

While it does need a few more approvals, analysts are stating that Biden could sign it by the end of this week. Also, the overall emotions of investors tend to play into how the market moves. When any positive news is announced, it’s an opportunity for investors to find penny stocks to buy. With this in mind, can these 3 stocks benefit from a market rally?

Ocean Power Technologies is a penny stock that we’ve written about numerous times. It is a provider of clean energy solutions, including those used in remote offshore and subsea applications. Its PowerBuoy platform also allows for the transmission of real-time data for a variety of uses. This includes oil and gas, defense and security, and communications, among others.

As a clean energy company, investors believe that OPTT could have potential in the long term. Because President Biden has pledged to bring the U.S. toward renewable dependency by 2050, investors are searching for clean energy penny stocks to watch. Only a few days ago, OPTT announced its Q3 2021 fiscal results. During the quarter, Ocean Power acquired 3Dent Technology, providing design and engineering services for its existing customers. 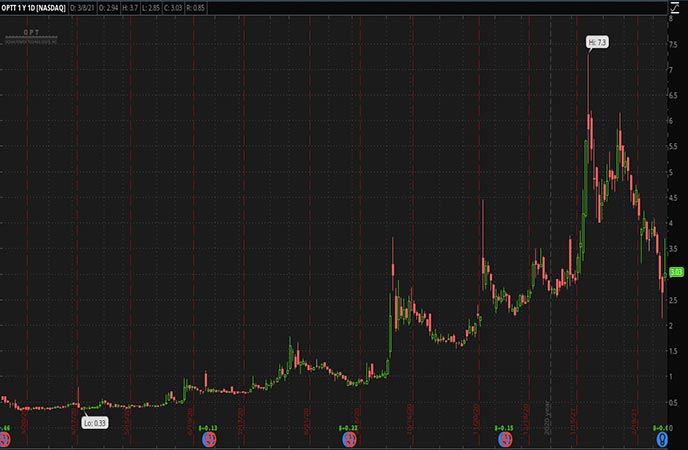 Also, it planned the first remote deployment of its OPT PowerBuoy system. CEO of Ocean Power, George Kirby, stated that “OPT’s third-quarter brought dramatic change to our company. We acquired 3Dent Technology, which we believe is an important step for our long-term growth strategy and for expanding our offerings of autonomous clean ocean energy and data solutions.”

In the announcement, OPTT showed that it brought in more than $76 million during the fiscal year, bringing its cash balance to north of $79 million. While revenue remained mostly stagnant at $0.3 million, the company is focused on cementing and globalizing its technology right now.

Another penny stock that we frequently discuss is Castor Maritime Inc. for some context, CTRM is a shipper of dry bulk goods. It owns a large fleet of shipping vessels to ship everything from wheat and corn to coal and iron. On Friday, the Baltic Exchange Dry Index (BDI), which tracks the rates that shippers like CTRM receive, hit a surge of 1,829. This represents an almost 40% gain from where it was a month ago.

This is important because the BDI essentially shows how much revenue a shipping company can get at a certain time. While other shippers like Star Bulk Carriers did not react as highly to this price increase, CTRM tends to have more speculative investors than others. This means that its share price may move in correlation with market events on a higher level than similar penny stocks. Now, this also means that CTRM tends to be more volatile than other shipping companies. 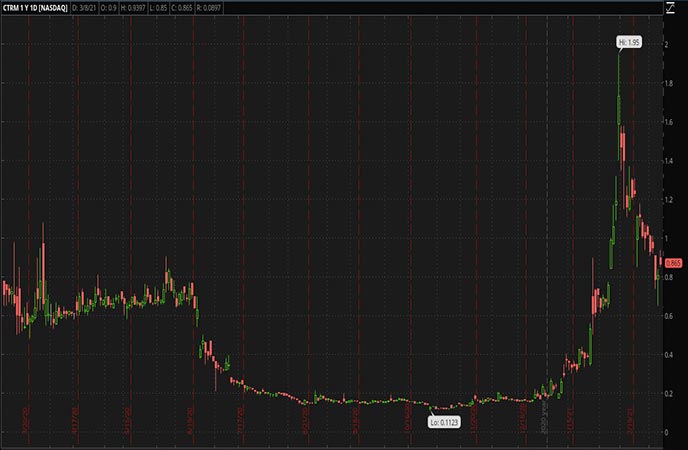 An additional factor that plays into this is the demand for certain dry bulk goods. CTRM ships cargo such as sugar, scrap metals, and the ones mentioned above. But, each one of these products has different market demand. A few weeks ago, Castor Maritime acquired a 2010 Kamsarmax dry bulk carrier for roughly $14.8 million. With this, it is working on expanding its fleet before demand picks back up. While CTRM was affected by the pandemic, it looks like the market may be returning to normal slowly. This means that with its advantageous vessel acquisition, Castor could be positioning itself in the right place at the right time. While it may be some tie before shipping hits pre-covid demand levels, CTRM could be a penny stock to watch.

As far as biotech penny stocks go, Biolase continues to be an interesting choice. Biolase produces a large range of laser systems for use in the dental and general medicine industries. Its primary focus remains to provide laser technology for use in various dental procedures. Biolase’s proprietary laser products have more than 271 patented and 40 patent-pending technologies. These allow it to be superior to almost any other dental laser system on the market.

To date, Biolase has sold more than 41,200 laser systems across 80 countries around the world. Because it is a rather specific company, Biolase does not have to deal with the same competition as other biotech penny stocks. A few days ago, Biolase announced the launch of its new Waterlase Perio Academy. The goal is to aid in adopting its laser tech by providing information and education to dentists. 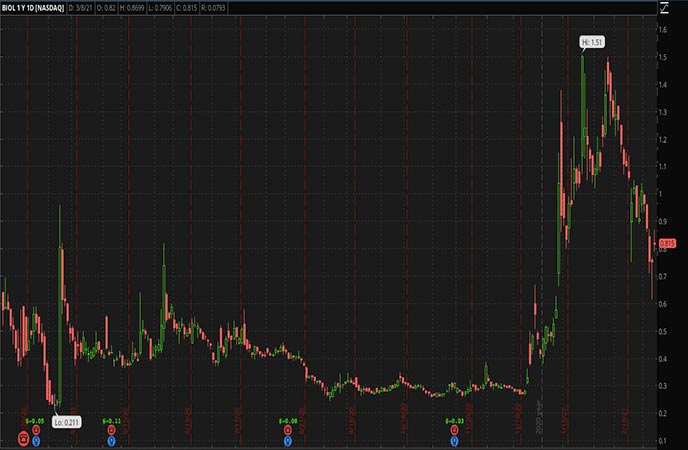 John Beaver, CEO of Biolase stated that “launching an academy devoted to supporting the growth and timely needs of periodontists directly aligns with Biolase’s mission of advancing dentistry.” Additionally, the company recently closed on a $14.4 million bought offering deal. The previous CEO of Biolase, Todd Norbe, stated at the time that “this latest offering has bolstered our cash to over $40 million and provides us with the necessary resources to execute the Biolase growth strategy.”

The pandemic obviously affected Biolase early on. However, the company states that dental procedures have resumed to nearly pre-covid levels. Whether or not this makes BIOL a penny stock to watch is up to you.