February closed out with a tumultuous week of trading in more than just penny stocks. Fears of inflation and uncertainty about the final stimulus plan triggered large sell-offs last week. Whether you were looking at small-caps or broader sector stocks in the S&P or Nasdaq, it seems that no sector was safe.

Now we turn the page and enter a new month. March will mark the final string of weeks that close the book on the first quarter of a year where stocks are still trying to bounce back from the global pandemic. This includes the jobs market, which hasn’t echoed a positive sentiment about the economy. This week that will likely become the major focus for traders.

Considering that it’s coming out Friday, I’m sure we’ll see plenty of speculative trading in the market. This February employment report is an important look at the effects of the virus on the economy. Considering just 49,000 jobs were added in January, hopes are high for a February rebound. Economists are expecting to see 218,000 jobs added, with the unemployment rate remaining the same at 6.3%, according to Dow Jones.

Despite the economic data, we’re talking about penny stocks in this article. These names tend to do things like breakout when the market plummets or breakdown when the market rises. The long and short of it is that these cheap stocks are usually moving based on other factors. Take, for instance, last Friday’s big winner, Xtant Medical (NYSE: XTNT). While the markets dipped, XTNT stock skyrocketed from around $2 to highs of $6.58. It also managed to close above $4.30. That percentage change was a stark difference from what news headlines stated was a bearish close to February.

This brings me to my next point: small-cap biotech stocks have been big winners this year. Now, not all penny stocks with exposure to health sciences experience moves like XTNT. However, if you look at some of the biggest movers of the year, many of them are biotech penny stocks. The speculative nature of preclinical or early stage, clinical companies help with this. The idea is that you’re looking at companies during the very early stages of growth and, for most, they still have yet to produce revenue.

Opportunities like licensing deals, acquisitions, mergers, and the like are all events that traders looking at these types of penny stocks hope for. One of the other things I personally like about the sector is that companies will pre-announce when they plan on reporting data; there’s usually plenty of data to track. Everything from When a phase trial begins or when patient enrollment starts to efficacy data and FDA application dates can all be their own catalysts.

Heading into March, we’ll track companies that have previously announced plans to update on company events. Why is March important? The reason is the position it sits in for the quarter. Companies that planned on announcing data in Q1 are now under the gun, with March being the final month. It’s also important to keep in mind is that these potential catalysts could also present big risks. If these companies report bad data instead of good or come up short of expectations, the market’s result could be a negative one. With all of this in mind, let’s take a look at 5 companies and what they’ve set out to achieve this month

This week could be an important one for Spectrum. The company has two presentations, one oral and one eposter, at the European Society for Medical Oncology Targeted Anticancer Therapies. The first presentation is on Monday and covers IGN002 (antiCD20-IFNα2b) intravenously administered tumor-targeted delivery of Spectrum’s IFNα2b and its effects in non-Hodgkin lymphoma. The second will be on Tuesday. This may carry a bit more weight as well. Tuesday’s presentation discusses the safety, tolerability, and preliminary efficacy of poziotinib with a twice-daily strategy in EGFR/HER2 Exon 20 mutant non-small cell lung cancer.

Now, why could this carry more weight? In December, the company announced that Cohort 3 of its ZENITH20 clinical trial of an oral once-daily dose of 16 mg of poziotinib didn’t meet the primary endpoint. This is where you’ll see the big drop before the new year. As I said above, it’s important to note these dates, but it doesn’t mean the details will also be bullish for the stock. However, FDA has agreed to the submission of an NDA for poziotinib for non-small cell lung cancer in previously treated patients with HER2 exon 20 insertion mutations. That NDA submission is planned for this year.

Heading into the first week of March, SPPI kicks things off early with 2 key developments to note. 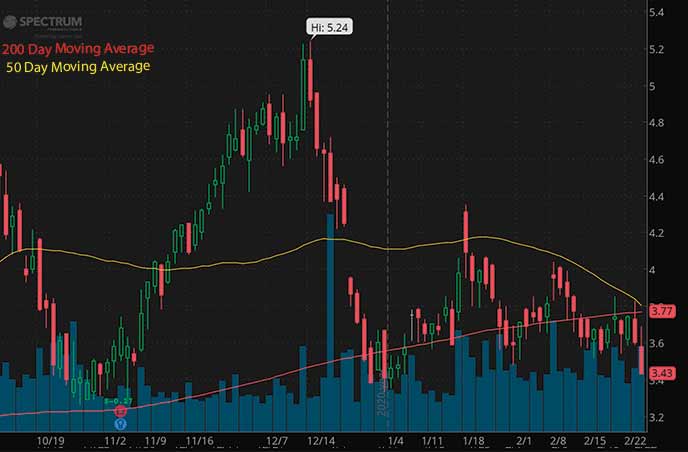 Shares of ASLAN Pharmaceuticals have been red hot this year. The penny stock began 2021 at $1.85 and reached highs of $5.49 last week before closing out Friday’s session at $4.43. March could be an important month for the company said last week that interim data from its ongoing study of ASLAN004 in atopic dermatitis is expected in “early March.”

I know this week is the earliest part of “early March,” it’s important to keep this event in mind if ASLN stock is on your list. What’s more, the company just raised $18 million with new institutional investors, Vivo Capital and Surveyor Capital. These funds will go toward advancing the clinical development of ASLAN004, among other things. ASLAN is also planning to start a phase 2b program later this year. However, a lot of that timeline could hinge on unblinding the interim data from the ASLAN004 study this month. 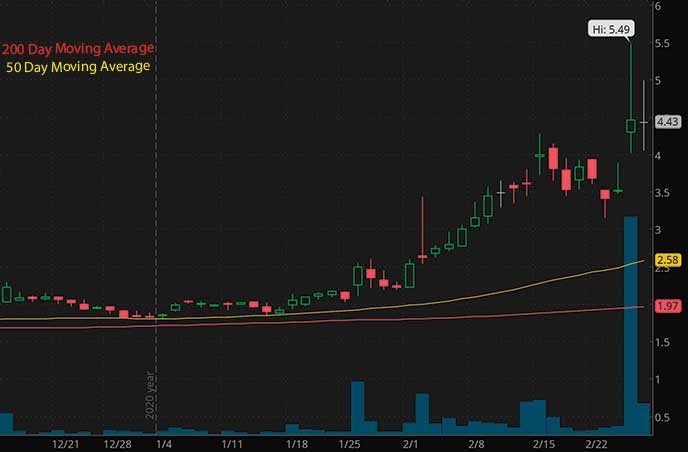 GlycoMimetics fell victim to the broader market sell-off recently. In fact, since February 19th, shares of GLYC stock have been in an aggressive downtrend. Adding more fuel to the fire was news that Helen Thackray, M.D., FAAP, Senior Vice President, Clinical Development, and Chief Medical Officer would be resigning. Obviously, for a biotech company, your Chief Medical Officer is a big piece of the business. Needless to say, the company appeared optimistic about its new CMO, Eric J. Feldman, M.D. He was already the company’s Vice President of Clinical Development.

There are a few things to keep in mind heading into March when it comes to GlycoMimetics. First, this week the company is set to report fourth-quarter and year-end results for 2020 on Tuesday. What may be a bit more pressing is what comes after that. March is a busy month for GlycoMimetics. The company presents at 3 upcoming industry events throughout the month. These include the Cowen Health Care Conference this week, H.C. Wainwright’s Global Life Sciences Conference next week, and The Roth Conference during the week of the 15th. 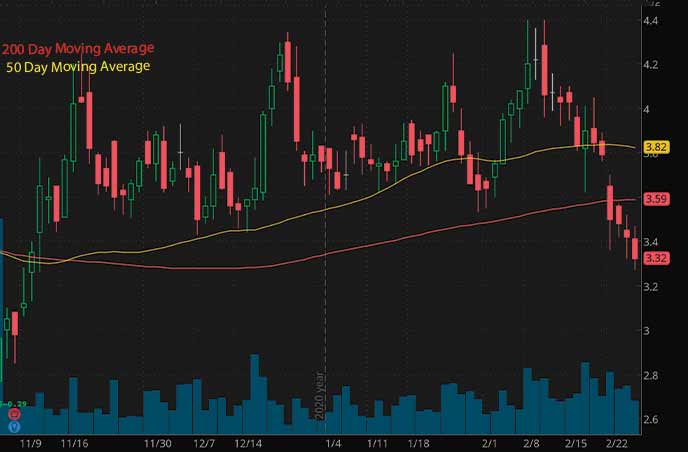 Zomedica is a long-standing name on our lists of penny stocks to watch. Shares have rallied from 6 cents in November to highs of $2.91 this year. The 4,750% move was fueled by speculation, shameless hype, and the potential to see the company before it commercially launched a new product. All of this has to do with the company’s animal diagnostic device, TRUFORMA. If you want to read some of the past commentaries on ZOM stock to get you up to speed on all of the crazy events that have happened (including one involving Carole Baskin), you can read more curated content here.

Needless to say, I’ll cut to the chase. Zomedica is at the center of attention because March is expected to mark the start of commercial sales of TRUFORMA. Furthermore, ZOM stock gained some momentum recently after reporting its latest round of earnings. Loss per share shrunk from 19 cents last year to just a 5 cent loss in this latest quarter. Robert Cohen, Zomedica’s CEO, commented: “While we are thankful for our substantially improved balance sheet, we continue to be good stewards of our funds by remaining efficient in our operations as we prepare for the upcoming commercial release of TRUFORMA®.”

The event marks the first time Zomedica could have something that would generate revenue for the company. With sales planned to begin on March 31st, this could be a big month for the company and something to keep in mind if ZOM stock is on your list. 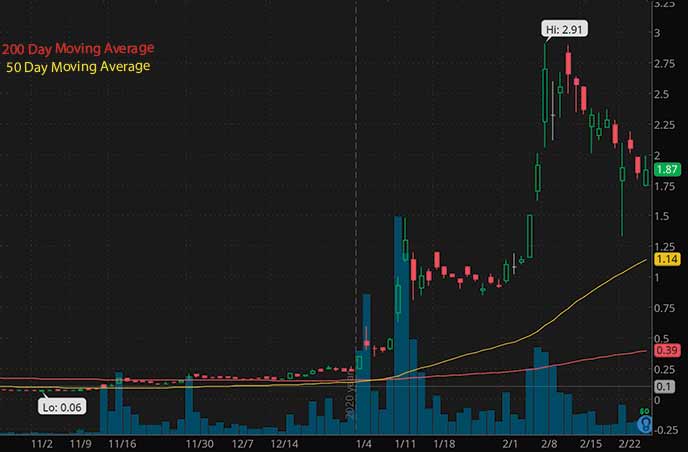 In the case of Sio Gene, March could be an interesting month after what happened on Friday. In its filings, a 13G showed a stake taken in the company by former SAC Capital CIO Aaron Cowen’s related funds. Institutional interest is obviously something that investors look for as a sign of confidence in the market. With this latest stake by notable names like Cowen’s, it seems that SIOX traders were bullish on the event. This came as a welcome sign to those who’ve been following the stock in February. SIOX was in a state of perpetual decline since giving a business update earlier in the month.

You might remember Sio Gene Therapies Inc. by a different name as it is the new company name of Axovant Gene Therapies (f/k/a AXGT). Last year, the company rebranded to Sio Gene Therapies to reflect a company with a scientific strategy focused on disease-modifying and curative genetic medicines. In line with this, Sio has begun dosing patients with infantile Tay-Sachs disease in a Phase 1/2 trial evaluating AXO-AAV-GM2. This is the company’s investigational gene therapy for the treatment of Tay-Sachs or Sandhoff disease.

The company has a partnership with Viralgen, an AskBio subsidiary, to support AAV-based vector manufacturing of clinical trial material for the registrational study. With plans to advance the program through strategic partnerships with leading research organizations, Sio could be a name to watch as 2021 roles on. 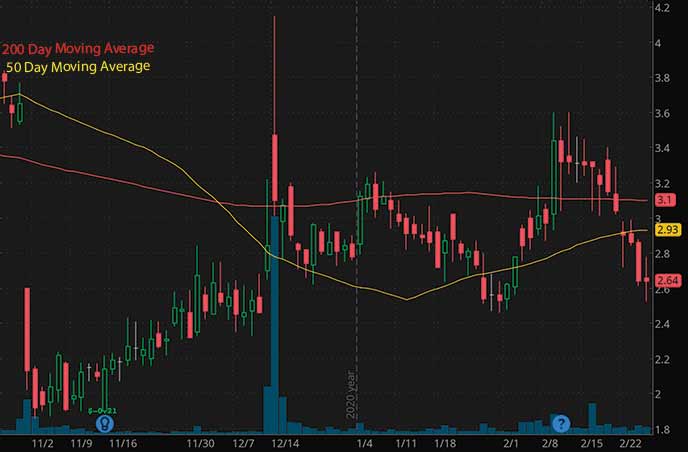