Best Stocks To Buy Right Now? 4 To Watch Next Week

As we end another week in February, investors are continuously searching for the best penny stocks to buy right now. Oftentimes, traders will use big, after-hours movers in order to create a watchlist for the near term. While this can be a good strategy, you should always research the reasons for such large moves and if they can sustain that trend during the sessions to come.

In the past few months, we have watched as the stock market has become more volatile. This volatility is partly due to geopolitical factors at play and the entrance of retail traders in a high concentration. Because of apps like Robinhood and WeBull, anyone has the power to execute trades right from the palm of their hand.

At first, volatility may seem like an undesired factor. But, if you know how to use it to your advantage, large swings in the market can be profitable. Next, we have to consider the current factors at play outside of the stock market. This includes the massive stimulus package in the U.S., increasing energy demand, and new tech & EV boom. With all of this in mind, here are four penny stocks that pushed up big during after hours on February 19th. Will that be how they start the week ahead, or should you avoid them for now?

As far as eco-centered penny stocks go, RETO is quite an interesting one. The company manufactures and distributes building materials in China. Because China has been industrializing so heavily in the past decade, companies have benefitted quite a lot in that time. Also, the country has been working to become more eco-centered in many ways.

This includes electric vehicles, cleaner power solutions, and more eco-friendly building materials. As a producer of everything from tiles to bricks and more, it looks like ReTo is in the right position to take advantage of this growing market in China. The company also offers many engineering solutions, including work for governments and automated manufacturing equipment.

Additionally, the company states that it exports its products worldwide, which further broadens its market. A few weeks ago, the company announced that it had received funding from the government to launch the Beijing Winter Olympics Competition Zone Project. The company has been working for many months to figure out a solution to such a large engineering project. Li Hengfang, CEO of ReTo, stated that “we are very excited to have a role in this showcase nation project, which is directly aligned with our philosophy of Technology Improves Ecology.” 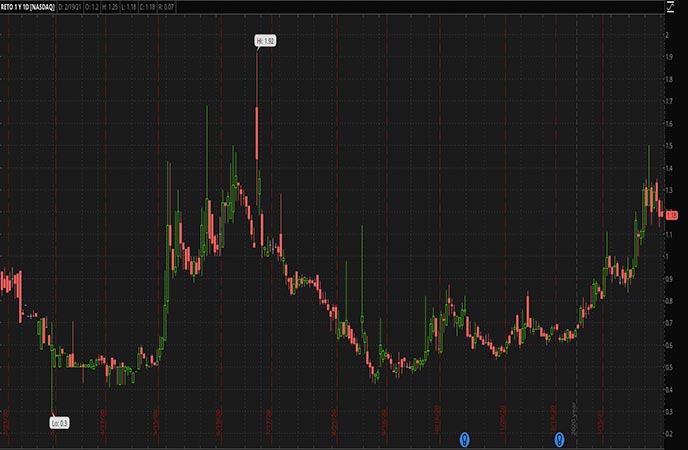 This is a penny stock that we’ve written about many times in the past few months. Tyme is a biotech company working with its large pipeline of high-tech products for those who don’t know. The company has seen several trading days of double or even triple-digit gains in the past few months. One of the reasons for this is its role in the covid pandemic. A few weeks ago, the company announced that it had received a patent for its Covid-19 metabolomic technology platform. Obviously, we’ve seen massive speculative arise in several biotech companies that deal with the virus. So to see TYME stock shoot up by double digits in a given day makes sense.

One thing to keep in mind is that things have become highly speculative in the past few months. But, the technology behind its platform is quite groundbreaking. The company states that it is not subject to lessened efficacy based on new strains of the pandemic because its product utilizes a coronavirus coating.

Studies are still in the works, trying to see how current treatments are affected by Covid variants. In the meantime, other companies are working to put out substances that still work against these variants. In addition to this, Tyme is also entering into clinical testing for its SM-88 pancreatic cancer treatment. But, clearly, a near-term point of focus is likely on its potential involvement with the company’s Covid treatment among other things in its pipeline. With these factors in mind, is TYME a penny stock to watch? 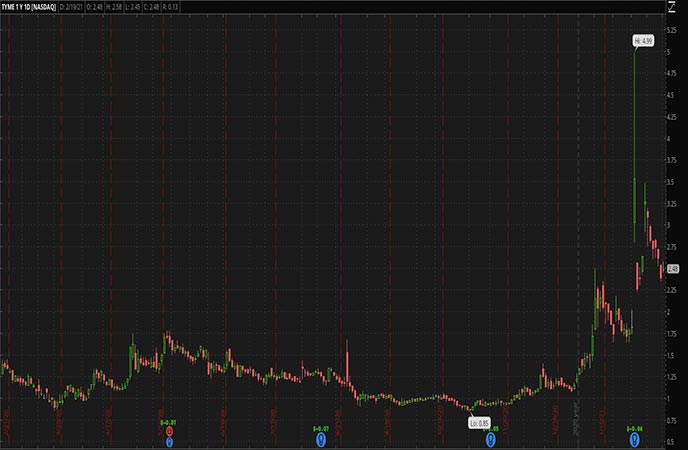 At $4.81 per share at the end of the week, TRMT is at the higher end of penny stock levels. The large spike in value on February 19th comes as Tremont announced its Q4 2020 financial results. In the report, President Thomas Lorenzini stated that “we reported solid fourth-quarter and full-year 2020 results that reflect our proactive measures over the past year to preserve liquidity, and enhance the stability of our balance sheet and actively manage our loans. During the fourth quarter, our portfolio’s overall performance improved further, as we upgraded the risk ratings of two loans based upon continued improvement of the underlying collateral.”

The company posted $2.2 million in net income in the quarter, with an EPS of $0.26. This is compared to $1.3 million in the same quarter of the previous year. The company also reported that all $293.9 million in aggregate loan commitments were invested in a diverse portfolio. Obviously, it is difficult to consider investing in a mortgage trust with interest rates near zero and defaults climbing. For now, it looks like TRMT may remain highly speculative. But this speculation could be an advantage given the right circumstances. As real estate continues to turn around commercially, TRMT could be one of the penny stocks to watch. 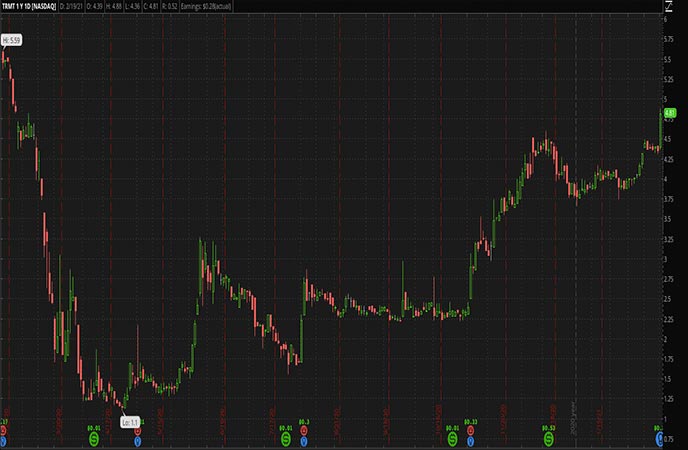 Novan Inc. is another penny stock that we cover quite often. The company regularly puts out a great deal of information, which is a big benefit to traders. While NOVN can be highly speculative, the company does have a lot of wheels in motion. The company is a clinical-stage biotech firm utilizing its Nitric-Oxide-based tech platform to create new drugs. This platform, known as Nitricil, could be used in several areas of medicine. That includes dermatology, general health, infectious disease treatment, gastroenterology, and more.

Currently, its leading product candidate, SB206, is a topical gel that is an effective antiviral against molluscum contagiosum. This compound is in Phase 3 clinical study, B-SIMPLE4, where it is undergoing evaluation for efficacy in treating molluscum. This is an exciting update, as having a compound in a Phase 3 trial is always an important thing to consider. This means that the company could be looking to secure commercialization. Obviously, it will take some time before anything comes to a close. But in the meantime, SB206 looks like it may have the potential to treat this disease. For these reasons, NOVN could be worth watching. 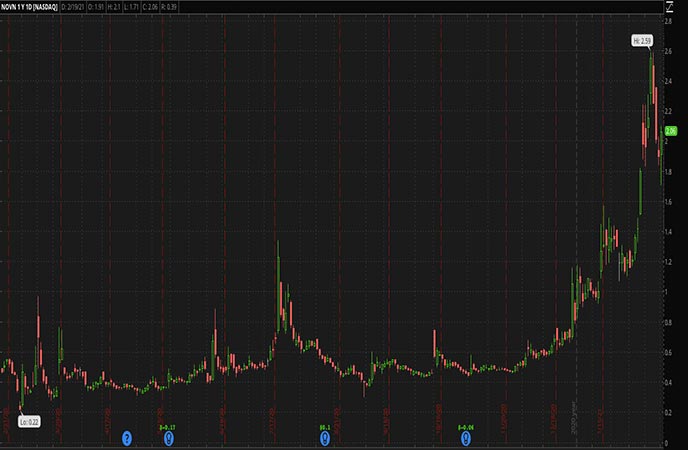