3 Stocks to Buy for the Economy Reopening: Uber, Allegiant Airlines, and Airbnb

By: StockNews.com
It's hard to imagine now given the current challenges and limits on activity due to the pandemic, but the intermediate-term future is looking promising for the travel sector. Investors should consider buying Uber (UBER), Allegiant Travel (ALGT), and Airbnb (ABNB).

So far, 2021 seems to be following the same path as 2020. We are witnessing historical events, while the stock market blithely trucks higher.

Meanwhile, the coronavirus is imposing a significant challenge and strain for many parts of the economy.

Yet, there are some meaningful differences under-the-surface that are reasons to be more optimistic about the public health and economic outlook for later this year. The biggest is that vaccines are starting to be distributed. There have been some hiccups in the early phases of the process, but the pace is starting to pick up.

As the population gets vaccinated, we are going to see huge bursts of economic activity particularly in depressed sectors like airlines, hotels, and cruises. In fact, we can get some insight into this brighter future by looking at countries that have fully reopened.

Australia is considered a success story as the country has managed to bring its new case count to around 20 cases per day since September. As a result, its economy has fully reopened now for a couple of months. The major takeaway is that demand returned to 2019 levels in a month and after a couple of months was significantly above these levels.

For example, restaurant reservations in December were 60% above 2019.

Similarly, hotel demand is also quite strong and has followed the same pattern according to search interest on Google. 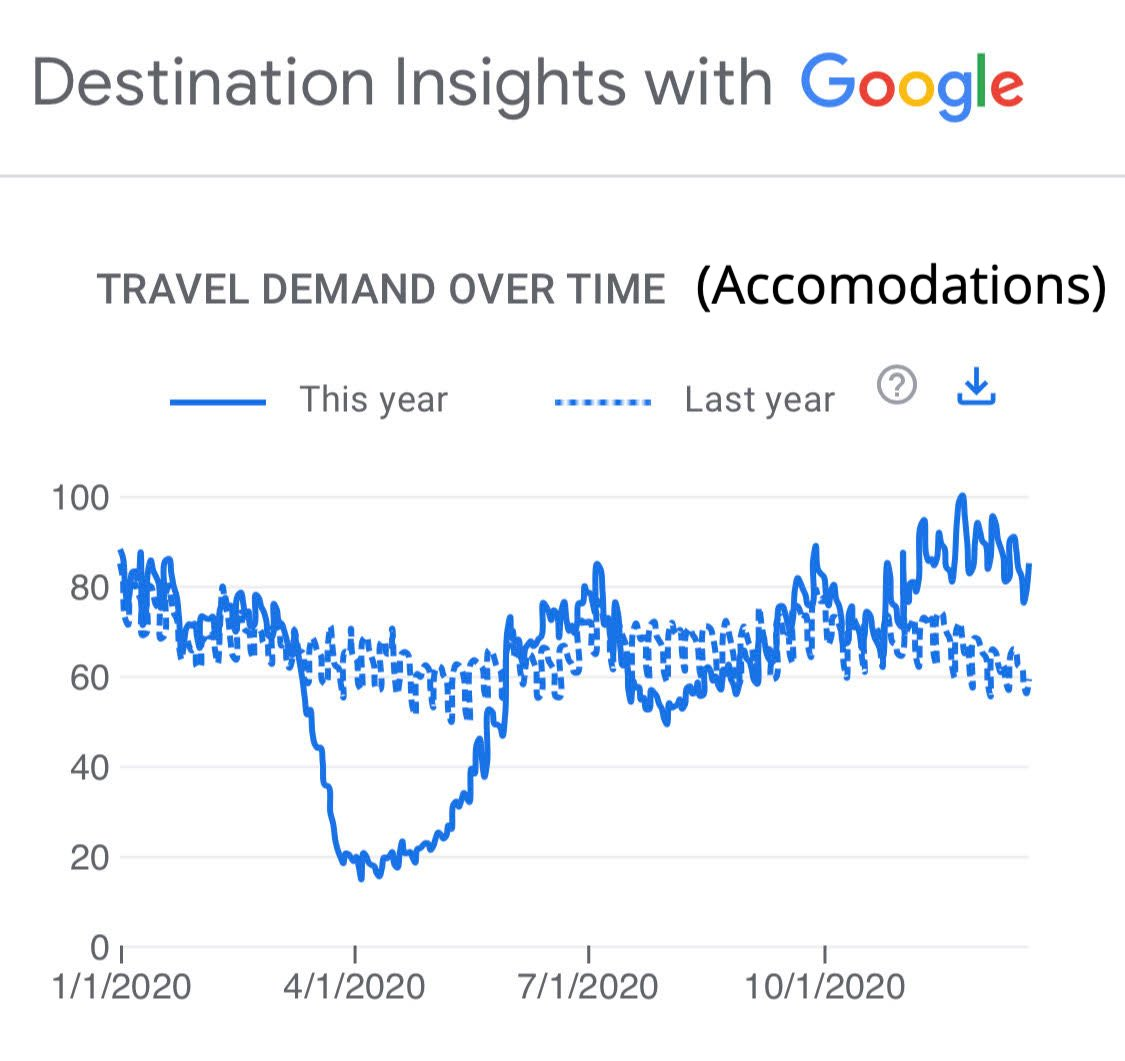 In February of 2020, China was the first economy to shut down due to the coronavirus. It gave us a preview of the coronavirus-economy as eCommerce, video conferencing, and food delivery demand exploded.

Now, this Australian data is giving us a glimpse into our future, and it’s validating the theory that the most-affected parts of the economy will experience extraordinary demand. It dispels the idea that people would be hesitant to travel or go out due to lingering concerns around the virus.

Although travel stocks have rebounded off their lows, I don’t think they are reflecting the extent of pent-up demand that will be unleashed later this year and in 2022. It will lead to a spike higher in earnings due to increased sales and more pricing power.

To take advantage of this post-coronavirus economy, investors should consider investing in Uber (UBER), Allegiant Air (ALGT), and Airbnb (ABNB).

An increase in people going out and traveling will certainly benefit UBER due to its dominance in ride-sharing. UBER was negatively affected by the coronavirus, however, it was able to offset some of this weakness due to explosive growth for its food-delivery unit - Uber Eats.

Last quarter, the company reported a loss of $0.62 per share and $3.1 billion in revenue. Ride-sharing dropped by 57%, while deliveries increased by 190%. Shares initially dropped following results but perked up when its CEO said that he expects ride-sharing to fully recover. He also added that Uber had increased market share in 11 of the top 15 markets.

The company also expects to become EBITDA positive in 2021. Increased demand in the post-pandemic economy will likely lead to increased growth and earnings. Uber Eats also increased penetration due to the coronavirus. Growth will likely slow but the total addressable market (TAM) for its service has meaningfully expanded.

Uber is rated a Strong Buy by the POWR Ratings. It has an “A” for Trade Grade, Buy & Hold Grade, and Peer Grade. Among Technology - Services stocks, it’s ranked #17 out of 81. Wall Street analysts are also bullish on the stock as it has a Buy or Strong Buy rating from 34 out of 40 analysts.

ALGT has outperformed its peers. Since the March low, it’s up 213%. In contrast, the US Global Jets ETF (JETS) has a 106% increase from its March lows.

ALGT is well-positioned for the coronavirus economy. While I expect consumer travel to be strong, I think business travel could be negatively impacted especially as some chunks may be permanently displaced due to the increased adoption of video conferencing.

International travel is also likely to lag in terms of its recovery as different countries will have different protocols and reopening schedules.

This puts ALGT in a strong position as it’s a regional airline that flies less-trafficked routes with less competition. It also serves a variety of vacation destinations. I believe that the earliest segment of travel to recover will be trips to vacation destinations and family visits.

ALGT is rated a “Strong Buy” by the POWR Ratings. It has an “A” for Trade Grade, Buy & Hold Grade, and Peer Grade. Among Airline stocks, it’s ranked #1 out of 27. The stock has been upgraded by analysts regularly over the past couple of months. Remarkably, the company’s operating income is profitable on a trailing-twelve-month basis. I believe that it will continue to trend higher in 2021.

ABNB is interesting to me because it’s more of a marketplace rather than a company. The services have rentals for all types of customers, from the budget-conscious to luxury. Many people prefer to rent through ABNB during their travel rather than stay in hotels especially among Generation Z and Millennials. The permanent increase in remote work also increases the attractiveness of ABNB rentals for vacations as opposed to hotels.

The platform is also being increasingly used for short-term rentals for workers and students. The coronavirus negatively impacted ABNB’s growth as revenues declined by 19%. However, the company remained profitable, since it’s business is relatively capital-light.

ABNB also benefits from network effects. Thus, like many tech segments, the company is likely to hold onto its monopoly-like position in this area. Renters flock to the platform since it has the most offerings. In turn, this attracts more listings. Before the pandemic, ABNB was in secular growth mode, and I believe it will return to this trend post-pandemic.

About the Author: Jaimini Desai

Jaimini Desai has been a financial writer and reporter for nearly a decade. His goal is to help readers identify risks and opportunities in the markets. As a reporter, he covered the bond market, earnings, and economic data, publishing multiple times a day to readers all over the world. Learn more about Jaimini’s background, along with links to his most recent articles.

The post 3 Stocks to Buy for the Economy Reopening: Uber, Allegiant Airlines, and Airbnb appeared first on StockNews.com
Data & News supplied by www.cloudquote.io
Stock quotes supplied by Barchart
Quotes delayed at least 20 minutes.
By accessing this page, you agree to the following
Privacy Policy and Terms and Conditions.