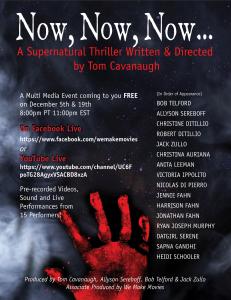 We Make Movies is the tech savvy film collective that has your back.

My Passion Project through the Pandemic! I was sitting home watching Zoom workshops, Zoom performances and wishing I could be back in a theater somewhere!”— Tom CavanaughLOS ANGELES, CA, UNITED STATES, December 2, 2020 /EINPresswire.com/ -- NOW, NOW, NOW…

A ZOOM SUPERNATURAL THRILLER IS BACK AFTER A VIRAL OPENING, THIS PAST OCTOBER, RETURNING FOR TWO ADDITIONAL DECEMBER SHOWS!

Director Tom Cavanaugh received his M.F.A. in playwriting from the Actors Studio Drama School in 2000. Tom's full length play, BEHOLD was a 2010 finalist New American Playwrights Program at Utah Shakespearean Festival and won a 2011 Pickering Award for Excellence in Playwriting. ADAM & YOSHI was a finalist in McKinney Repertory Play Competition, Texas, finalist 2013 New American Playwrights Program Utah Shakespearean Festival and won 2012 Make the House Roar Prize at Lionheart Theater, Georgia. 2014, INLAND EMPRESS, Tom’s full length play, World Premiered, at The Lounge Theatre, Los Angeles. 2017 MISTER PICMAN, premiered at the Short & Sweet Play Festival, Hollywood, CA, & Theatre of Note’s Alternative Acts in Los Angeles. THE FIELD a short play by Cavanaugh premiered at The CTI Theatre Festival in Independence, MO. In 2018, Theatre of Action in Los Angele’s Plays About Immigration listed Tom’s short play, COYOTE. Tom won the Artists & Playwright Festival at The Know Theatre in Binghamton, NY in 2018 with his short play, ROCKS ON THE PLAYS. Tom was a member of the 2019 National Playwrights Symposium at Cape May Stages in New Jersey and has been a member of the Dramatist Guild of America since 1998.

Now, Now, Now… is Cavanaugh’s “Passion Project through the Pandemic! He says, “I was sitting home watching Zoom workshops, Zoom performances and wishing I could be back in a theatre somewhere! I thought, why wait for the virus to end? Why not learn how to navigate this new media and try to create a production that would combine everything I love about film, television and live theater and here we are!”

The show centers on characters that are receiving a mysterious email, a children’s song with a series of numbers at the end. The song places the readers in a trance like state causing strange people and events to enter their lives. The song and its encoded message goes out to millions and seems to be part of the larger plan, a possible invasion. People are being kidnapped and their loved ones are left behind to solve the mystery and fight back, but will they?