Dole to Prince Harry: Don’t Give up on Your Banana Dreams! 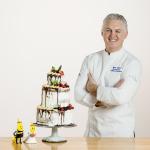 Dole isn’t giving up on its quest to make sure Prince Harry and Meghan Markle enjoy the banana wedding – or least the banana cake – of their dreams.

Dole's Executive Chef Mark Allison with a preview of the banana-inspired "groom's cake" offered to Prince Harry for his May 2018 wedding to Meghan Markle (Photo: Business Wire)

In response to reports this week that the royal couple’s wedding cake will now feature lemon and elderflower instead of bananas, Dole’s “top-banana” Executive Chef Mark Allison has unveiled a banana “groom’s cake” that could satisfy the cravings of the famously banana-loving prince on his May 19, 2018, wedding day.

A tradition that dates back to England in the late 19th century and gained popularity in the American south – smaller, less formal groom’s cakes are typically baked to the specific tastes and preferences of the groom.

When the royal couple hinted last year that they were considering a banana-flavored wedding cake instead of the traditional British fruitcake, Dole offered the services of Allison to personally create and present a wedding cake that could live up the couple’s well-documented love for the world’s most popular fruit.

Since the official royal wedding cake will now not feature bananas, the produce leader now hopes it can still deliver on Prince Harry’s passion for the sweet yellow fruit with a banana-inspired “groom’s cake,” to serve at the reception at Windsor Castle.

The world’s largest banana provider also released a pair of inspirational bake-it-yourself banana cake recipes for the hundreds of millions of royal watchers who didn’t get a wedding invite but want to celebrate at home, plus the next in its series of social memes celebrating the pair’s banana-infused courtship.

Challenged with the hypothetical cake-baking assignment of a lifetime, Mark Allison, director of culinary nutrition at the Dole Nutrition Institute (DNI) in Kannapolis, N.C., is proposing a three-tiered banana sponge cake and topped it with low fat Greek yogurt, fresh meringue and seasonal fruit instead of traditional frosting to meet the strict nutritional guidelines of Dole and DNI while still being an extremely delicious dessert worthy of inclusion at the royal wedding – even if on the side.

According to Allison, a U.K. native who moved from West Glamorgan, Wales, to the U.S. in 2004, the result combines Windsor Castle-caliber elegance with nutrition and the unmistakable banana taste the Prince of Wales loves.

“I created this groom’s cake to show the extraordinary possibilities of cooking with bananas and other fruit – even for the most elegant occasions,” he said. “By substituting low fat Greek yogurt for traditional sugar-based frosting and icing, and decorating the cake with fresh bananas, strawberries and raspberries, we can serve a cake that Harry, the future Duchess and entire Royal Family can indulge in without guilt or hesitation.”

Allison, a 37-year culinary arts veteran and former dean of culinary arts education at Johnson & Wales University (JWU), said designing a banana cake worthy of the Royal Family would represent a higher calling, both personally and professionally. “I’d work with them to create a cake they would be proud to present not only to England but to the millions of fellow banana lovers around the world.”

In a nod to royal watchers, Allison developed conventional and gluten-free banana DIY wedding cake recipes patterned after his concept cake for the royal couple. The two “I Do Love Bananas Cake” recipes are based on DOLE® Bananas and serve 12.

Dole also released its third congratulatory banana meme inspired by Markle sharing a photo on Instagram in 2016 of two bananas embracing each other. As a follow-up to its royal banana proposal meme last year, the company posted an illustration of a banana Duchess at her wedding gown-fitting and plans to continue the royal banana courtship conversation with future memes.

Dole Food Company, Inc., is one of the world’s largest producers and marketers of high-quality fresh fruit and fresh vegetables. Dole is an industry leader in many of the products it sells, as well as in nutrition education and research. For more information, visit www.dole.com or follow us on Facebook at www.facebook.com/dole.