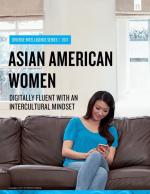 Asian American women are shaping brands and products through trendsetting buying behaviors heavily influenced by a global perspective and multicultural sensibility. According to Asian American Women: Digitally Fluent with an Intercultural Mindset, a Nielsen report released today, at an average age of 36, Asian American females are overwhelmingly multilingual, diverse and have a cross-cultural mindset firmly rooted in the values and traditions of their native countries.

According to the annual Nielsen report, Asian American women are tech-savvy jetsetters. This group is in a constant state of discovering new content and consumer products as they travel the world, juggle family and pursue professional goals. At work, 39% of Asian American women are entrepreneurs, and 46% say their goal is to make it to the top of their profession. When it comes to spending, they’re not afraid to demand brands and products that support and speak to their values or personal goals: setting the stage for trends that are yet to hit the mainstream marketplace.

“For brands, this fast-growing, young and digitally fluent consumer segment's ability to influence trends can not be ignored,” said Mariko Carpenter, vice president, Strategic Community Alliances, Nielsen. “Asian American females are the group to watch. At 19%, Asian American women comprise the largest group to immigrate to the United States between 2010 and 2015. Highly educated and adventurous—Asian American females are not only discovering new products and experiences as they explore the world, but they are also using social media to create shareable content that influences the marketplace.”

This new report is part of Nielsen's ongoing efforts to provide insights that help marketers better understand and serve Asian American consumers, who are the fastest growing U.S. racial group, having increased 47% in population growth the last 10 years. This report is the first of the three-part 2017 Diverse Intelligence Series that will focus on women of color, with the Hispanic and African American installments being released later this year.

“Nielsen continues to prove it is the definitive source of data and insights on consumers of color,” said Sharmila Fowler, member, Nielsen Asian Pacific American External Advisory Council. “Culturally relevant data about our multifaceted community are a vital tool for delivering better products, services and content to Asian Americans. This is why it is so important for consumers of color to say ‘yes’ if the opportunity to participate in a Nielsen survey or panel arises.”

Ambicultural with an Immigrant Edge

About Nielsen
Nielsen Holdings plc (NYSE: NLSN) is a global performance management company that provides a comprehensive understanding of what consumers watch and buy. Nielsen’s Watch segment provides media and advertising clients with Total Audience measurement services for all devices on which content—video, audio and text—is consumed. The Buy segment offers consumer packaged goods manufacturers and retailers the industry’s only global view of retail performance measurement. By integrating information from its Watch and Buy segments and other data sources, Nielsen also provides its clients with analytics that help improve performance. Nielsen, an S&P 500 company, has operations in over 100 countries, covering more than 90% of the world’s population. For more information, visit www.nielsen.com.