Trifecta Time: At Duck X Productions’ Lights Out12, Coast Packing/R&E Racing Qualifies #1, Sets World Record at 3.502 in Radial vs the World – and Wins 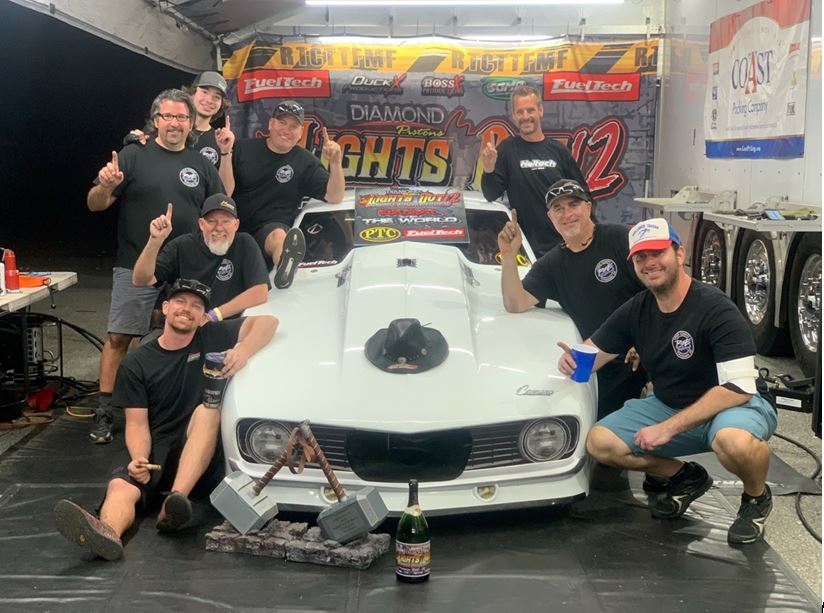 For a while now, South Georgia Motor Sports Park (SGMP) in Adel has been very good to Coast Packing Company’s R&E Racing division.

Like last Wednesday.  As CompetitionPlus reported, “During the first qualifying session at the Lights Out 12, in the first pair down the highly-prepared South Georgia Motorsports Park, [driver Jason] Lee went to the top of the qualifying list and established the quickest mark in small tire racing with a 3.502 elapsed time at 211.46 miles per hour.  Just how stout was Lee’s first hit? Bryan Markiewicz was second quickest with a 3.567, while Marcus Birt was third with a 3.584 (https://m.youtube.com/watch?v=CFiYTTi-Ero).”  Lee shattered the record behind the wheel of R&E’s ’69 Noonan Hemi ProCharger Pro Mod Camaro.

And after that blistering, record-setting qualifying time, the Coast Packing/R&E team wrapped up the weekend with a win.  It was only the fourth Radial vs. The World event for Lee and the R&E team (http://competitionplus.com/drag-racing/news/lee-nails-new-rvw-record-to-pace-day-one-lights-out-12).

“What an unbelievable team effort!” enthused Eric R. Gustafson, R&E team owner and Coast Packing CEO.  “Whether we are racing or making the best shortenings, we always work as a team. We win as a team and lose as a team — there is no other way!

Now marking its 99th year in business, Coast Packing Company (www.coastpacking.com), a closely held corporation, is the number one supplier of animal fat shortenings – particularly lard and beef tallow — in the Western United States. The company sells to major manufacturers, distributors, retailers, smaller food service operations and leading bakeries. The company participates actively in diverse ethnic markets – from Hispanic retail chains, with its VIVA brand, to various Asian specialty markets. Based in Vernon, Calif., Coast Packing Company is regional, national and, increasingly, global. In some cases, supplier relationships are multigenerational, extending back 50 years and more. Coast is a founding member of the Healthy Fats Coalition (http://www.healthyfatscoalition.org/).

The post Trifecta Time: At Duck X Productions’ Lights Out12, Coast Packing/R&E Racing Qualifies #1, Sets World Record at 3.502 in Radial vs the World - and Wins first appeared on PRUnderground.