January 27th is quite a wild day for both blue-chip stocks and penny stocks. Overnight, shares of a few select companies shot up in the double and triple-digit percentages due to social media and retail investors’ influence. While the focus of these traders has been on companies like Gamestop Corp. (NYSE: GME) and Nokia (NYSE: NOK), there are plenty of penny stocks making big gains as well. If today’s trading says anything about the market, it’s that retail investors’ power remains very high.

The advent of Robinhood and other trading platforms have made it easy to buy penny stocks. We are seeing a new type of volatility in the stock market. And while today’s gains for the select companies mentioned above are extremely fickle, there are plenty of stocks that could have longer-term potential.

In light of the recent market momentum, small-cap stocks have been a big focus for traders. With that in mind, here are some hot penny stocks to watch as retail investors take over.

Shares of SWN stock were up by around 12%, to $3.69 around mid-day. This helped capture some interest in the market. We’ve covered the company quite a few times in the past several months. This is based on its continued performance and the performance of the energy sector as a whole. Before we dive deeper into SWN, we have to understand the greater industry that it operates in.

The company is an explorer and producer of natural gas based in the U.S. When the pandemic hit, energy demand dropped to lower levels in a short period of time. This makes sense given that little to no travel was occurring. Additionally, investors assumed that the demand would continue dropping in the following months.

Now, around a year after the pandemic began, vaccine distribution efforts are at an all-time high. This means that investors are feeling more confident about the energy industry’s future, and thus, companies like SWN. In the past six months, shares of SWN stock have shot up by around 50%.

While this is not a huge gain compared to other stocks today, it does signify a stable and solid bullish rise. Some investors believe that the energy sector could soon reach its pre-covid levels, if not higher. Where do you stand on the topic? 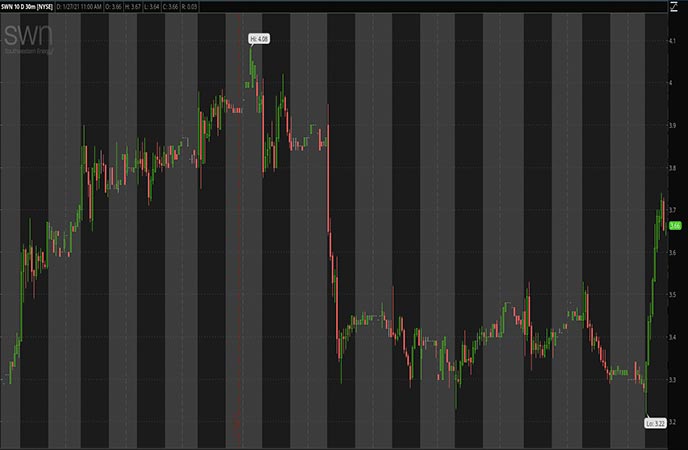 Another big gainer of the day is Peabody Energy Corp., pushing up by roughly 32% by midday. Interestingly enough, shares of BTU stock are hovering around $4.90 on January 27th, meaning that it could soon move out of penny stock territory. Peabody is another energy company, producing large quantities of coal for sale around the world. The company states that it serves customers across 25 countries.

While the use of coal is declining due to the clean energy boom, BTU has found a niche in that coal is needed to produce infrastructure around the world. This includes coal being utilized as the main source of fuel in many countries for producing steel. While covid is still running rampant, we could see case numbers decline shortly. This could mean that infrastructure and economic development could soon rise again, beating out pre-covid levels.

Of course, we have to consider the fact that clean energy is the way of the future. But in the present, there is still a very high demand for fossil fuels, including coal. On Tuesday, January 26th, the company announced that around $400 million worth of existing notes is now validly tendered and accepted for exchange. This announcement comes several months after the company announced the offering. At the end of 2019, Peabody stated that it had roughly 3.6 billion tons of proven and probable coal reserves and 500,000 acres of owned surface property. With this, Peabody remains one of the largest coal producers in America. Whether or not this information makes it one of the penny stocks to watch is up to you. 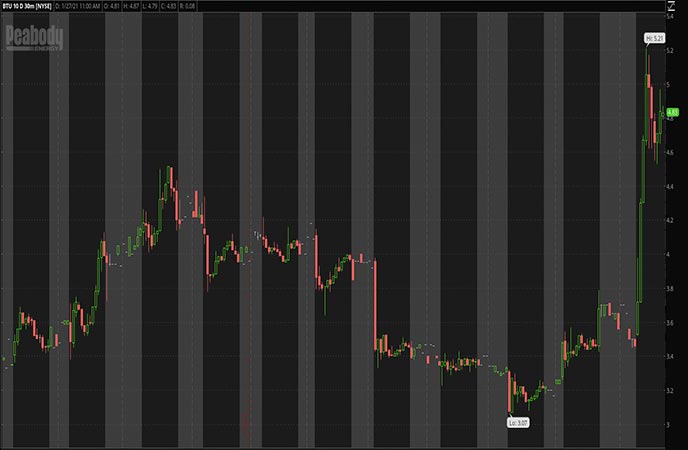 As we continue this list of big daily gainers, Castor Maritime Inc. comes in with a 20% gain at midday on January 27th. While you may not have heard of CTRM stock, the company has been making some big waves in the past few months. Through its various subsidiaries, Castor Maritime Inc. works in the ocean transport industry. Specifically, it offers seaborne transportation for mostly dry cargo. This includes the transport of iron, coal, grains, steel product, cement, and more. As you can see, its business model is quite broad, meaning that demand could remain high. Interestingly, we have to also consider that the demand for these products is not nearly as affected by covid as certain other industries.

The company states that it currently has three ships, that can together haul roughly 76,000 tons of cargo. Last week, Castor Maritime announced a $15.3 million debt financing deal at 3.3% interest per year. The CEO of Castor Maritime, Petros Panagiotidis, stated that “we are very pleased that this financing opportunity came to a successful completion. This new debt-financing, our largest to date, with its attractive cost of funds, will provide additional liquidity, enabling us to continue pursuing our strategic goals of expanding our fleet and delivering long-term profitability to our shareholders.” 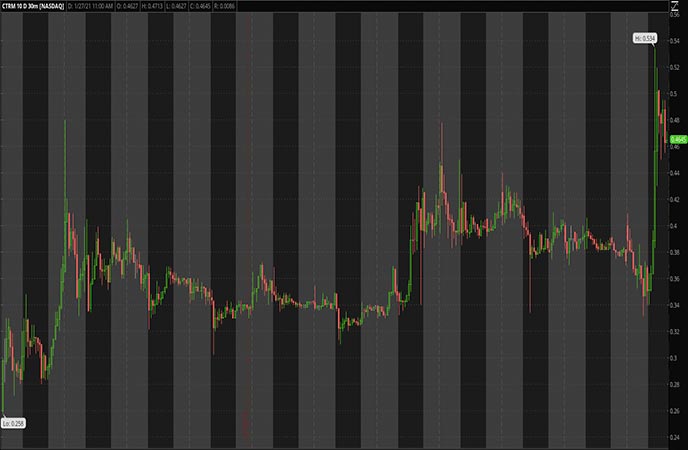 Transocean Ltd. It is another penny stock that we’ve been covering for quite a long time. Up 37% at midday on January 27th, shares of RIG are sitting at around $3.83. While this gain is large, no news came out during the day, sparking this large bullish rise. Regardless, let’s take a closer look at Transocean Ltd. The company is in the energy sector, which altogether saw a large rise in value on Wednesday.

[Read More] Penny Stocks To Buy Today? 3 On Robinhood, Webull & Others To Watch

As mentioned before, investors have been turning their attention to renewable energy penny stocks in the past six months. But, attention is also going to fossil fuel companies, as we’re still a long way away from seeing complete dependence on renewables. Early in the Wednesday session the energy sector was up by around 0.4%. When compared to the Dow slipping roughly 1.7% in early morning trading, this was quite a bullish sign.

It appears as though investors are becoming comfortable with the current trajectory of the pandemic. Although vaccine distribution is taking a considerable amount of time, things are beginning to look up. If this continues to be the case, we could see more bullish interest in fossil fuels and energy as a whole. With this, is RIG a penny stock to watch right now? 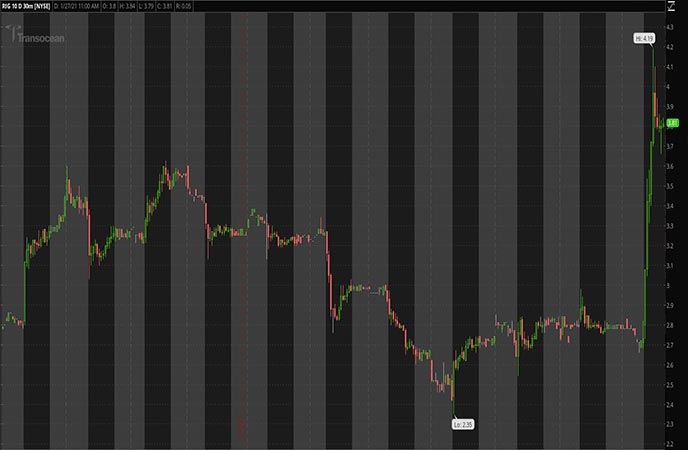