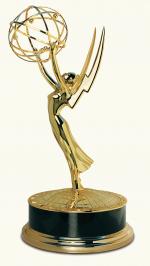 CommScope announced today that it will accept two Technical and Engineering Emmy® Awards for its leadership in IP Video Advertising technology. They acknowledge CommScope’s "Pioneering Development and Deployment of Server-Side Ad Manipulation and/or Playout for Adaptive Bitrate Video Distribution” and “Pioneering Deployment of the Event Signaling and Management API.”

“It’s an honor to again receive two of the greatest awards in the television industry,” said Morgan Kurk, executive vice president, CTO, and segment leader for Broadband Networks at CommScope. “For this to be our eighth Emmy® Award speaks to CommScope’s enduring leadership and commitment to progress in video technology. We owe this recognition to our talented team of engineers and visionaries who continue to advance our industry for the benefit of service providers, advertisers, and the billions of consumers who use our technology all over the world.”

CommScope’s latest awards are its seventh and eighth technical and engineering Emmy® Awards, bringing the company’s count to three in the advertising category. One of the awards recognizes CommScope’s pioneering work in Manifest Manipulation for IP video ad insertion, based on the trailblazing work done by customers using the CommScope Manifest Delivery Controller (MDC). CommScope’s advertising portfolio previously won an Emmy® Award for its linear digital ad insertion on traditional digital video networks, based on the market-leading SkyVision advertising management system and XMS Ad Servers.

The other award recognizes CommScope’s contribution to the development of the Event Signaling and Management API (ESAM), a CableLabs® specification for communicating between IP ad insertion components.

Together these two awards reinforce CommScope’s position as the leader in helping service providers maximize their existing advertising revenue and migrate from traditional TV to IP video. CommScope’s ad insertion portfolio addresses the needs of live, VOD, TSTV, and OTT delivery platforms on any device.

CommScope has a legacy of Emmy® Award-winning innovation that dates back to 1985. Since then, the company has been recognized with eight Emmy® Awards for pioneering many of the technologies that underpin the way the world watches television:

All product names, trademarks and registered trademarks are property of their respective owners.

About CommScope:
CommScope (NASDAQ: COMM) is pushing the boundaries of technology to create the world’s most advanced wired and wireless networks. Our global team of employees, innovators and technologists empower customers to anticipate what’s next and invent what’s possible. Discover more at www.commscope.com.