With the Weather Heating Up, All the Headlines Read "It's June in January" The Dispute is also Heating Up between Leo Robin Music and the Hollywood Walk of Fame Re: the Star ("#LeosLostStar") Awarded to the "June in January" Lyricist But Never Installed

SHERMAN OAKS, CA / ACCESSWIRE / January 14, 2021 / With the weather heating up this week in Hollywood, all the headlines today read "It's June in January," a refrain of the title of the jazz standard, composed by Ralph Rainger with lyrics by Leo Robin. Leo Robin would tell this story about the origins of the song: "One day Ralph Rainger came in and said, 'I hit on a little jingle tune, maybe you'll like it'. He started to play this thing, one of those kind of bouncy schottisches, and I said, 'Let me think about it', and as usual, I went out and started to walk around the Paramount lot. That was the way I used to concentrate during the day. When I came back, I said, 'Gee, I've got a great title' - no, I never said that, because I never thought any of those things were great. In fact, my dear wife used to say, if I had the Number One song on the Hit Parade - I would still say, 'Well, if they'd given me more time, I could have done it better'. So I just said, 'It's 'June in January'. Ralph said, 'You're crazy - 'June in January'?' ...Well, now, whenever the weather out here gets unusually hot in January, all the headlines use the phrase ''June-in-January weather'."

Dean Martin singing the beautiful popular standard "June in January,"
composed by Ralph Rainger with lyrics by Leo Robin, from his 1959 album A Winter Romance

"The notoriously modest wordsmith often downplayed his accomplishments, attributing whatever success he happened to have to any of his collaborators. But others continue to sing praises for his work," said Ashley Lee from the Los Angeles Times. More than 30 years ago, in 1988, both Cherie Robin, and actor, Bob Hope, wanted to see to it in their lifetime that the beloved lyricist would be acknowledged for the legacy that was to be reported on in Roy Trakin's 2019 Variety article; to this end, they sponsored Robin for a posthumous star on the Hollywood Walk of Fame. Tragically, Cherie Robin never received the good news about Leo's star because she passed away on May 28, 1989, a little over one year before the letter from the Hollywood Chamber was sent out on June 18, 1990 announcing that her husband had been awarded the star. As a result of these ill-fated circumstances, Leo's star was never installed. On July 6, 2017, Leo's grandson discovered Leo's long-lost star when he stumbled upon it on the internet. When, later that day, the grandson called the Hollywood Chamber and spoke to Ms. Martinez, he told her about his discovery of Leo's long-lost star; she officially confirmed it was true and said, "Nothing like this has ever happened before."

Almost two years later on May 23, 2019, Ashley Lee from the Times first broke the grandson's serendipitous discovery in her story, "Leo Robin never got his Walk of Fame star. Now his grandson is fighting for it." When, more than 30 years ago, the acceptance letter was mailed to Mrs. Robin (deceased) and subsequently returned to sender, Ms. Lee reported what happened, "The envelope was returned to its sender and has since remained in the Chamber of Commerce's records." She also tweeted, "at first I didn't believe that Leo Robin's star had really slipped through the cracks" with a photo of that acceptance letter and the envelope stamped "RETURN TO SENDER." The Hollywood Chamber made no attempt to notify the co-sponsor, Bob Hope, who has four stars on the Walk. What the Hollywood Chamber did after the letter was (marked) "Return to Sender" was not customary practice but smacks of disregard for the individuals honored by the Walk of Fame Committee.

Leo Robin wrote the beautiful lyrics to the song "June in January," composed by Ralph Rainger, which was introduced by Bing Crosby in the 1934 film Here Is My Heart. The Crosby recording, made on November 9, 1934 with Georgie Stoll and his Orchestra, became a number #1 hit on Decca Records and has since has become a popular standard, recorded by the most celebrated jazz musicians such as saxophonist Benny Carter, guitarist Wes Montgomery and vocalists such as Dean Martin and Eydie Gormé. Bands and orchestras lead by Guy Lombardo, Nelson Riddle, Ferrante & Teicher and The Mormon Tabernacle Choir have also performed the song. 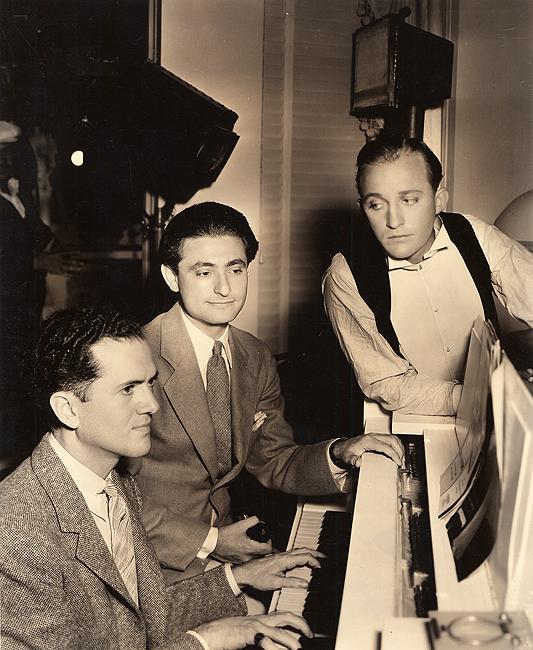 From right to left: Actor Bing Crosby with the famous Paramount songwriting team, Leo Robin and Ralph Rainger,
rehearsing their brand new songs -"It's June in January," "Love Is Just around the Corner" and "With Every Breath I Take" -
to be featured in his new film Here Is My Heart in 1934 and all three songs went on to become jazz standards

The award-winning Jazziz Magazine, known as "the voice of a new jazz culture, a culture it helped create," has earned a reputation as the undisputed authority on jazz and style over the past 35 years. This magazine made "June in January" its Song of the Day on January 31, 2019, saying, "We present it as today's Song of the Day as a reminder to our friends in frozen climes that warm weather will be here soon. In the meantime, this track is sure to keep things burning."

For more information, visit the Newsroom at the official website of Leo Robin at http://leorobin.com/.

Leo Robin Music manages the copyrights of songs written by Leo Robin, who was known as the "Dean of Lyric Writers." He created lyrics that have inspired popular music and become part of the fabric of our culture. Considered to be one of the most influential songwriters of the 20th Century, he wrote many of the country's most popular jazz standards including "Blue Hawaii," "Diamonds Are a Girl's Best Friend," "Easy Living," "If I Should Lose You," "My Ideal," "Prisoner of Love" and "Thanks for the Memory."