TORONTO, ON / ACCESSWIRE / January 14, 2021 / Chilean Metals Inc. ("Chilean Metals," "CMX" or the "Company") (TSXV:CMX)(SSE:CMX)(MILA:CMX) is pleased to announce it has received TSXV approval on its announced agreement to acquire 100% of the Golden Ivan property via a series of option payments and work commitments as further detailed below. Golden Ivan is located approximately 3 kilometers to the east of Stewart, BC in the heart of the Golden Triangle. The Golden Ivan property consists of 13 mineral claims, all in good standing, for a total area of approximately 797 hectares.

Chilean is to make cash payments totalling $150,000 to the Optionor, Granby Gold Inc., (the "Cash Payments") on or before the dates set out below:

Make stock payments via the issue of an aggregate of 11,400,000 Shares to the Optionor (the "Share Payments"), on or before the dates set out below:

All Share Payments are subject to a four month hold period from the date of the share issuance.

Chilean would be required to incur an aggregate of $1,800,000 of work expenditures on the Property on or before the dates set out below:

On performance of the Cash Payments and Share Payments noted above and completion of the work commitments Chilean Metals Inc. would acquire a 100% interest subject only to a 2.5% NSR royalty. Chilean retains the option to purchase 40% of this royalty for a one-time payment of $1,000,000.

Chilean has filed on SEDAR the "Technical Report on the Golden Ivan Property" with an effective date of December 6, 2020, prepared by Derrick Strickland, PGeo and Locke Goldsmith, PGeo, P.Eng. 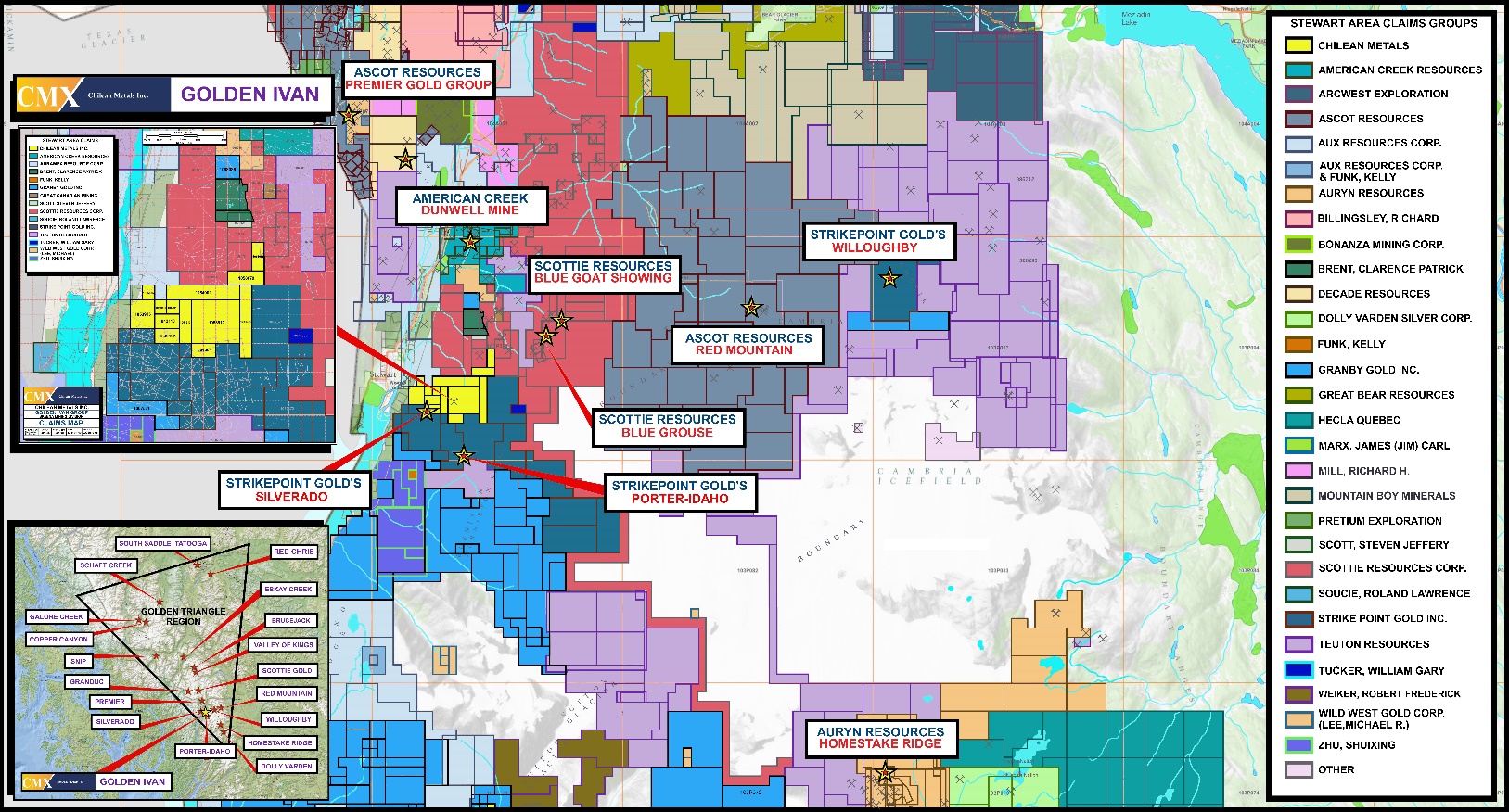 "Golden Ivan is a great acquisition for Chilean. The recent news from Ascot Resources regarding their now financed plans to build a mine within a few kilometers of our property is certainly a positive one for all property owners in the Southern part of the Triangle. Geographically Golden Ivan's location between StrikePoint's Silverado project to the south and Scottie Resources to the North on a under-explored and undrilled land package is certainly very interesting to us on a geological basis. The Geophysical work done by the Optionor makes us anxious to get in their next summer and drill those three Porphyry looking targets," commented Terry Lynch Chilean CEO.

The Company cautions that references to nearby properties is for information purposes only and there are no assurances that the Company will obtain similar results at the Golden Ivan property.

About the Golden Ivan Property

The Golden Ivan property is situated toward the south of British Columbia's prolific ‘Golden Triangle', which hosts numerous profitable mineral deposits and is known to be highly prospective for large scale mineral systems, including large-scale porphyry systems, high-grade gold and silver veins, and volcanogenic massive sulfides. The Golden Triangle is host to numerous past and current mining operations and has reported mineral resources that total up to 67 million oz of gold, 569 million oz of silver, and 27 billion pounds of copper. Recent mineral development activity within the local area includes Ascot Resources' recently funded Premier Gold mine (2.3 Million oz gold), which has received $105 million in project construction financing for the development of renewed operations at the historic exploited Premier Gold deposit. Other notable active projects in the local area include the neighboring Silverado project, and Red Mountain, and Homestake projects amongst many others. Further to the north Pretivm's Bruce Jack mine (4.2 million oz gold), and the neighboring KSM and Eskay deposits also have significant gold, silver, and copper resources that are yet to be realized.

Physiography and Access: The property covers dominantly high alpine areas situated between Mt Rainy and Mt Maggie and is located adjacent to the Cambria Icefield. Several small glaciers occur on the property, which is otherwise typified by rock outcrop and glacial debris, with forested areas at lower elevations toward the west. The property is accessible by Helicopter from the town of Stewart, and is amenable to seasonal exploration from June onwards. Stewart has deep seaport access, road access, and is a regional hub for mineral exploration services.

Capsulate Geology: Based on the limited publicly available information; the property is located within Stikine Terrane (Stikinia) of the Canadian Cordillera, and is underlain by felsic to intermediate volcanogenic sediments of the Jurassic Hazelton Group, which are unconformably overlain by Bowser Basin sediments. The property is understood to be situated over steeply dipping overturned sediments within the Mt Rainy syncline, and is located adjacent to a significant E-W fault (the Silverado fault) located toward the south of the property. The local area additionally hosts several intrusive complexes of the Coast Crystalline Belt; including Hyder and Glacier creek plutons. Numerous dykes are reported to cross the property in a general northwest direction.

Previous Work: The property hosts two (2) known mineral showings (Gold Ore, and Magee), and a portion of the past-producing Silverado Mine, which was reportedly exploited between 1921 and 1939. These mineral showings are described to be Polymetallic veins that contain quantities of Silver, Lead, Zinc +/- Gold +/- Copper. Numerous additional mineral occurrences, showings and past procuring mines are located in the immediate areas surrounding the property, further supporting the presence of widespread mineralization in the areas.

The property is relatively under-explored. Work that was completed by previous operators from the 1980's to 2011, included prospecting, limited geochemical sampling, some ground-based geophysics surveys; limited sampling from the historical workings at the Silverado Mine was also performed.

In 2018 Precision Geophysics completed an 88-line kilometer combined magnetic and gamma-ray spectrometry survey on behalf of the vendor Granby Gold Inc. Standard magnetic and radiometric data products were prepared and additional interpolate structural analyses were performed on the collected data. A number of areas of coincident magnetic and radiometric anomalism have been identified, additionally ‘structurally prepared' zones are identified from the structural analysis interpolates. Such characteristics are widely regarded as favorable indicators of widespread hydrothermal alteration aka Porphyries, and may likely aid in vectoring toward any causative source intrusions that may be located on the property. Three preliminary target areas of merit are established as a result of the survey and will be the focus of initial explorations at the site.

Future Exploration: The Company intends to focus future exploration efforts to determine the potential causative source intrusions of the mineralization observed across the property, and surrounding areas. The initial phase of exploration is anticipated to include systematic geological and structural and alteration mapping, as well as geochemical sampling across the property to determine any local areas of anomalism. This would be followed by ground-based geophysics to confirm local structural trends prior to proceeding with an initial drill program in the summer/fall of 2021.

CMX would also like to announce it has entered into an advisory agreement with Mackie Research Capital Corp. to assist the Company with various business development opportunities it is reviewing. As compensation for this service Mackie will receive 350,000 options at $0.315 from the Company's option plan. These options are exercisable for a period of 2 years.

Chilean Metals Inc is 100% owner of five properties comprising over 50,000 acres strategically located in the prolific IOCG ("Iron oxide-copper-gold") belt of northern Chile. It also owns a 3% NSR royalty interest on any future production from the Copaquire Cu-Mo deposit, recently sold to a subsidiary of Teck Resources Inc. ("Teck"). Under the terms of the sale agreement, Teck has the right to acquire one-third of the 3% NSR for $3 million dollars at any time. The Copaquire property borders Teck's producing Quebrada Blanca copper mine in Chile's First Region.

Chilean Metals has announced subject to TSXV approval acquisition of the Golden Ivan project in the heart of the Golden Triangle. https://chileanmetals.com/press-releases/ The Golden Triangle has reported mineral resources (past production and current resources) in total of 67 million oz of gold, 569 million oz of silver, and 27 billion pounds of copper. This property hosts two (2) known mineral showings (Gold Ore, and Magee), and a portion of the past-producing Silverado Mine, which was reportedly exploited between 1921 and 1939. These mineral showings are described to be Polymetallic veins that contain quantities of Silver, Lead, Zinc +/- Gold +/- Copper.

Chilean Metals has announced subject to TSXV approval acquisition of up to 80% of the NISK Nickel Copper PGE Deposit located in the James Bay area.