If you’re looking for penny stocks for your watch list right now, do you know where to start? Assuming you know that penny stocks are defined as shares trading for less than $5, price is usually a place to begin. But where do you go after that? There are thousands of stocks under $5 to search from and it might seem daunting to boil that down to just a handful. However, observing market trends and analyzing information can be a big help.

Lucky for you, PennyStocks.com is here to help. Something that we’ve found is that small cap stocks are on fire right now. In fact, among major benchmarks like the S&P (SPY), Nasdaq (QQQ), and Russell 2000 (IWM), small-cap stocks – IE the Russell – are far outpacing other segments of the market. Both the SPY and QQQ are trading sideways this week attempting to weather a storm of economic data, stimulus uncertainty, and jobless claims.

Meanwhile, the IWM just made a fresh high. Are you still searching for hot penny stocks? Let’s take a look at some of the hot industries right now. Of course, technology remains in the top 5 but based on the Tech ETF (XLK), it too is trading sideways just as the QQQ & SPY. Do you know what isn’t? The NASDAQ Biotech ETF (IBB). In fact, it just reached new highs of its own, this week. Since we know small-cap stocks are hot and biotech stocks are as well, it might make sense to follow some smaller biotech penny stocks this month. Taking this into consideration, here are 4 top penny stocks to watch if you’re looking for biotech stocks right now

Shares of Havn Life Sciences (HAVLF Stock Report) have seen a wild month of December so far. However, compared to many of the other magic mushroom stocks, HAVLF has managed to maintain a relatively consistent level of support for the last week or so. In comparison, some of the other active psychedelic stocks are trading in a much wider range. Regardless of why that may be, Havn has become a point of focus for many looking at the early evolution of psychedelics right now. Some have even compared this niche to what the early days of cannabis looked like back in 2014.

What’s more, is that some of the key players during the early cannabis boom are now getting involved in magic mushroom and psychedelic stocks. In fact, Havn’s Executive Chairman is Vic Neufeld. He was the cornerstone to building an early foothold in legal cannabis as the CEO of Aphria between 2014 and 2019. Now Neufeld is getting into psychedelics and grabbed his seat at the table of Havn.

In addition, 2021 has gotten its own spotlight as far as Havn is concerned. In particular, the company is ramping up for the launch of its first line of nutraceutical mushroom products in Canada. This week, the company announced a product listing agreement for product sales in select Nesters Markets in British Columbia. “This is a major milestone for Havn Retail, enabling us to reach our goal of launching our initial product line in the market for early 2021,” said Tim Moore, CEO of Havn Life. In addition, Havn has also begun investigating standardized extraction methods of psychoactive compounds. For more info on the “magic” side of Havn’s magic mushroom model, click here. 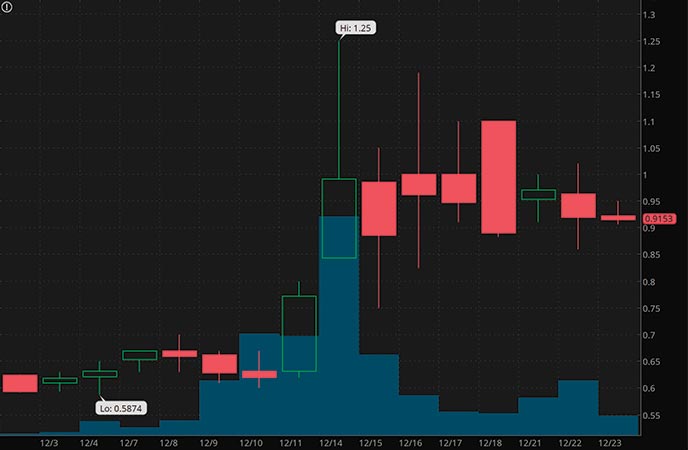 Mustang Bio Inc. (MBIO Stock Report) is another one of the biotech penny stocks to watch right now. In fact, it has been on and off of our list for months. Before we discuss some fundamentals, let’s look at the technicals. I think that the MBIO stock chart deserves some attention. In particular, take a look at key resistance points over the last few months. Each time MBIO tested price levels around $4, the stock failed to break higher and ended up pulling back. However, this month, you might notice something a bit different. That comes in the form of the penny stock’s daily trading volumes.

In September and early December, there wasn’t nearly the same level of activity in the stock. What has triggered such momentum recently? First, we’ve seen some insider buying over the last few weeks. Most recently, Director Lindsay Rosenwald and Manuel Litchman picked up 200,000 combined between December 14th and 15th. On top of this, the company along with research firm, City of Hope announced the formal launch of a Phase 1 clinical trial. It will look to establish the safety and feasibility of administering MB-101 to patients with leptomeningeal brain tumors.

Thanks to this and other key developments, analysts have become more bullish. B. Riley reiterated its Buy rating on the penny stock. Furthermore, the firm previously boosted its $9 price target to $13 a few weeks back. Considering industry strength in small-cap biotech stocks, will MBIO hit your watch list before 2021? 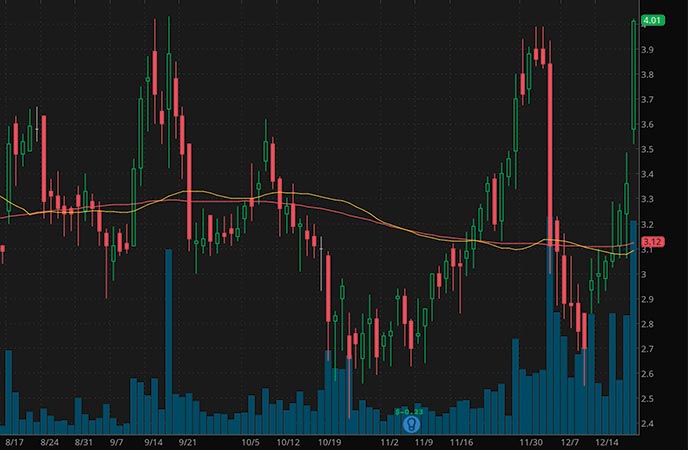 When we talk about stocks under $5, you can’t ignore the potential of certain penny stocks under $1. A very basic perspective on these types of stocks simply takes into consideration that even a 2 cent move can equate to bigger gain percentages. Now, not all penny stocks under $1 will skyrocket and many will move down just as fast as they move up. But it does make for some exciting sessions in the meantime. Avinger Inc. (AVGR Stock Report) is one of these stocks under $1. It’s also one of the biotech stocks to watch right now.

One of the main reasons is that its Annual Shareholder Meeting is set to reconvene today. The company is pushing for its shareholders to approve a reverse stock split of the company’s common shares to ensure its Nasdaq listing requirements are met.

“We believe a Nasdaq listing is critical for our stockholders. While we understand that a potential reverse stock split is a difficult matter, we believe it is in our shareholders’ best interest to have all options available to maintain our listing. Avinger has a well-funded balance sheet, with capital to cover our 2021 growth plans, a critical difference from our prior circumstances.”

Aside from this, the company has also made more progress toward its Tigereye product launch. Avinger has designed an intravascular image-guided, catheter-based system called Tigereye™. Following clearance by the FDA, Avinger has begun rolling out this product and expects to expand commercial availability of Tigereye for U.S. national launch in next month. 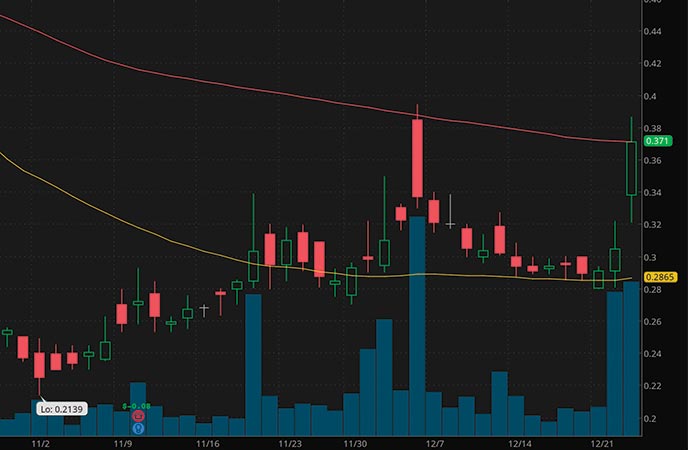 Atossa Therapeutics (ATOS Stock Report) is another one of the biotech penny stocks that have seen a strong boost in daily trading action this month. Following the pricing of an upsized offering, ATOS stock dropped hard. Since then, however, shares have begun steadily firming up a new support level, albeit lower, around $0.80. With the last funding round closed earlier this week, it seems to have triggered a vote of support from traders. Something important to note is the details of the funding and use of proceeds. It’s never fun seeing a company report a discounted offering for obvious reasons. But once the company arms itself with fresh capital, what’s next?

In this case, Atossa cited that it would use proceeds for “funding our ongoing and future development of our drugs and devices under development” among other things. One of the main points of interest lately has been on Atossa’s development of AT-301. This is the company’s nasal spray as potential at-home treatment against COVID-19.

“Our COVID-19 nasal spray program has progressed very well during the quarter, with our Phase 1 study of AT-301 nasal spray demonstrating good safety and tolerability at two different dose levels in both single and multiple dose forms over a 14-day trial period,” said Dr. Steven Quay, Atossa’s President and Chief Executive Officer.

The preliminary results have brought confidence enough for the company to plan on filing a pre-IND meeting with the FDA. If the outcome is favorable then Atossa said it plans to begin a Phase 2 study. 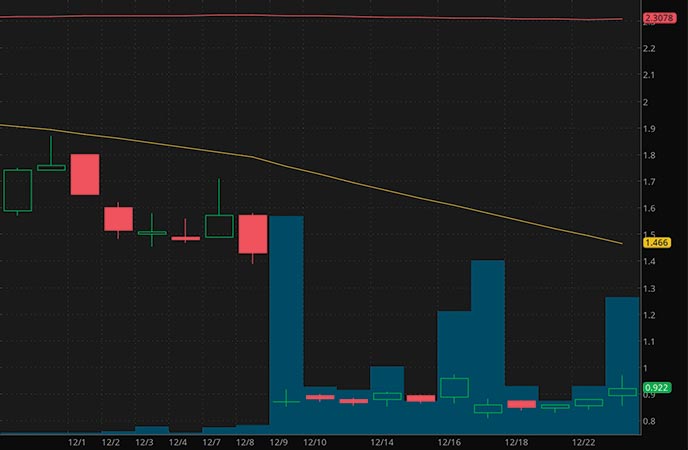