Should Investors Buy Epicenter Stocks This Week Amid Moderna’s EUA?

When you are looking for the best stocks to buy in the stock market today, some of the best investments can be found in epicenter stocks. So, you might ask, what exactly are epicenter stocks? Originally popularized by Fundstrat’s Tom Lee, epicenter stocks are those which have been beaten down the most by coronavirus pandemic. They are also the ones that could become the fastest to recover in light of an economic reopening.

Pfizer (PFE Stock Report) and BioNTech (BNTX Stock Report) were the first to receive the FDA’s emergency use authorization (EUA). Over the weekend, Moderna (MRNA Stock Report) also received the EUA for its vaccines. In fact, the vaccines began leaving warehouses for distribution early Sunday. One thing to take note of is that Moderna’s vaccine does not require ultra-cold storage and transportation temperatures. This makes it easier than Pfizer’s vaccine to be supplied to rural and remote areas. With this in mind, investors could be looking for top epicenter stocks to watch as we start the week.

Could Epicenter Stocks Be The Center Of Attention This Week?

With the vaccine news over the weekend, what could it mean for top epicenter stocks? Recall when Pfizer received the EUA, these slight glimmers of hope sent the top epicenter stocks flying, including Pfizer stock itself. But the rally seems to have fallen to the wayside after patients with allergies are reporting strong side effects. Now, with Moderna’s vaccine on its way to the broader population, would you prepare a list of the best epicenter stocks to buy before 2021?

Many of the travel names might spike from time to time over this piece of news. But the truth is, many of these companies that were brought down to their knees are still finding it hard to gain a solid footing. The reason is that many of these companies are still burdened by excessive cash burns and lower sales due to restrictions imposed by the novel coronavirus. But this isn’t to say that you should ignore this trend, really. As the world moves forward with renewed vigor and hope, investors could also be making moves with this type of stock. The reason is that they have lost much of their market cap during the March lows. With all things considered, here are the three top epicenter stocks for you to watch this week.

First, up the list, Southwest Airlines (LUV Stock Report) is worth the attention among potential airline stock investors. LUV stock is only down around 16% year to date. That’s quite impressive considering that some of its rivals saw their value slashed by half. The budget airline has been making headlines by announcing potential new markets, while its competitors have been cutting down flying routes and frequencies.

While this allows the airline to flex its financial capacity, the impact of COVID-19 is felt across the sector. Earlier this year, Southwest was desperate to get the Boeing (BA Stock Report) 737 Max back in its fleet as soon as possible. However, as air travel fails to recover with the surging coronavirus cases, the company quickly reduced its near-term aircraft deliveries. In addition, its sale and leaseback arrangement for 20 planes in May this year helped raise $815 million, an astute move by the company. 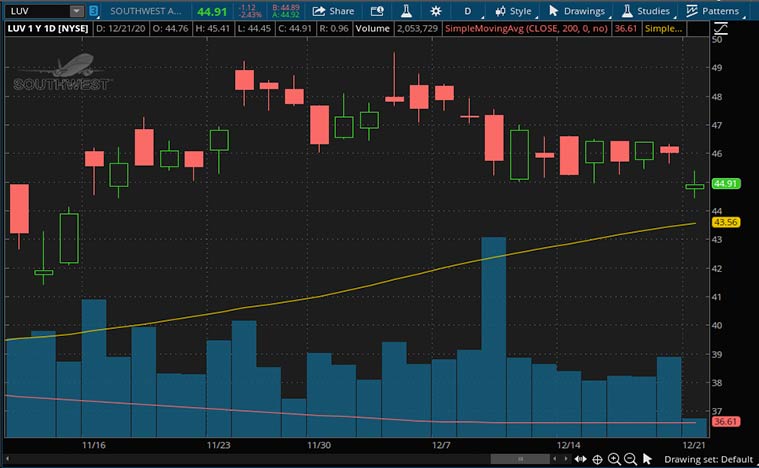 Investors like Southwest because its liquidity profile is second to none in the industry at a net cash position. It is able to take advantage of any discounts Boeing might offer to secure the planes. Of course, any expansion involves risk. Although the airline may be a discounter, Southwest’s cost structure is somewhat higher than a number of low-cost rivals. Nevertheless, the airline appears to be taking advantage of its balance sheet to capture a larger market share in the U.S. aviation market. This is while the other major players continue to cut down their spending to protect themselves from bankruptcy threats. And that is good news for LUV stock investors.

You can’t talk about epicenter stocks without mentioning hospitality and, more specifically, casinos & resorts. Wynn Resorts (WYNN Stock Report) shares treaded water for most of the past eight months. However, since mid-November, things have been a bit more active. Since the market sell-off in March, shares are up nearly 170%. And while there’s still much more to recover from that drop, the nine-month window hasn’t looked bad for the stock.

During the second quarter of the year, the company implemented a number of measures to preserve its cash. These include reducing capital expenses, cutting administrative expenses, and suspending dividends. From its third quarter filings, Wynn reported $3.5 billion of available liquidity. That can support operating losses for more than a year. Therefore, it does seem that the stock is in a good position to return to pre-crisis levels now that vaccines are beginning to roll out. 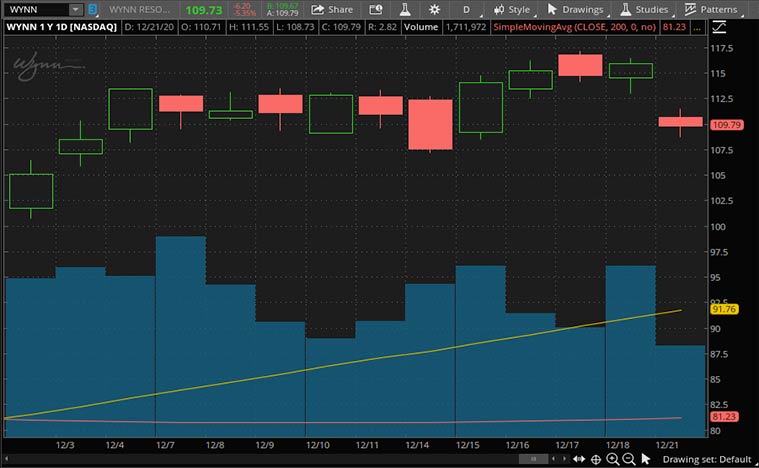 Wynn operates several luxury resorts including Wynn Las Vegas, Encore Las Vegas, Wynn Macau, and Encore Macau. While Macau gaming revenues dropped in November, most casino stocks have traded higher. Even new capacity restrictions haven’t put much of a blemish on casino stocks like Wynn in light of recent vaccine headlines. If optimism remains and eventually results in looser restrictions, WYNN stock could be one top epicenter stock to watch.

Walt Disney (DIS Stock Report) is an epicenter stock worth a closer look. Sure, with social distancing restrictions in place, the company lost several sources of revenue. Two notable ones would be its box office revenue from movie releases and Disneyland theme park/resort revenue. But that’s not the main point. Recall that Disney restructured its media and entertainment divisions, with streaming becoming the most important facet of the company’s media business. Recently, Disney unveiled Star, a huge cache of content, signaling that it intends to dominate both streaming and theaters. Star is a free tier within Disney+ for subscribers in Europe, Canada, and New Zealand that will be fully integrated into the streaming platform.

The company has seen steady growth in the months since the COVID-19 pandemic hit. The knockout success with its Disney+ is what’s behind this. Disney CEO Bob Chapek first talked about Star earlier in August, announcing plans to launch an international streaming service that is similar to Hulu. “In terms of the general entertainment offering internationally, we want to mirror our successful Disney Plus strategy by using our Disney Plus technical platform, bringing in the content we already own and distributing it under a successful international brand that we also already own, which is, of course, Star,” Chapek told analysts at the time. 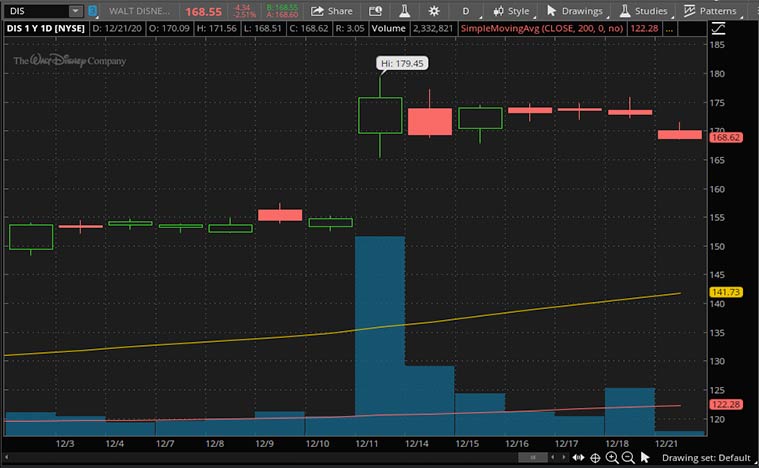 Of course, now that two vaccines are being rolled out across the U.S., Disney’s theme parks could see a return in traffic. Similarly, its cruise lines could be ready to sail again. In the previous quarter, Disney still reported a loss. The share price has now broken even year to date. With a growing streaming business and recovery in other segments, could this be a great opportunity to buy DIS stock?