By: Penny Stocks to Buy, Picks, News and Information | PennyStocks.com - Feed
Are These ON Your List Of Penny Stocks To Watch Right Now?

Whether you’re looking for penny stocks to buy or just a few to watch, it’s important to keep your trading strategy in mind. With the way that the market has been trading, there’s a lot of bullish exuberance floating around. While this, alone, isn’t a concern, necessarily, what it can amount to is. Countless times in the past year, we’ve seen caution thrown to the wind in exchange for emotionally driven trading action. This is especially true when it comes to stocks under $5. This is the basic definition of penny stocks and traders sometimes forget about the higher risks involved.

I’m not just talking about dilution risk or headline risk. Price is a risk itself. The lower the price, the higher the chances of increased volatility. Depending on the specific penny stock, even a move of just a few pennies can equate to big shifts in position value. Needless to say, the search is always on for the best penny stocks to buy now.

Furthermore, if you’re looking for these penny stocks on Robinhood or Webull, for instance, cheaper stocks may actually be inaccessible. That’s because those platforms restrict access to most OTC penny stocks. Considering the fact that the NASDAQ and NYSE have minimum price requirements, finding penny stocks under $1 might be a difficult task. There are, however, plenty of stocks under $1 and even under 10 cents that other brokers allow access to. Keep this in mind if you’re someone who’s looking for these cheap stocks right now. What are some of the best penny stocks to watch today under $1? Give these names a glance.

With the advent of the “mushroom boom,” traders and consumers alike are hunting for mushrooms. To put it a bit more eloquently, psychedelics have become a new topic of discussion when it comes to mental health and wellbeing. The latest election results have now sealed the fate of places like Oregon, which is now choosing to legalize things like psilocybin. Even New Jersey has begun loosening restrictions on psychedelic compounds. This progressive move forward has opened the door for something similar to what we saw during the early days of cannabis legalization. A medical-first focus followed by a recreational use case has already begun materializing.

Havn Life Sciences (HAVLF Stock Report) has stepped into the ring, standing toe-to-toe with the likes of Peter Thiel-backed Compass Pathways (CMPS Stock Report) and others. While companies like Compass and MindMed have attracted unique investors, Havn has focused on internal strength. Not only does its CEO Tim Moore have a history of building billion-dollar businesses, the company’s Executive Chairman, Vic Neufeld, founded one of the Big 4 cannabis companies that started the pot stock boom.

What To Watch With Havn Life Sciences

Neufeld was CEO of Aphria Inc. (APHA Stock Report). During his time at the company, he played an integral role in the rampant growth of the company. In fact, during his time at Aphria, Neufeld helped build the company from a penny stock into one trading above $19, while also managed to gain approval to list on a major exchange.

Aside from its Havn has already begun supplying companies with psychedelic compounds. In October of 2020, the company inked a deal with Revive Therapeutics Ltd. supplying the company with psychedelics for use in its investigational new drug enabling studies and future clinical trials under the FDA guidelines. Most recently, the company announced the initial 7 natural health supplements set to launch in 2021. Based on plant extracts and mushrooms, these products are targeted to deliver health and wellness support. 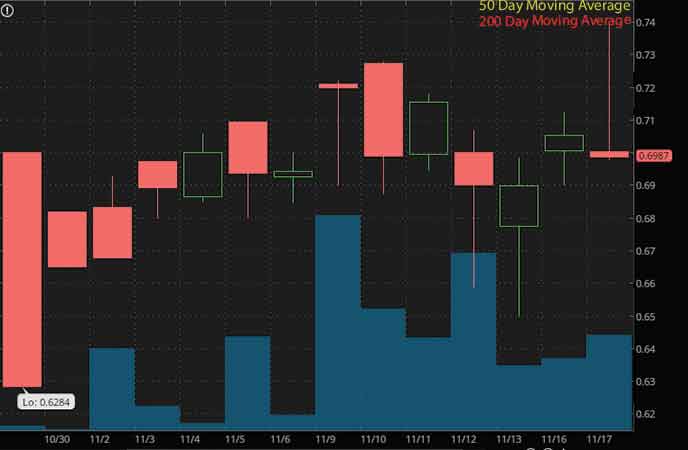 Zomedica Corp. (ZOM Stock Report) remains one of the hot penny stocks to watch this week. We discussed the company on Monday as trading volumes picked up. The move was a continuation of what ZOM stock had experienced for most of November. Since the start of the month, shares have managed to climb from around $0.07 to highs this wee of around $0.15. This massive surge didn’t come without its own series of catalysts either.

While most of the month was quiet, the bigger surge began after Zomedica released its earnings results late last week. The company saw EPS growth year-over-year posting a loss per share of $0.01 compared to a loss of $0.03 per share from a year prior. The company also announced an official date that it would begin commercializing its TRUFORMA point-of-care diagnostic platform.

What To Watch With Zomedica

Zomedica has been a highly volatile penny stock. The company has also been known to raise large sums of money, which has put pressure on ZOM stock in the past. However, right now momentum has remained strong in light of a long-awaited commercialization of this TRUFORMA platform. it’s designed to provide point-of-care diagnostics for animals.

Zomedica has five initial assays under development, comprising two panels – one each to detect thyroid and adrenal disease. The Company has completed verification for canine and feline TSH, canine and feline tT4, canine fT4 and canine cortisol assays, and validation efforts are underway for all of these assays.

With the date set for late March, traders seem to have become a bit more bullish on the penny stock. It also looks like analysts are also paying attention. Right now, HC Wainwright has a Buy rating on the stock and recently adjusted its price target to $0.30. 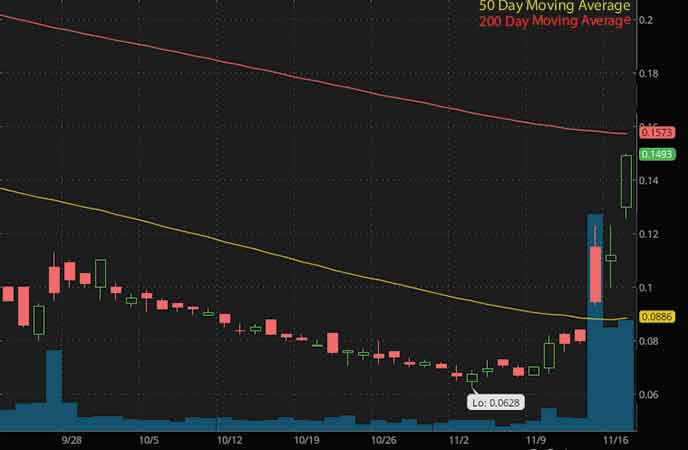 9 Meters Biopharma (NMTR Stock Report) is another one of the penny stocks under $1 to watch this week. The company has been on our watch list since mid-August. At that time NMTR stock was trading around $0.60, it ended up quickly breaking out to over $1 and after settling back around its 50 Day Moving average, it has been on the rise since. The penny stock spiked after 9 Meters released its Q2 results. Furthermore, insiders began buying shares of the company too. Director Mark Sirgo had purchased 100,000 shares just a few days later.

What to Watch With 9 Meters

Fast-forward to this month and there’s a laundry list of analysts now covering the stock. There’s also been several milestones reached by the company itself. Most notably, this includes yet another strong earnings release in Q3. The company saw year-over-year growth in earnings per share. The company also released new information on the timing & progress of its celiac disease and short bowel syndrome trials. With the latter, the company expects to share results before the end of the year. In its celiac disease trial, 9 Meters expects topline results in the second half of 2021.

This week the company announced preliminary results from a collaboration with Gustave Roussy, Villejuif, France, which was a 14 month research project started last year. The project used the company’s NM-102 treatment, which showed positive efficacy in aggressive immune checkpoint inhibitor failure melanoma. Based on this, the company intends to move forward with an IND-enabling pathway to further develop NM-102. 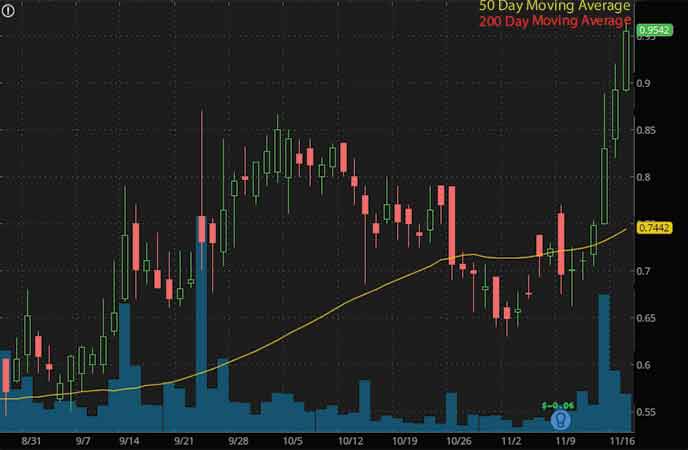 Gulfport Energy Corp. (GPOR Stock Chart) has been battling heavy selling pressure this month. On Monday, the penny stock hit a new 52-week low of $0.12 on heavy volume. One of the bigger points of interest for traders following this company is Gulfport’s restructuring strategy. The company began a voluntary Chapter 11 process to implement this plan.

It also obtained a commitment for over $100 million in new money debtor-in-possession financing to support operations. While there could be a long road ahead for GPOR and plenty of risks involved, the short term momentum is what traders are watching this week. Shares have managed to bounce back roughly 25% from a 3 cent move between Monday and Tuesday.

What To Watch With Gulfport Energy

Obviously, Chapter 11 poses a huge risk for those looking at a company like this in the long-term. However, as we’ve seen from other bankruptcy stocks like Hertz and Tuesday Morning, short term breakouts aren’t an unusual sight to see. This week, the company announced that it received court approval for first-day motions to support ongoing operations. The court also authorized the company to borrow up to $90 million in debtor-in-possession funds.

Gulfport is one of the largest producers of natural gas in the contiguous United States. The company holds significant acreage positions in the Utica Shale of Eastern Ohio and the SCOOP Woodford and SCOOP Springer plays in Oklahoma. 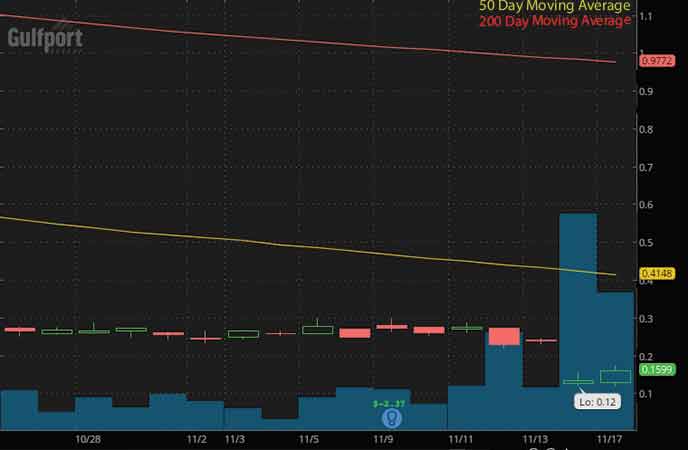