Making A List Of Penny Stocks? 5 Stay At Home Stocks To Watch

Penny stocks have become very popular during the past 10.5 months. With Covid on the rise once again, we are already seeing certain tightening as it pertains to stay-at-home measures. With that in mind, there are a few areas of the market that investors have been focused on.

As far as stay at home stocks go, investors have been focused on eLearning penny stocks, food delivery penny stocks, energy stocks, and even tech penny stocks. These areas of interest are just a few in a much broader speculative environment. As always, investors should make sure to do independent research to find a penny stock that is right for them. This includes finding information about volatility, liquidity, a company’s financials and what it is planning to do in the future to remain competitive.

The last one is quite important as the competition is high among penny stocks. This means that companies need to continue innovating in order to stay at the top. As always, financials are extremely important as well. Investors should know all they can about a given penny stock before adding it to their watchlist. With that in mind, let’s take a look at 5 stay-at-home penny stocks to watch for potential momentum.

Boxlight Corp. is a part of the eLearning industry which as you may know, has seen renewed popularity with the rise of Covid. With more people than ever utilizing eLearning solutions, Boxlight Corp. has grown substantially in popularity. Rising Covid numbers around the U.S. mean that several areas could go into lockdown once again. This includes NYC as well as Chicago and the state of Wisconsin. While these are just a few areas that are proposing some restrictions, analysts expect more areas in the U.S. could follow suit.

The company states that it is the leading provider of interactive tech products that are sold through its subsidiaries. These subsidiaries include Clevertouch, Mimio, and Sedao. The company is expected to host its Q3 earnings call on November 16th after hours. On November 12th, shares of BOXL stock shot up by almost 13% during intraday trading. Since the end of October, shares are up by over 20% and YTD by 40%. As we can see, the momentum here is being driven heavily by speculation. With cases rising once again around the world, investors can decide whether BOXL stock is right for them. 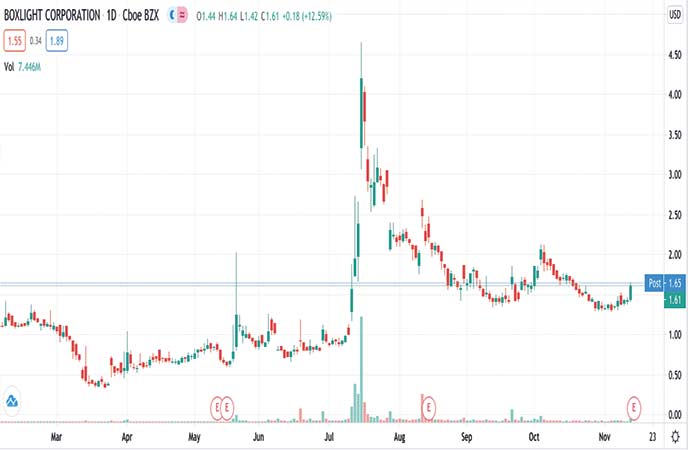 Waitr Holdings Inc. is another stay at home stock to watch that shot up on November 12th. During the trading day, shares of WTRH stock shot up by 15% by EOD and into after hours. The company states that it works in the tech industry by providing online food ordering and delivery services. It utilizes both its Waitr Platform as well as Bite Squad to allow consumers to purchase and have food delivered. At the end of last year, the company stated that it had as many as 18,000 restaurant partners in more than 640 cities.

[Read More] What Are Good Penny Stocks To Buy Right Now? 4 For Your Watch List?

On November 9th, Waitr Holdings announced its third-quarter 2020 results. In the report, the company stated that revenue came in at $52.7 million, up 7% over the same quarter of the previous year. In addition, net income totaled at around $4.6 million. This may seem small but when we compare it to Q3 2020’s loss of $220 million, it becomes a different story.

In Q3, the company also reported an adjusted EBITDA of $13 million with more than $80 million in cash on hand. Carl Grimstad, CEO of Waitr stated that “we achieved a second consecutive quarter of continued profitability and operating cash flow, which we believe is the result of our fundamental strategic initiatives and focus on operating a profitable business.”

With these exciting results in hand, Waitr Holdings continues to be an interesting lockdown penny stock to watch. 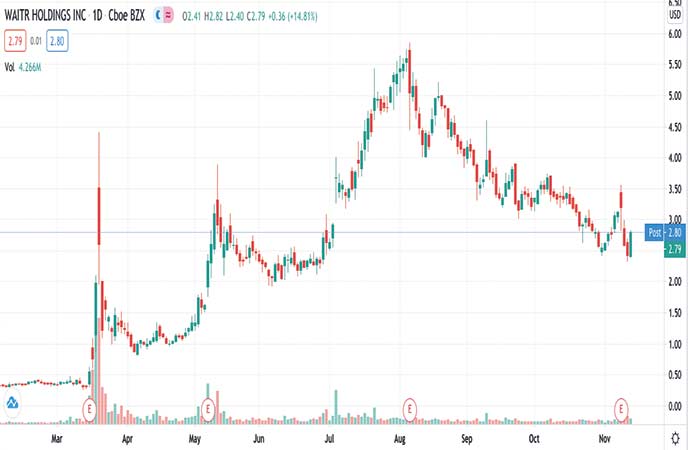 AgEagle Aerial Systems Inc. is a U.S. based provider of commercial drone technology and services. The company states that it provides all of the necessary tools for its users to utilize drone products and softwares. AgEagle Aerial Systems has been working on a three part plan in order to achieve growth.

The first part of the plan is contract manufacturing. With its commercially focused drones, the company has been able to secure various contracts for its products. The second part of its growth strategy is offering drone solutions to customers. This involves producing ready-made products that can solve drone needs in both industrial and governmental applications. Lastly, the company states that it is working to build upon its agricultural consumer base. With this, it is improving its software and data analytics to better suit agricultural customers.

Recently, the company announced that it has been selected as an industry partner for the U.S. DOT’s Unmanned Aircraft System Integration Pilot Program as well as the BEYOND program. CTO Michael Kratsios stated that “the IPP propelled the American drone industry forward, allowing for unprecedented expansions in testing and operations.”

YTD, shares of UAVS stock are up by a staggering 488%. With the hopes of more forward momentum, AgEagle Aerial Systems continues to tout itself as being a stay at home penny stock to watch. With speculation rising about drone-delivered packages, UAVS could be one of the penny stocks to watch. 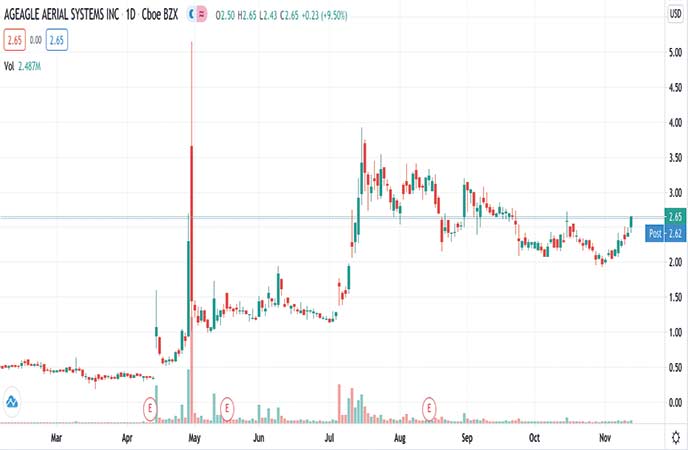 Clean Energy Fuels Corp. is another big Thursday November 11th gainer, pushing up by more than 17% by EOD. In the past six months, shares of CLNE stock are up by as much as 72%. So, you might be wondering why the big rise in value? Well in the past few months, the focus on clean energy has been growing substantially. Recently, the idea that Joe Biden could become President has shown that the U.S. may move toward becoming a clean energy country within the next several decades.

[Read More] Can You Make Money With Penny Stocks? 4 That Analysts Say ‘Buy’

In a report released recently, CEO of Clean Energy Fuels Corp. Andrew Littlefair stated that “we continue to leverage our strong position as the leader in alternative fueling, working with our customers to support their operations, which are vital in keeping the country running smoothly. We delivered almost 98 million gallons in the third quarter of this year versus 103 million in the same quarter last year.”

The company’s target markets include heavy-duty trucking, airports, public transit, institutional energy users, and government fleets. With that, even during a stay-at-home order, commercial transit remains important. The company stated that during its third quarter of this year, its EBITDA grew by 18% over Q3 2019 to $11 million. In addition, the company reports that it has $92 million in free cash and investments with only $35 million in debt. With clean energy being the way of the future, could CLNE stock continue experiencing bullish sentiment? 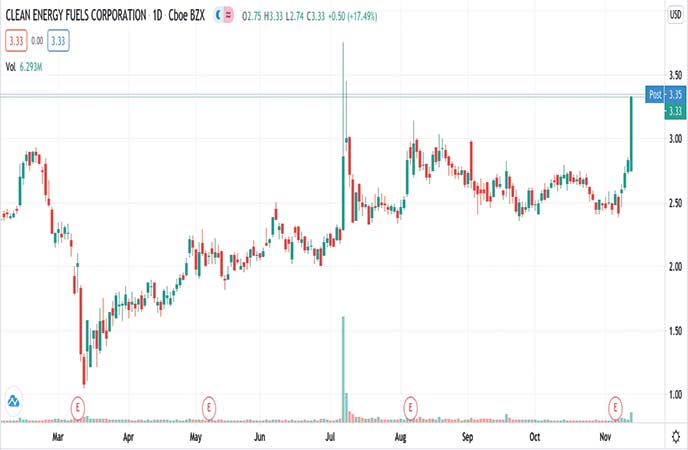 This may not be your traditional stay at home stock but Marathon Patent Group could be benefiting from a growing trend we’re seeing in the market. That trend in a resurgence in excitement about Bitcoin. In fact, while more stimulus measures are expected, some are flocking to “safe havens 2.0”. Where gold, silver, and other precious metals have been thought of as safe havens in the past, certain digital currencies are now sought for the same reasons.

“Frankly, if the gold bet works the bitcoin bet will probably work better because it’s thinner, more illiquid, and has a lot more beta to it.”

Marathon Patent Group falls into this category as the company focuses on cryptocurrency mining. MARA stock may have experienced a bit of “sell the news” on Thursday after reporting its latest earnings results. Sales more than doubled year over year to $835.18k. However, earnings per share took a much larger hit coming in at a loss per share of 28 cents. Last year, this figure was a loss of 12 cents per share. But expectations are high for 2021 as the company has focused on increasing capacity over the last few months.

“By the end of the 2nd quarter in 2021, we will have 23,560 miners deployed which equates to a greater than 1100% increase in mining capacity. At current Bitcoin prices, our deployment of new miners has the potential to produce more than an 11 fold increase in our monthly revenue as compared to our September 2020 revenue production,” said Merrick Okamoto, Chief Executive Officer. 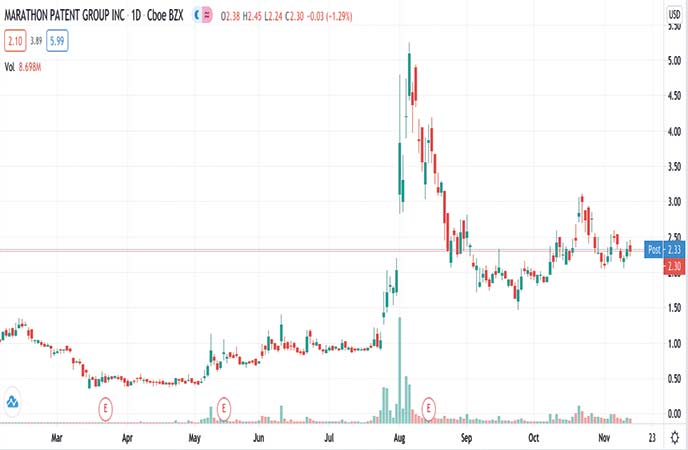