By: StockNews.com
KLA’s (KLAC) recently-released quarterly results reflect strong revenue and cash flow across its segments, as a result of rapid digitalization and technological advancements under the “new normal.” The highly anticipated 5G boom should fuel KLAC’s growth momentum even further in the upcoming months.

KLA Corporation (KLAC) is a global technology leader providing cutting-edge technology for process control and management solutions for nanotech electronics and semiconductors. It manufactures devices with integrated defect inspection tools, metrology systems, and computational analytics, and has a market presence across 19 countries. 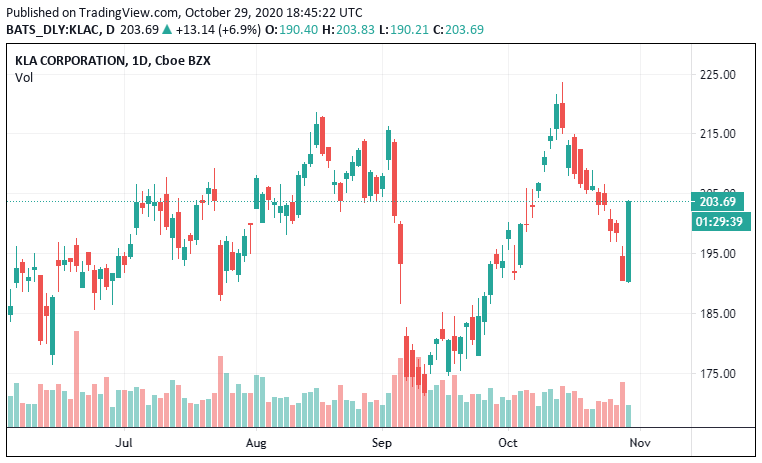 KLAC recently reported strong fiscal first-quarter financials. Total revenue increased 9% year-over-year to $1.54 billion. This can be attributed to the company’s broad and diversified strength across each of its segments. The Semiconductor Process control segment reported revenue of $1268 million in the quarter, up 9% year-over-year. KLAC’s EPS increased 22.2% year-over-year and 11% sequentially to $3.03 million, surpassing the consensus estimate by 9.4%.

The chip-gear maker has been able to capitalize on the rapid digitalization and the surge in demand for cloud applications under the “new normal” of working and learning from home. The stock gained 63.8% since hitting its 52-week low in March. This impressive performance and the potential upside based on several factors have helped the stock earn a “Buy” rating in our proprietary rating system.

Here is how our proprietary POWR Ratings system evaluates KLAC:

For the fiscal first quarter ended in September 2020, revenues from China increased by 32% year-over-year, contributing significantly to the company’s total revenue. Except for Patterning, all other products reported positive growth with Wafer Inspection reporting a revenue increase of 16% year-over-year to $520 million. Free cash flow (FCF) increased by nearly 11% sequentially to $456 million over this period.

In terms of proximity to its 52-week high, which is a key factor that our Buy & Hold Grade takes into account, KLAC’s positioning looks slightly unfavorable. The stock is currently trading 17.3% below its 52-week high of $223.54, which it hit on October 14th.

The company invested $2.5 billion in Research and Development (R & D) over the last four years. KLAC’s strong liquidity position allowed it to increase dividends periodically since 2006. The dividend payouts increased at a CAGR of 15% over the last fourteen years.

The Semiconductor & Wireless Chip industry is ranked #3 out of the 123 StockNews.com industries. This industry working behind the scenes for the technological advancements has been enabling advances in communications, computing, healthcare, transportation, and countless other applications. As the race for 5G is ramping up, this industry has been witnessing surging demand to upgrade the existing infrastructure around the world.

KLAC is rated “Buy” due to its impressive financial performance, solid growth prospects, and underlying industry strength, as determined by the four components of our overall POWR Rating.

KLAC has the potential to soar in the upcoming months despite gaining 7% so far this year, based on its continued business growth, favorable earnings and revenue outlook, and strong financials. The recent earnings release has solidified investors’ expectations.

KLAC has an average broker rating of 1.58, indicating a favorable analyst sentiment. Of the 16 Wall Street analysts that rated the stock, 8 rated it “Strong Buy.” Moreover, KLAC has an impressive earnings surprise history, with the company beating consensus EPS estimates in each of the trailing four quarters. The consensus revenue estimate of $6.07 billion for the fiscal year 2021 indicates a 4.6% growth year-over-year. Its EPS is expected to grow at 5.3% for the quarter ended December 2020 and 13% in the subsequent quarter. This outlook should keep KLAC’s price momentum alive in the near term.

Why is the Stock Market Tanking Now?

About the Author: Manisha Chatterjee

Since she was young, Manisha has had a strong interest in the stock market. She majored in Economics in college and has a passion for writing, which has led to her career as a research analyst.

The post KLA Corp. Just Reported Earnings: Should You Buy Now? appeared first on StockNews.com
Data & News supplied by www.cloudquote.io
Stock quotes supplied by Barchart
Quotes delayed at least 20 minutes.
By accessing this page, you agree to the following
Privacy Policy and Terms and Conditions.