By: StockNews.com
Advanced Micro Devices (AMD) is benefiting from the growing gaming, computing, and data center spending amid the pandemic as evident from its recently released financial results. However, the stock has lost 0.8% in the past month and still seems overvalued by traditional measures. Find out if it’s time to buy AMD based on its solid earnings and steadily growing revenues.

Advanced Micro Devices (AMD) designs and produces microprocessors for the computer and consumer electronics industries. The company has benefited from the strong adoption of the 7nm chip-based Ryzen and Radeon, and second-generation Epyc server processors, and 5nm chips. This is due to a rapid increase in the usage of artificial intelligence and machine learning in both cloud gaming and supercomputing. The company operates in two segments – Computing & Graphics (C&G), and Enterprise, Embedded & Semi-Custom (EESC).

AMD has recently reported its third quarter results, once again setting record revenue and trebling its EPS. Top-line increase 56% year-over-year and 45% sequentially to $2.8 billion. The growth was driven by higher revenue in both the operating segments. Net income for the quarter came in at $390 million, growing 225% year-over-year. EPS nearly tripled to $0.32 compared to the year-ago value of $0.11. 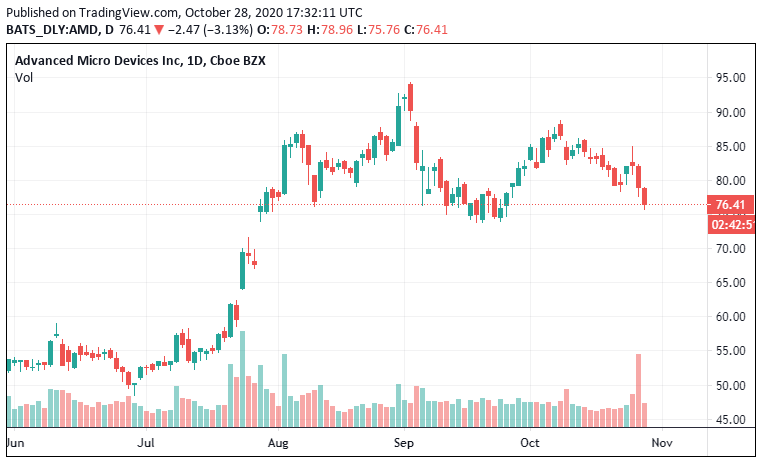 The EESC segment contributed $1.13 billion to the total revenue, growing 116% year-over-year, due to increased Epyc processor sales. The C&G segment revenue came in at $1.67 billion, rising 31% from the year-ago quarter, driven by a significant increase in its Ryzen processor sales. Operating income was $449 million compared to $186 million a year-agoyear ago and $173 million in the prior quarter.

AMD had $1.77 billion in cash and short-term investments at the end of the last reported quarter, up 46.3% from the same period last year. While its current liabilities increased by 30% year-over-year, it has a current ratio of 2.3, indicating that it has enough assets to pay any short-term liability. Moreover, long-term debt decreased from $1.07 billion last year to $373 million.

With the robust growth in its operating results and impressive financial health, the stock gained 72% year-to-date. However, because of an expensive valuation and a number ofseveral other factors, AMD has a “Neutral” rating in our proprietary rating system.

Here is how our proprietary POWR Ratings system evaluates AMD:

AMD is benefiting from booming demand for high-end gaming graphics cards as households across the globe have directed a significant portion of their entertainment spending into online gaming due to the stay-at-home normal. Consequently, the company’s performance in the server, PC, and laptop sales remains strong. However, AMD has a trailing-twelve-month price-to-earnings (P/E) ratio of 72.37, much higher than the sector average. Furthermore, the stock is trading at 68.02x its forward EPS. So, AMD is quite overvalued now.

Moreover, the company has recently announced that it will acquire Xilinx (XLNX), a leader in the field programmablefield-programmable gate arrays. The combination has created the industry’s leading high-performance computing company, significantly expanding the breadth of AMD’s product portfolio. The deal is an all-stock transaction valued at $35 billion, with AMD taking advantage of run-ups in market value. However, the potential risk is that the deal could be targeted by Chinese regulators and might not get approved depending on the US-China relations.

In terms of proximity to its 52-week high, which is a key factor that our Buy & Hold Grade takes into account, AMD is not positioned well. The stock is currently trading 16.3% below its 52-week high of $94.28.

Looking at the past three years, the stock is up more than 565% due to the strong GPU demand, rising data center revenue, and strategic collaborations. As part of the second-quarter results, AMD mentioned, “We reported our fourth straight quarter with greater than 25% year-over-year revenue growth, highlighting our significant customer momentum.” Revenue grew at a CAGR of 17.3% over the past three years.

Moreover, Deutsche Bank analyst Ross Seymore is concerned that the pace of gross-margin improvement may slow given continued semi customsemi-custom ramps in second-half 2020 and in 2021 as a whole. He believes continued but slowing quarter-on-quarter and year-on-year growth in servers, after a strong first half of 2020, seasonal growth in personal-computer CPUs, and a lull in PC ahead of a fourth quarterfourth-quarter product-driven rise.

AMD is currently rated #52 out of 86 stocks in the Semiconductor & Wireless Chip industry. Other popular stocks in the group are Taiwan Semiconductor Manufacturing Company Ltd. (TSM), QUALCOMM Incorporated (QCOM), and NVIDIA Corporation (NVDA). While NVDA has gained 128.1% year-to-date, TSM and QCOM have returned 51.9% and 45.7%, respectively, over this period.

AMD is part of the StockNews.com Semiconductor & Wireless Chip industry, which is ranked #6 out of the 123 industries. The companies in this industry make semiconductors (chips), and other components used in electronic devices. The industry initially struggled to cope with the sudden market changes brought by the pandemic but the challenges reduced as demand eventually smoothened from the growing gaming, visual computing, and data center spending as people and organizations have adopted the work-and-learn-from-home trend.

Overall, AMD is rated a “Neutral” despite its impressive quarterly results and strength in its fundamentals because of its hefty valuation and weak price momentum as determined by the four components of our overall POWR Rating.

The stock has soared so far this year, despite instances of profit bookings. AMD’s short interest dipped to a 10-year low as market sentiment once again turned bullish last month. However, bears might soon take-charge. Moreover, investors are not willing to pay a huge premium for AMD's growth. The stock could be attractive at a lower valuation given its fundamental strength.

Analyst sentiment, which gives a good sense of a stock’s future price movement, is not impressive for AMD. Of the 38 analysts that rated the stock, 20 have given it a “Hold.” Thus, we can expect some short-term weakness.

Why is the Stock Market Tanking Now?

About the Author: Sidharath Gupta

Sidharath’s passion for the markets and his love of words guided him to becoming a financial journalist. He began his career as an Equity Analyst, researching stocks and preparing in-depth research reports. Sidharath is currently pursuing the CFA program to deepen his knowledge of financial anlaysis and investment strategies.

The post Advanced Micro Devices Just Reported Earnings: Should You Buy Now? appeared first on StockNews.com
Data & News supplied by www.cloudquote.io
Stock quotes supplied by Barchart
Quotes delayed at least 20 minutes.
By accessing this page, you agree to the following
Privacy Policy and Terms and Conditions.