What Are The Best Penny Stocks On Robinhood To Buy Right Now? 4 To Watch

By: Penny Stocks to Buy, Picks, News and Information | PennyStocks.com - Feed
Are These Robinhood Penny Stocks On Your Watch List Right Now?

One of the fastest-growing platforms for trading penny stocks in 2020 is Robinhood. Like it or hate it, Robinhood has scaled up to 13 million users, growing even more popular. Despite the multiple shortcomings of the app, black-outs, glitches, etc., new traders remain captivated by its ease of use and accessibility.

The gamification model has certainly taken hold and now other trading apps like Webull are also beginning to hit the mainstream. Boasting opportunities of gaining free shares of stock, Webull and Robinhood are changing the face of traders, today. What’s more, is that these traders are also fueling a rise in the popularity of penny stocks. Additionally, the pandemic has also helped “create” new penny stocks that have attracted traders. Some of the bigger stocks that typically traded above $10 crumbled earlier this year to become stocks under $5. At a seemingly “steap discount,” novice traders flocked to get a piece of the action.

The Wall Street Journal recently cited some eye-opening stats. Retail activity accounted for almost 20% of trading volume this year, nearly double the level from 2010, according to Bloomberg Intelligence. JMP Securities estimates some 10 million new online-brokerage accounts have been created in 2020, about half at Robinhood Markets Inc. The Journal also cited data on competitor Webull’s platform. The company said about 56% of the U.S. stock trades it has handled this year were in stocks under $5.

So with an obvious panache from newbie traders, these mobile options have brought a wave of new action to the stock market. Heading into the new week, will these penny stocks on Robinhood, Webull, and others be on the list to buy or sell?

It’s no secret that Nokia (NOK Stock Report) might’ve dropped the ball during the next half of the year. After reaching highs of $5.14 in August following a 5-month bull rally, NOK stock has dramatically tumbled. In fact, the 5G penny stock reached lows of $3.72 in September. Since then, it’s been a very volatile ride yet the overall trend has eked out a more bullish stance. But will Nokia be going to the moon any time soon as the Reddit penny stock traders like to say?

Well, to be honest, that is a definitely possibility. Whether or not the actual stock price follows is another topic for a later time. But over the weekend, reports surfaced that Nokia was awarded a $14.1 million by NASA to deploy a cellular network on the moon. Yes, the moon. The grant is part of $370 million worth of contracts signed under NASA’s “Tipping Point” selections. It’s meant to advance research and development for space exploration. The actual deal was revealed last week. Yet the fanfare seems to have begun over the last 48 hours.

In a Bell LabsTweet, the company said, “To the moon! We are excited to have been named by @NASA as a key partner to advance “Tipping Point” technologies for the moon, to help pave the way towards sustainable human presence on the lunar surface…This mission will validate the future of other operational deployments and the potential for human habitation on the moon.”

Considering the fact that NOK stock is one of the more popular penny stocks on Robinhood, it could be one to watch heading into the week. The question now is should traders prepare for lift-off or will this be a failed launch? 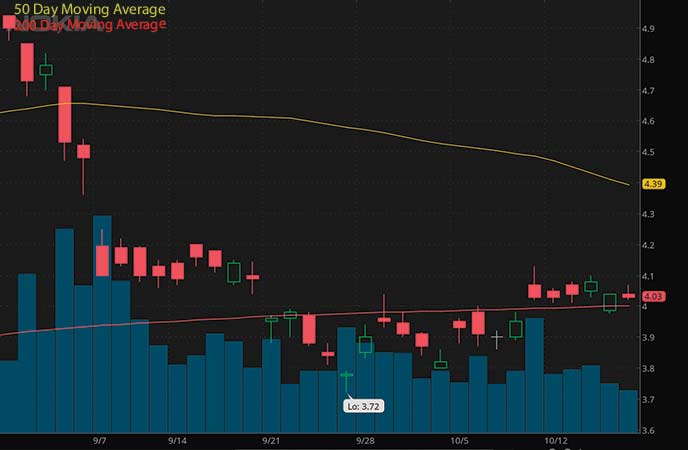 Another one of the increasingly popular penny stocks on Robinhood recently has been Novan Inc. (NOVN Stock Report). It was one of the names we discussed last week and volatility has definitely become a driving force behind NOVN stock. The company announced positive in vitro results of its NITRICIL™ platform technology. Not only was the headline biotech-related but it also wrapped in COVID news too.

The results showed the potential efficacy of its NITRICIL™ as an antiviral against SARS-CoV-2. Novan initiated in vitro assessments targeting the reduction of viral burden on human bronchial epithelial cells to evaluate NITRICIL™ as a potential nasal treatment option.

Despite shares slipping from last Wednesday’s highs, the second half of the week had some followthrough. Furthermore, Friday afternoon, NOVN stock caught a surge of momentum following a Tweet from the company’s Twitter account. It read, “The naturally occurring #antiviral effects of #nitricoxide and the results we have generated from this assessment, provide us with confidence that our NITRICIL platform may be an effective treatment for #COVD19.”

During after-hours trading on Friday, NOVN stock continued higher to finish out the session just shy of $0.60. Will that same momentum carry through into Monday’s opening bell? 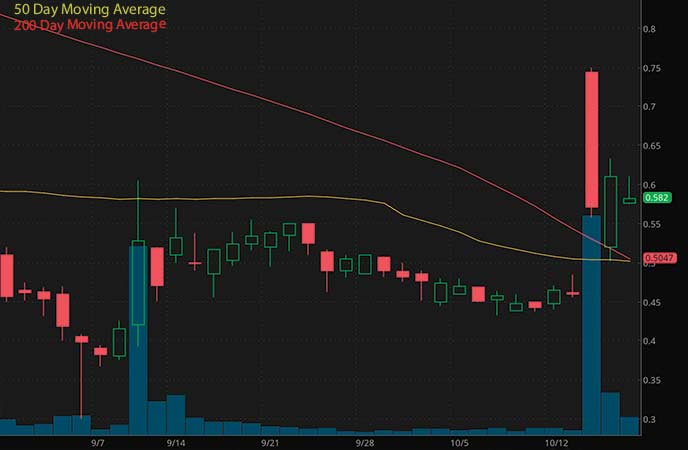 Opko Health Inc. (OPK Stock Report) was in a massive rally for the better part of 2 weeks. Most recently, we started focusing on the company at the end of last month. OPK stock was trying to build a new level of support after pulling back in August. Since that September 21st update, OPK stock rallied more than 49%. But what goes up tends to come back down. In the world of penny stocks, how far that pullback goes depends a lot on what drove the move in the first place. Was it just sympathy momentum or were the company updates the catalysts for the move?

In Opko’s case, the company had made several key updates that actually sparked that rally. Most recently, the company announced that BioReference Laboratories, a unit of Opko, said that it has begun a COVID-19 testing program for New York City schools throughout the 2020-2021 school year. The company said it will collect specimens from principals, teachers, administration, and students from over 950 schools across New York City.

As you’ll see on the OPK stock chart, it experienced a brief consolidation period last Monday. Since then, shares have steadily climbed. Something to note is that before the end of the month Opko reports third-quarter earnings. Needless to say, OPK stock, like NOVN traded higher during aftermarket hours on Friday. 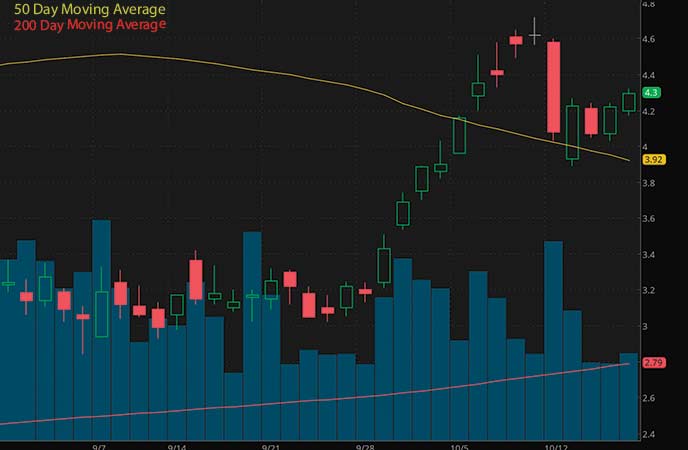 Aspira Women’s Health Inc. (AWH Stock Report) might not have been a name you’ve come across recently. It doesn’t trade millions of shares per day on average. But it does trade several hundred thousand shares and we had picked up coverage on the company among other epicenter penny stocks in September. I know the flavor of the week tends to be high volume penny stocks breaking out, but you can’t ignore stocks with clear trends. In this case, AWH stock has caught some attention for exactly that.

Since September 24th, the penny stocks has managed to climb from around $2.50 to highs last week of $3.98. What’s more is that similar to stocks like NOVN and OPK, AWH stock rallied even higher after the closing bell on Friday.

Last week the Aspira announced that it expanded network access for both its OVA1® and ASPIRA GenetiXSM Testing. Aspira is now a participating provider for all PAR/PPO and Medicare Advantage PPO products of Anthem BlueCross BlueShield of Georgia. OVA1® is used to detect the risk of ovarian malignancy in women with adnexal masses. ASPIRA GenetiXSM testing offers both targeted and more comprehensive genetic testing options with a gynecologic focus.

With more afternoon followthrough on Friday, will AWH stock remain in this latest bull trend this week? 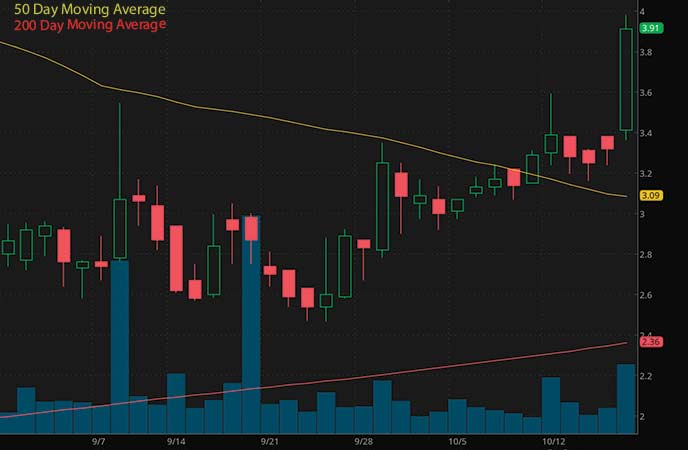 How To Buy Penny Stocks On Robinhood

While it might seem foreign to some, buying penny stocks on Robinhood is as easy as opening up the app and placing your order. Similar to other platforms like TD Ameritrade, Etrade, and Webull, the buy/sell process isn’t much different. But if you’re interested in a bit more information, you can check out this quick video: