By: Penny Stocks to Buy, Picks, News and Information | PennyStocks.com - Feed
5 Penny Stocks To Buy [or Sell] In October 2020

September’s winding down and that means a whole new stable of penny stocks to watch. This past month was definitely wild across the board for small-caps. What began as a slower month has evolved into what we’re familiar with today: huge breakouts from stocks under $5. Once again, premarket hours welcomed several big breakouts that saw some of these cheap stocks jump hundreds of percentage points.

Last night’s Presidential Debate resulted in downbeat trading on Wednesday morning. However, that has resolved itself and now markets are back on the move. Upbeat sentiment on stimulus hopes has become the focus for investors. But as we’ve become all too familiar with is that both sides of the aisle need to agree.

Aside from that, we’ve got a slew of economic data to sift through. Today’s USA pending home sales figures came out with month-over-month figures pointing at a huge beat versus estimates. August pending home sales came in at 8.8% compared to the 3.2% estimate.

Penny Stocks On Robinhood, Webull, & TD To Watch In October

Furthermore, even in light of US GDP dropping some 31.4% in Q2, economics expect a record recovery. This bullishness has definitely been felt in the stock market today. But there’s no question that October will likely have its own plans in store. In looking at some of the most popular penny stocks on Robinhood and other brokers such as TD and Webull, there’ve been a few names that stuck out.

These platforms in particular have things like discussion boards, chat rooms, and ranking data that some of the other platforms simply don’t offer. This can give a glimpse into certain trends heading into October. Will these be on the list of penny stocks to buy or avoid?

GoPro, Inc. (GPRO Stock Report)has experienced a wild year thus far. Shares of the company sold off with the market in March taking the stock to lows of $2. Since then, GPRO stock managed to bounce back as high as $5.74. But in true fashion, the penny stock wasn’t able to maintain those levels for long and shares have since dropped back as low as $3.74 as of a few weeks ago. Since then, however, GoPro has mounted a bit of a recovery. It managed to break above its 200-day moving average and this week, began testing its 50-day moving average.

One of the key proponents of the stock, ironically has also been GoPro’s CEO, Nicholas Woodman. He recently presented at Citi’s Global Technology Conference. This was right around the time GPRO began reversing course. Woodman not only highlighted subscriber growth for the company, he also explained that the company’s on track to nearly double that by year end.

One of the looming concerns with the company is that it would outgrow its hardware. An initiative put forth has been evolving that into a software product of sorts. The company’s GoPro Subscription platform is a direct to consumer model. It gives access to cloud storage, product discounts, and even replacements.

We’ve seen demand rebound across all geos and all channels. And while dot com has done really well, as we expected, we’ve also seen a stronger-than-anticipated rebound at retail again

With the company’s new Hero9Black was recently debuted. In light of these milestones firms such as Oppenheimer have grown bullish. The firm has an Outperform rating on GPRO right now. The average is more close to Neutral among all analysts covering the penny stock. 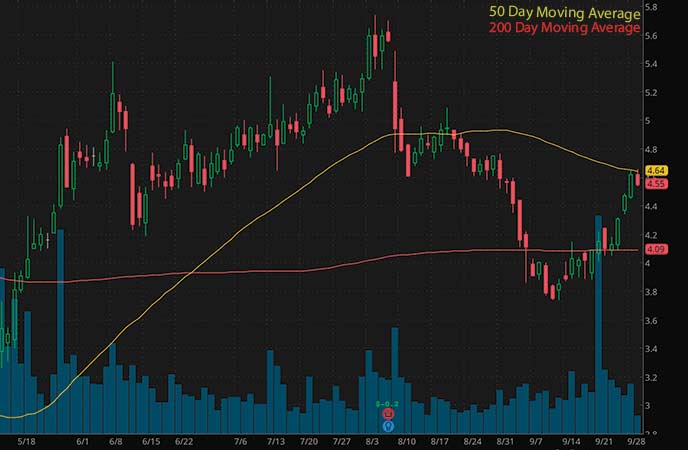 Now, the list of penny stocks for October would be complete without at least 1 marijuana stock. While the industry as a whole is in disarray, there are some pockets of momentum. With the blow that was blown to Aurora Cannabis via Nelson Peltz’s departure, the market took a broader look at the sector recently. One of the main points of focus has been on the North American market as a whole. With the debut of AdvisorShares Pure US Cannabis ETF (NYSE:MSOS), the U.S., in particular, has also come into focus.

With a global footprint, companies like Aphria Inc. (APHA Stock Report) have gained a bit more attention. That and the fact that millions of users looking to trade marijuana penny stocks on Robinhood and Webull can’t access some of the dually listed names like they can on TD Ameritrade, for instance. Nevertheless, the company is far from a pure-play in US cannabis. But it does have some exposure to the budding market through its worldwide license agreement with Manna Molecular Science. Manna products are available in two cannabinoid formulations including combination THC/CBD as well as hemp-derived CBD.

While ACB stock has plunged to its lowest levels in years, Aphria has somewhat weathered the cannabis storm better. Since June, APHA stock is riding along the 200-day moving average for the most part. There was a nice spike in price back in July to highs of $6.15. But once again, consolidation took it right back to the 200DMA. During the final days leading up to October, APHA has bounced off of this level again and extended a 4-day uptrend.

In light of the upcoming Presidential election and proposals on the table for more cannabis legislative measures, APHA could be one of the pot penny stocks to watch in October. 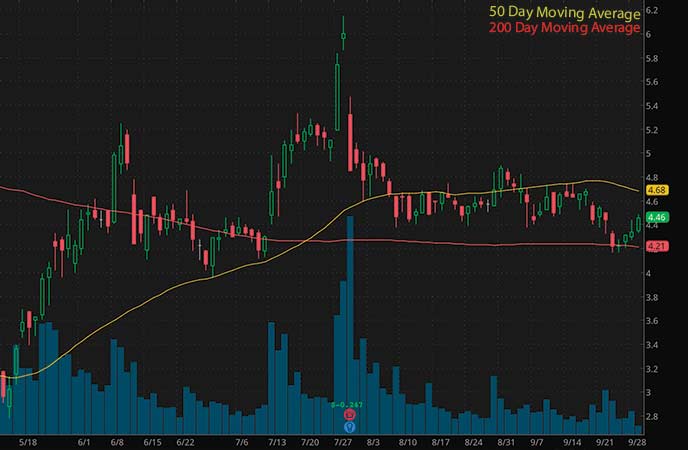 TherapeuticsMD, Inc. (TXMD Stock Report) is another one of the penny stocks that had a strong last few quarters. However, during the second half of Q3, things fell apart a bit. The initial cracks formed after reporting its Q2 earnings results. TherapeuticsMD posted an EPS miss for the quarter with a $0.19 loss per share compared to estimates of an EPS loss of $0.17. The company did, however, record a sales beat for the quarter, edging out estimates by about $500k.

These results saw analysts like Jefferies downgrade the penny stock to Underperform. The firm also dropped its price target to $1.20 from $1.25. Heading into October, however, there are some tailwinds boosting TXMD right now. health Canada recently approved the company’s BIJUVA® capsules treating vasomotor symptoms associated with menopause. This came a few weeks after TherapeuticsMD secured a US patent for its contraceptive, Annovera. The company also said that based on its communications with the US Patent and Trademark Office, a third patent for Annovera should be issued soon.

[Read More] 3 Penny Stocks To Buy Under $3; Are They Worth The Risk? 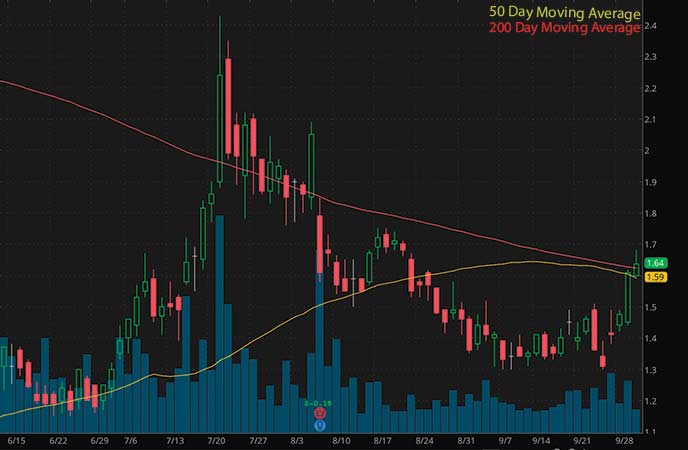 One of the topics during the Presidential debate has already focused on the economy. Reopening is obviously the goal of both candidates. The paths forward, however, are different. Regardless of this, some of the “reopening stocks” or “epicenter penny stocks” remain a focus. Originally coined as a term by Tom Lee of Fundstrat, these are some of the stocks that were hurt the most by COVID lockdowns.

Hypothetically speaking, in light of a sharp economic recovery, Lee had explained these could be the ones to benefit the greatest. That’s still working itself out as we speak but in the mean time, it might not hurt to have some epicenter penny stocks on your list in October.

AMC Entertainment Holdings Inc (AMC Stock Report) is one of the obvious names hurt most by COVID. Social distancing measures and gatherings of mass amounts of people are lifeblood to movie theaters. AMC has begun reopening its locations across the U.S. Earlier in September the company had reopened nearly 80% of its U.S. theaters in major markets. The company has also monitored its cash position closely.

AMC recently announced an offer to sell up to 15 million shares to raise funds for the company. The knee-jerk reaction resulted in a market sell-off. However, heading into the start of October, AMC stock has managed to put in higher lows over the last 5 consecutive trading days. Will this be one of the penny stocks on your “reopening watch list” next month? 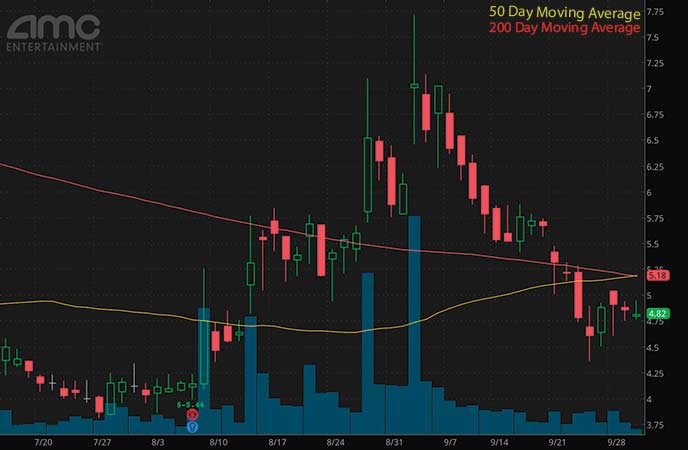 Finally, Nokia Oyj (NOK Stock Report) is back on the list of penny stocks to watch in the fourth quarter. The stock had a strong move into its last earnings report. But since then, NOK has sold off hard. The penny stock went from a high of $5.14 in August to recent lows of $3.72. These are some of the lowest levels Nokia has traded at since May. One of the triggers for the sell-off may have been from the rise in tech, in general. While stocks like Tesla and Apple, even Verizon surged, this $5 stock barely moved.

Long-term holders may have simply gotten impatient while watching other stocks surge. It also may have something to do with the sales miss from its most recent earnings. Nokia recorded sales of $5.61 billion which missed the $5.7 billion analysts had expected. The company also saw a change in CEOs at the start of August with Pekka Lundmark filling the position previously held by Rajeev Suri who held the position since 2014.

Needless to say, Nokia continues pursuing its foothold as one of the top 5G stocks to watch in 2020.  In June, it signed a data center infrastructure deal with Tencent and Baidu. It also ran a successful trial of the “RAN Intelligent Controller” over AT&T’s commercial 5G network. The companies are co-developing this software platform to boost interoperability and enable rapid service deployments.

In addition to it strong earnings in July, August saw Nokia ink a few more deals and even win a patent injunction against Daimler in Germany. Closing out September, Nokia also won a deal with Britain’s biggest mobile operator BT to supply 5G radio equipment. Does this mark the first of many big milestones for Nokia’s new CEO heading into October? 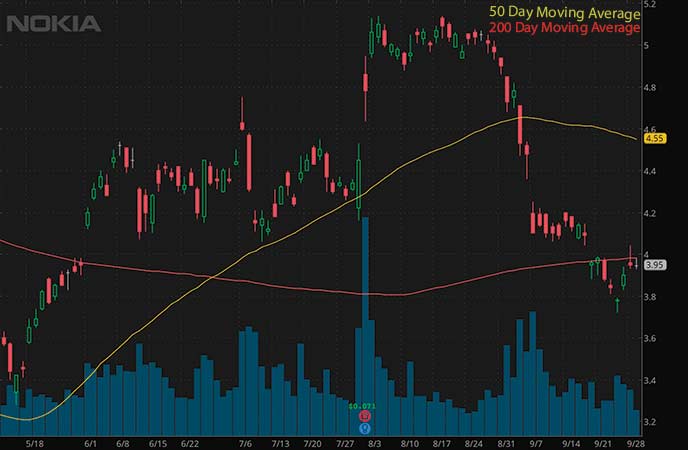