Are Penny Stocks Worth It? 3 To Watch In September 2020

What’s one thing we can irrefutably confirm about penny stocks? No matter how you slice it, you’re going to encounter a high-risk scenario compared to blue chip stocks. The lower price and higher volatility are just a few things to factor in. You also can’t forget how some of these companies raise funds either. There’s no secret that companies go public in the first place to raise money through equity. But the price or value, rather, that they raise funds at is the unknown variable.

\While you’ll see companies like Apple or Tesla raising funds through lower-interest bonds, for example, penny stock companies tend to raise funds using discounted convertible notes. The price at which those notes convert can be incredibly low in certain cases. So not only do you have to consider volatility risk but also dilution risk.

This is why you’ll sometimes see certain penny stocks breakdown after announcing a financing deal. In those cases, even without looking at the terms, the breakdown usually takes shares down to or even below the offering price. This isn’t to say that all penny stocks are cutting huge discounted deals to funds. But it isn’t important to make sure you read through corporate filings just as frequently as you would company news releases. With this in mind, here’s a list of penny stocks to watch before next week; are they worth the risk?

Northern Dynasty Minerals Ltd. (NAK Stock Report) is one of the penny stocks that has been on watch lists for months. Since April, NAK stock has been red hot. It managed to move from $0.40 on April 1st to highs of $2.49 by July 22nd. Some confusion on the future of its Pebble Property in Alaska was the source of a lot of bearish sentiment in the market over the last few weeks. NAK stock even experienced a massive gap down in late-August following widespread opposition in the Trump Administration over environmental concerns related to the property.

However, the company took the reigns shortly after and published a USACE Alaska District Letter, which guided the policy for Pebble. Pebble Limited Partnership issued a statement that refuted inaccuracies from certain publications. It also cited the Washington Examiner, which confirmed that the U.S. Army Corps of Engineers’ letter to the company on Aug. 20, 2020, is the “guiding policy” on the project.

“We have confirmation of what we have known for some time – the policy position regarding Pebble comes directly from the Alaska District and it is exactly what we have been telling the media and other stakeholders all week.”

Over the last 2 weeks, NAK stock has been on the recovery trail. Since August 25th, shares have bounced back by as much as 110%. Wednesday’s trading saw another big day of trading for NAK stock, which traded more than 34.4 million shares and jumped over 15% during the session. 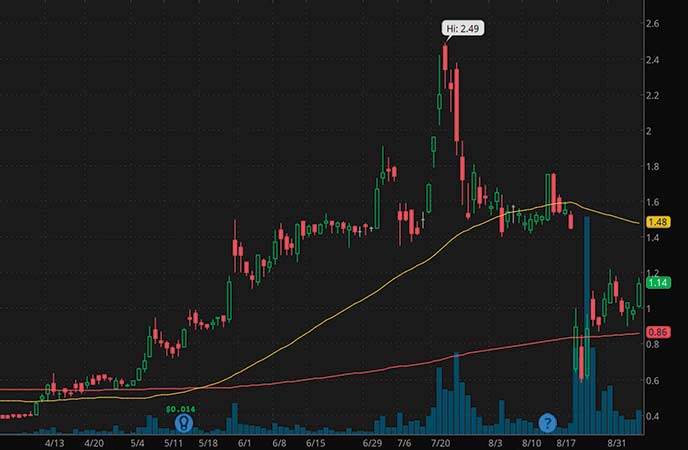 Chembio Diagnostics Inc. (CEMI Stock Report) was actually one of the penny stock unicorns earlier this year. From March 17th to April 23rd, CEMI stock jumped from around $2.40 to highs of $15.89. That 562% rally was mainly fueled by COVID-related headlines, speculation, and corporate milestones. In fact, I don’t think many traders thought this would come back to penny stock territory.

Up until mid-June, that appeared to be the case. However, CEMI stock took a huge hit just a few weeks before Q3 began. The drop came after the FDA revoked authorization for Chembio’s COVID-19 antibody test. The main reason was based on performance concerns with the accuracy of the test itself. After a brief reprieve between July and August where CEMI appeared to have gained some footing, it pulled back heading into September. So why is it even on a list of penny stocks to watch?

During the last two sessions, CEMI stock has experienced strong price movement and higher volume. It may have something to do with its latest update. This week Chembio announced its initiation of the notification process and submission of an application for Emergency Use Authorization to the U.S.FDA for its new rapid antibody test system, DPP SARS-CoV-2 IgM/IgG. Will this be the tipping point turning things around for CEMI or is it just a pitstop amid a longer-term downtrend? Comment below if this is on your list of penny stocks in September. 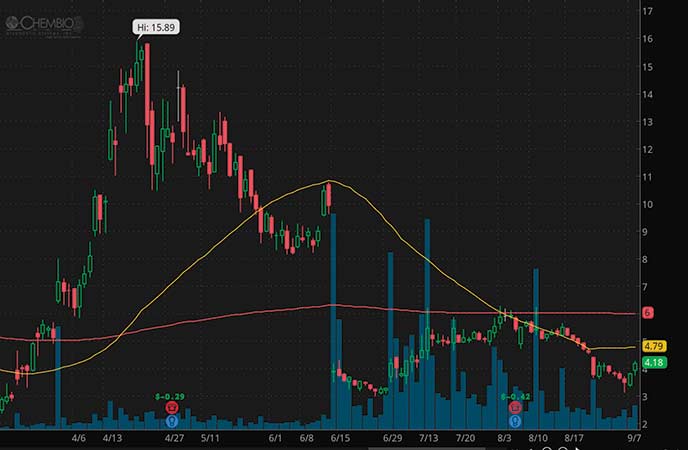 Another one of the penny stocks attracting interest this quarter is Precipio Inc. (PRPO Stock Report). We started following PRPO stock at the end of July as the company entered into an agreement with ADS Biotec. It was for the distribution of its FDA-authorized COVID-19 serology antibody tests that had also received Emergency Use Authorization. Currently, the company has the ability to produce 1 million tests per day as it prepares for the US Food and Drug Administration’s Emergency Use Authorization to use the test kits for both point-of-care and self-use.

The development sparked a strong move in shares of PRPO stock. In fact, PRPO jumped from around $1.40 to highs of $8 in a single day. As you’ll clearly see, shares came falling back down. While there weren’t any major negative headlines, it was a period where some COVID-related stocks were experiencing selling pressure. Meanwhile, Precipio continued to report new developments. One of the reasons that PRPO stock is on the watch list right now has to do with upcoming events. Namely, the company has a shareholder call set for September 9th after the closing bell.

The purpose of the call will be to discuss the company’s COVID-19 progress and future plans. During the last 3 consecutive trading sessions, PRPO stock has climbed. Since last Friday, the penny stock is up over 40%. Is this momentum a buildup to a “buy the rumor, sell the news” or is PRPO stock set to continue this uptrend through September? 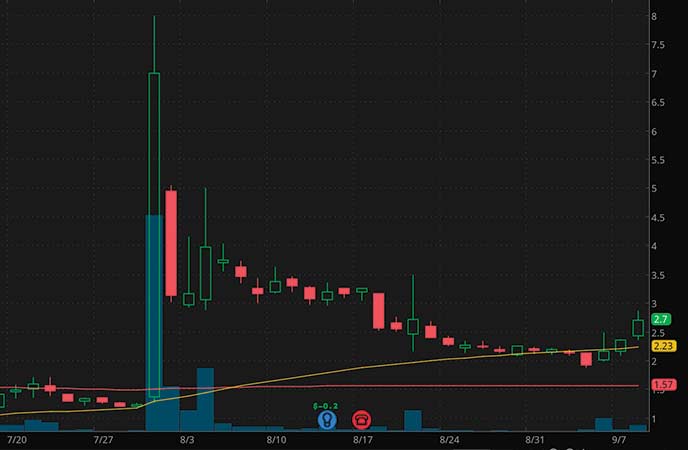