Education Then: Entering the Digital Vortex

Join us for a new two-part blog series from #EducationNow on the Digital Vortex from Ronaldo Mota, a member of the Brazilian Academy of Education.

What is the "Digital Vortex?"
A vortex refers to a rotating flow, with circular or spiral lines, around a center of rotation. It is a whirlpool that draws, absorbs and transforms. The digital vortex reflects the attractive centrality that digital technologies represent in the contemporary world.

Sectors such as media and entertainment, telecommunications, online retail and banking services have already been engulfed by this attracting center. Others, such as consumer goods, tourism and education industries, strongly feel the proximity of the sink. But everyone, whether they have done so already or are facing it down today, will inexorably go through this process.

Human history describes a sequence of permanent changes, sometimes slower and sometimes faster. The past century illustrates an accelerated rate of change, where evolutions previously spread across millennia of transformations occurred in a single century.

There are extremely rare cases, such as the current moment, associated with the COVID-19 pandemic, where the best characterization is of extremely rapid change. These are extraordinary episodes, singularities, where we experience changes that, in general, would last for years or a decade. Now, we are seeing them occur in a few weeks or a few months. What we are witnessing today, at this very moment, will affect all sectors and aspects of society – particularly education.

Learning throughout history
Change in education is not new. The practice of learning is almost as old as homo sapiens itself. Our ancestors, in the first societies, left evidence of well-defined learning cycles. The older taught the younger, from generation to generation, with remarkable rituals of passing from one phase of life and education to the next. They prepared their young for hunting, for survival in the open field, for domestic chores, and so on.

Around the 5th and 4th centuries B.C. the school, as we know it today, energed in Athens. Plato’s Academy and Aristotle’s Lyceum are historical records of this birth.

In the 15th century, almost two millennia after Athens, the advent of the modern book occurred with Gutenberg’s press, which allowed the school to reach an unprecedented scale. It is interesting to note that the modern book appears shortly after the end of the Black Death, or the Bubonic Plague, which decimated one-third of the population of Europe.

Colliding factors prepared the European terrain for the Greco-Roman Renaissance. It is during this period and the following Enlightenment when universities were born or consolidated, providing the academic climate that heralded the birth of modern science (with Galileo Galilei, Isaac Newton and others at its center) and the maturation of the scientific method.

In this context, science engendered new technologies (the steam engine among them), making the flourishing of the Industrial Revolution possible in the following centuries.

Moving toward a digital vortex
The twentieth century, in turn, represented the most mature stage of modern society. It was a miraculous century, one where life expectancy nearly doubled from 43 years at the beginning of the century to around 76 years by its end.

The school, in the broad sense, not only contributed directly to this, but also had the competence to supply the need for new professionals. In higher education, there were essentially five careers at the beginning of the century: doctor, engineer, lawyer, priest or teacher. By the end of the century, there were more than a hundred new occupations. Education, in the 20th century, via teachers, students and administrators, fulfilled with extreme competence, brilliance and gallantry what their society demanded.

The 21st century, particularly for education, is a turning point. Facilitated by the advent of digital technologies in this century, each decade represents what used to take a century previously in terms of radical change.

Explore how Cisco is transforming education

The path to today
In each of these times, a unique set of conditions gave birth to a new iteration of education. The factors of each era swirled within the vortex, pulling toward the center and yielding change. The spiral slowed and sped: with moments like the schools of Athens, the Bubonic Plague, the Renaissance, the Englightenment, the Industrial Revolution, and the twentieth century giving jolts to the way humans educated, questioned, and learned.

Join us for the second blog in the Digital Vortex series of #EducationNow, “Education Today: Exploring the Digitial Vortex” next week, as we explore the ways that this time of intensified change will propel education. 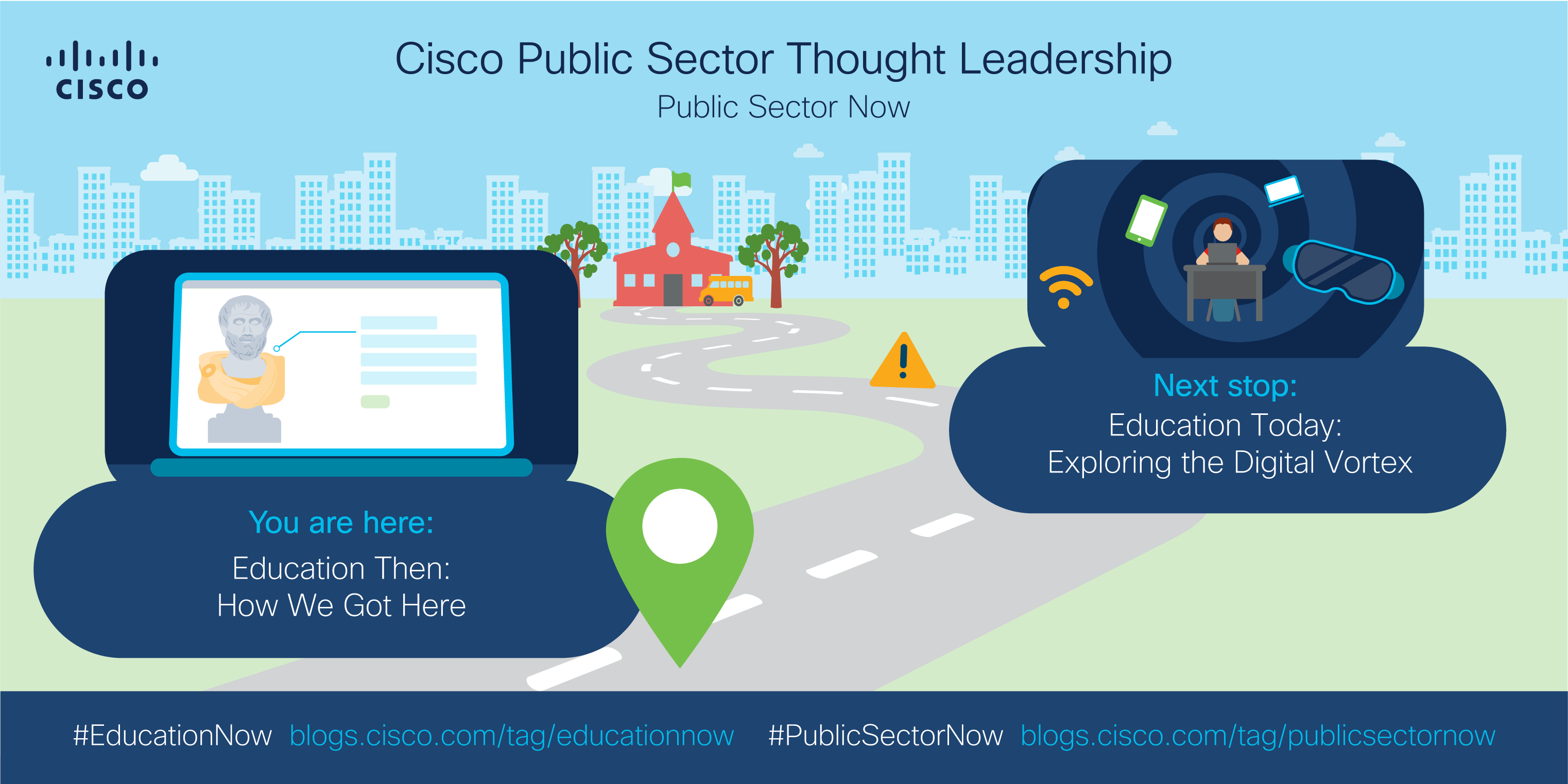 Tweet me: Education Then: Entering the Digital Vortex https://bit.ly/32jLzie @Cisco