By: TechCrunch
Creative professionals whose livelihoods have been impacted by the COVID-19 outbreak are flocking to membership platform Patreon in record numbers, the company claims. During the first three weeks of March, more than 30,000 new creators launched on the site — a much larger number than usual. These creators are also acquiring patrons faster than ever […]

Creative professionals whose livelihoods have been impacted by the COVID-19 outbreak are flocking to membership platform Patreon in record numbers, the company claims. During the first three weeks of March, more than 30,000 new creators launched on the site — a much larger number than usual. These creators are also acquiring patrons faster than ever and they’re expanding their earnings at a quicker pace, as a result.

Creators around the world are being affected by the COVID-19 outbreak, often indirectly. To cut down on the spread of the novel coronavirus, live shows are being canceled and conferences and other events are being postponed. Other revenue streams creators may have previously relied on may be drying up, as well.

Many of these impacted creators have joined the Patreon platform in recent days to help with lost revenue and their fans have quickly followed.

According to Patreon’s internal metrics, average new patron growth across the U.S., U.K., Canada, Germany, Australia, and Italy is up 36.2% in March compared to February.

Since then, creators have been joining the platform at a faster rate than at any other point in the company’s history.

In addition, the proportion of creators who acquire their first patron within 10 days of launching has also increased. This is one of the strongest influxes of memberships Patreon has seen, the company said.

Today, Patreon’s platform serves over 150,000 total artists worldwide who generate income by offering exclusive content and communities to a network of over 4 million patrons across 180 countries. To date, creators have earned over $1 billion through the Patreon platform. 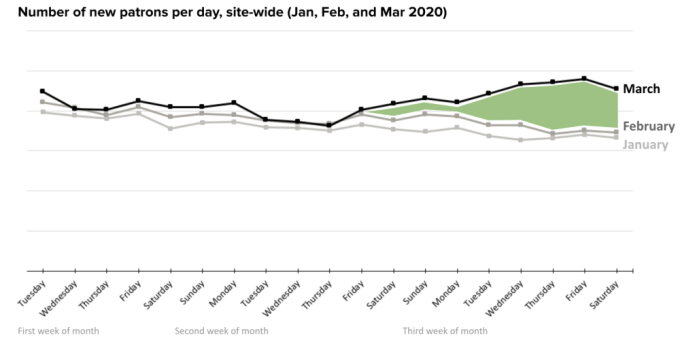 However, it’s not all good news. Patreon also notes it’s seeing slightly higher patron deletions as some members are choosing to exit the site due to financial hardships related to the COVID-19 crisis. But overall churn rates are stable for now, Patreon says, and the deletions are not at a rate other businesses are seeing.

Patreon isn’t the only platform seeing significant growth due to the societal impacts of COVID-19.

Fundraising sites like GoFundMe have also seen increases in recent weeks as people ask for assistance with living expenses, food and other basics, small business support, healthcare expenses and more.

More than 22K coronavirus related fundraisers have been created on our platform in the past several weeks—collectively raising over $40M to support hospitals, local businesses, & organizations helping on the frontlines around the world.

GoFundMe recently said that over 22,000 coronavirus-related fundraisers were created on its platform over the past few weeks, collectively raising over $40 million to support hospitals, businesses, and other organizations. The company said it would commit $1.5 million to support communities impacted by the pandemic, as well.