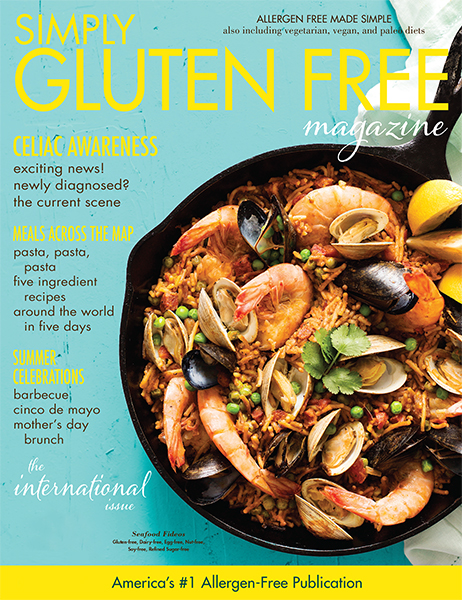 Simply Gluten Free is published by Edgewater Park Media, Inc. and was launched in 2012 by founder and editor-in-chief Carol Kicinski. Kicinski, who has been gluten free for more than 25 years, started her blog/website of the same name in 2007 and later decided to publish a print magazine under the same name.

Gluten Free & More magazine is published by Belvoir Media Group and has been in publication for more than 20 years. The company approached Kicinski about the merger after their editor-in-chief announced her retirement.

“It made sense to work with Carol,” said Tom Canfield, Vice President of Circulation/Partner of Belvoir Media Group. “Not only is she gluten free herself, but she started a magazine at a time when starting a print publication was not the most advised thing to do. She defied the trend of ‘going digital’ when she went the opposite and went print – successfully! This gave us immense confidence in her ability to carry on the Gluten Free & More history.”

This merger means a larger combined circulation and 27+ combined years of commitment to the gluten-free community, all under one magazine. This helps advertisers to reach a wider audience by using less of their marketing budget and it helps readers by having to subscribe to only one magazine to get the best content and see the widest variety of popular gluten-free products advertised in one place.

Simply Gluten Free is a gluten- and allergen-free brand founded by Carol Kicinski. Carol is a magazine editor-in-chief, monthly syndicated TV chef, cookbook author and popular website blogger. Diagnosed with gluten sensitivity more than 20 years ago, Kicinski has since become a well-known gluten-free personality and recipe developer. She is the founder and editor-in-chief of Simply Gluten Free magazine, one of the top gluten-free magazines in America. Carol is in her seventh season as a monthly syndicated gluten-free chef on NBC-based WFLA-Tampa Bay’s Daytime TV show. She is the author of four successful cookbooks and has been published in more than 650 newspapers and magazines across the country. Simply Gluten Free can be viewed at www.SimplyGluten-Free.com.